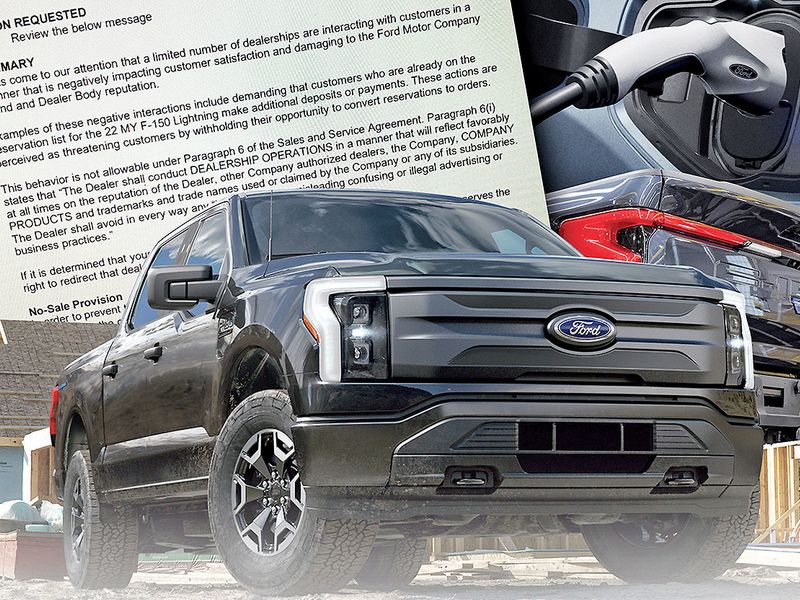 A year ago, Jannell Ford in Hanover, Mass., promised to charge no more than sticker price for the highly anticipated Bronco SUV. But that was before the industry’s microchip shortage led new-vehicle inventory to dry up.

For Ford’s next hot product, the F-150 Lightning electric pickup due out this spring, the dealership is charging a $5,000 premium. General Manager Bill Roderick said he’s upfront with customers about the markup and believes it’s justified because his store’s allocation is expected to be small, given the truck’s nationwide appeal and Ford’s early production constraints. Jannell Ford received just 20 Broncos last year that generated low margins after a challenging and time-consuming ordering process.

“It’s supply and demand, and for the amount of work that goes into it, it needs to yield a little bit more,” Roderick said. “I don’t like overpricing anything. I don’t want to. But at the same time we have to keep the doors open and feed mouths here.”

Heavy demand for the electric truck is good news for an automaker that before the chip shortage often struggled to sell vehicles without big, profit-eating discounts. But Ford now worries that the markups of up to $30,000 some retailers are demanding could be harmful as well, irking the consumers it’s trying to win over and driving them to rivals such as Tesla and Rivian that don’t have franchised dealer networks.

“That’s precisely why we’re working with [dealers] to address this as quickly as possible,” Kumar Galhotra, Ford’s president of the Americas and International Markets Group, told Automotive News. “If that happens, that’s obviously a huge disappointment for our brand, for our network and the entire enterprise. For the long-term health of the brand and the company, it’s important we stay as close to the MSRP as possible.”

Ford sales boss Andrew Frick this month sent dealers a letter threatening to withhold their allocation if they required “additional deposits or payments” from customers. A spokesman confirmed to Automotive News that the letter was in response to reports of significant markups on the Lightning.

Although the automaker can’t force retailers to charge a certain price, Ford spokesman Mike Levine has responded on Twitter to people frustrated with their experiences and recently tweeted tips on how to switch dealers and avoid added fees.

Although Ford has nearly 200,000 reservations for the Lightning, that’s no guarantee the truck will be a success, especially with more competition on its tail. After General Motors began collecting deposits this month for the Chevrolet Silverado EV, some Chevy dealers vowed to charge less than sticker price when it arrives in 2023.

Dealer markups are neither a new phenomenon nor unique to Ford. Inventory shortages across the industry over the past year prompted stores that sell numerous brands to tack on “market adjustment” charges of varying sizes on many scarce nameplates.

“It’s the blessing and the curse of a free market and capitalism,” Karl Brauer, executive analyst at iseecars.com, said in an interview. “If you’re really creative, you can almost always find a way to make a buck on something people want to buy.”

Galhotra said Ford’s internal pricing data shows that more than 90 percent of its dealerships are charging around sticker price on key new models.

“The issue we’re trying to address is around a very small part of the network,” he said, “and we’ll work with them to get it right.”

Jack Madden Ford in Norwood, Mass., initially planned to charge an extra $2,500 on Lightnings but removed the fee after customers complained, owner Jack Madden said in an interview.

“The pushback was pretty strong,” he said. “We collectively decided that we’d sell them for whatever the retail price is and we’d live with that. A lot of people are angry about it, and management at Ford feels it’s the wrong thing to do.”

Madden said the store planned to charge the markup because of low inventory. The dealership sold 77 vehicles in December and received only 10 vehicles from Ford for the month, he said.

The automaker has warned that the chip crisis likely will linger through the rest of this year and is pushing a custom order-based system to make up for the lack of available inventory.

“If the market in general is not supplying the base-level demand the buyers want, everything goes up in price, and in that environment the hot-ticket cars are that much more desirable,” Brauer said. “The forces on demand versus supply going on right now are only adding to the potential for this kind of behavior.”

Richard Bazzy, owner of Shults Ford-Lincoln in Wexford, Pa., said he won’t charge more than sticker price for the Lightning and believes marking up sticker prices is a bad strategy.

“It’s brand-destroying,” Bazzy said. “There’s nothing good about it. Most dealers have enjoyed either the best or one of the best years financially that we’ve ever experienced. Why want more? It’s almost gluttony.”

Frick’s letter cited a provision in Ford’s franchise agreement that requires retailers to conduct business in a way that doesn’t damage the reputation of the company they represent. Aside from withholding allocation or advising customers to take their business elsewhere, there’s little else the company can do.

Roderick admits he’s likely to get some pushback for his dealership’s extra $5,000 charge, but he said some customers have agreed to it while converting their reservation into a firm order.

A vast majority of Jannell Ford’s new-vehicle inventory is sold at sticker price, but Roderick said the store likely will continue to charge more for certain hard-to-get products as long as overall supply remains low.

“At the end of the day, we’re a manufacturer representative, but we’re a small, 100-year-old company that’s employing 40 people,” he said. “That’s more important — staying in business and being profitable — than anything. What do we have if we’re not here?”