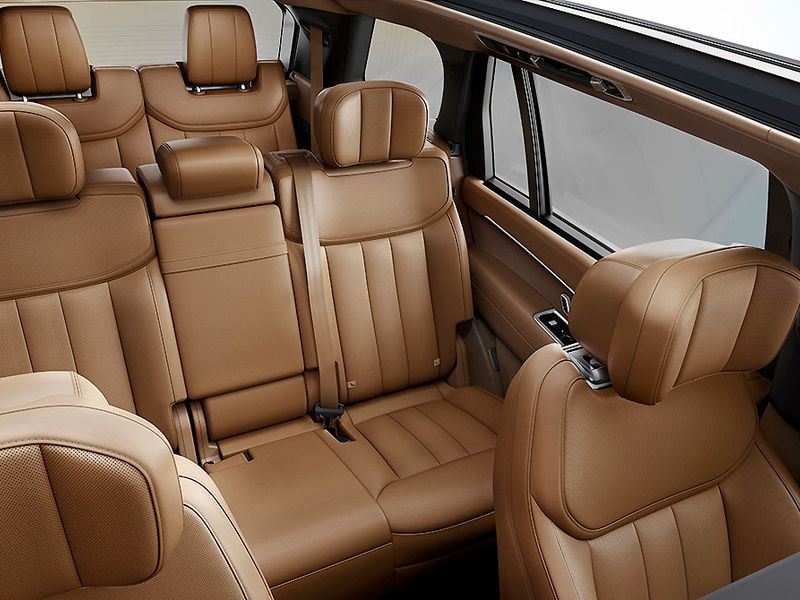 When engineers went to work designing the fifth-generation Range Rover in 2016, the iconic luxury off-road SUV had to be capable of doing something no Range Rover has ever done before: carry seven people over the river and through the woods to grandmother’s house.

Every Range Rover built since the first one in 1970 has been a two-row, five-passenger vehicle. That all changes next spring when for the first time a three-row option becomes available in the redesigned 2022 model.

Although the two-row and three-row long- wheelbase versions of the fifth-generation Range Rover share the same body panels and floorpan, adding a third row of seats was a major project that involved nearly every part of Land Rover’s engineering and design teams — interior decorators, electricians, safety experts, the seat team, human-machine interface engineers and others.

The job was complicated by several things:

“When the fourth-generation Range Rover was being created, [around 2005], there wasn’t that competition,” Nick Miller, program chief for Range Rover, told Automotive News. “This time around there definitely is. Land Rover threw the kitchen sink at this program. We absolutely need to maintain our competitiveness and at the same time we’ve added a whole new variant,” Miller said in a video interview from England.

But it wasn’t just a simple matter of installing a stylish set of leather-covered third-row seats and bolting them to the floor.

Miller detailed the considerable engineering effort that Land Rover expended to deliver a third-row experience that luxury customers expect. The major focus areas included ingress and egress, passenger comfort and the vehicle’s utility. Engineers also had to take into consideration the technologies being introduced in the new Range Rover, such as rear-wheel steering and an electronic anti-roll system.

The length of the long- wheelbase 2022 Range Rover has grown by almost 8 inches. That added length comes at the rear of the vehicle and encompasses longer rear doors. That helped solve one problem, but Miller says it’s really the flexibility of the second- and third-row seats that makes the seven-passenger Range Rover more user-friendly. The second row slides forward electrically, or it can fold flat in just 8 seconds to open a clear path to the third row.

“It’s absolutely pivotal that we can move that seat right out of the way. That means the customer has a really big step-in area to get through and it invites them to make use of row three,” says Peter Bingham, architecture chief engineer for MLA high.

Once seated in the third row, passengers will find a low floor so they can maintain good posture. And there are first-class accoutrements, such as face-level ventilation, seat heaters, an armrest, ambient lighting and charging ports for each passenger.

All those items mean there is not a single common piece of interior trim common between the two-row and three-row Range Rovers from the rear doors back.

But engineers did reduce complexity elsewhere. Because the fifth-generation Range Rover was designed from the start to offer a third row, Land Rover engineers were able to develop a single floorpan for the long-wheelbase model. If you were to remove the carpet from a two-row Range Rover and three-row Range Rover, the aluminum pods bolted to the floor of the three-row version would be the only difference you’d see.

Miller could not say how much Land Rover invested in creating the third row. But the way the vehicle has been designed means that it likely won’t have to be re-engineered to meet planned future changes. The axles, for example, have been designed for the heavier weights of additional passengers as well as the battery packs that are coming in the electrified model, Bingham says. Range Rover generations tend to last around a decade or so.

Says Miller: “It’s not just about the design, which is fantastic, but the capability of the design and making people feel that it is special and extremely capable and [can] go wherever you want to take it.”