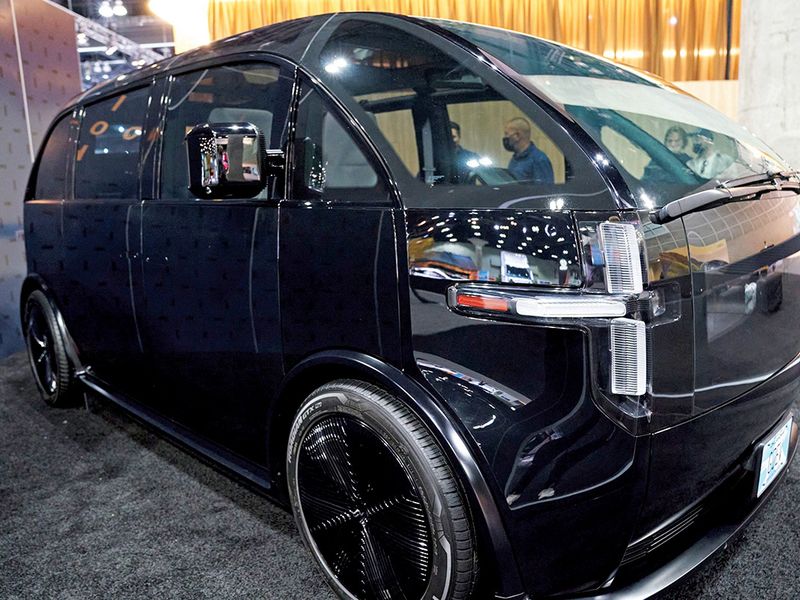 Between the Los Angeles Auto Show and the Guangzhou auto show in China, this month has seen dozens of vehicle debuts — but many came from companies the U.S. industry barely knows. Not yet, anyway.

Unfamiliar brands are emerging for a shot at global automaking, hoping that consumers have a new willingness to look at electric vehicles and advanced technologies regardless of whether they come from established manufacturers or startups.

EV startup Canoo showed a prototype electric van in L.A. Last spring, Canoo said it would build an assembly plant in Oklahoma, scheduled to open in 2023. Until then, the plan is to use VDL Nedcar in the Netherlands as a contract manufacturer. Canoo says the van will go on sale yet this year starting at $34,750.

Vancouver-based ElectraMeccanica says it marries “bold ideas with elegant design to create thrilling new ways to move people.” Its L.A. show debut, a tiny car called the Solo, is a one-seat EV that starts at just $18,500, has a 100-mile range and is aimed at both consumers and commercial customers.

Fisker’s electric Ocean crossover has a giant vertical touch screen that can rotate horizontally for movie watching and the like when the vehicle is in park. Fisker says production is scheduled to begin in a year, with prices from $37,499 to $68,999, before tax credits and shipping fees.

Another EV startup, L.A.-based INDI EV, showed an electric crossover called the INDI One, and according to the automaker’s website it will have a production version on sale in less than two years.

Mullen Technologies CEO David Michery unveiled the Mullen Five compact electric SUV at the L.A. show. Mullen calls the Five a “premium SUV,” and it will start at $55,000 when it goes on sale in 2024. The company says it has a 325-mile range. Mullen announced this year that it will open a manufacturing plant in Memphis, Tenn.

Nio unveiled its midsize ET7 electric sedan on the eve of the Guangzhou show. The 7-year-old Shanghai-based EV manufacturer says it hopes to produce 600,000 vehicles by late 2022 or early 2023 with two plants operating on two shifts in the city of Hefei. Nio said the second plant is slated to start output in the third quarter next year. The company entered the Norway market in September and is expected to offer products in Germany next year.

The 4-year-old Vietnamese company VinFast makes cars, buses and scooters. VinFast made its global debut as an EV brand at the L.A. show with the VF e35 and VF e36 crossover concepts. The company said it plans to open its first factory-owned U.S. showrooms in 2022 and begin taking pre-orders early next year.