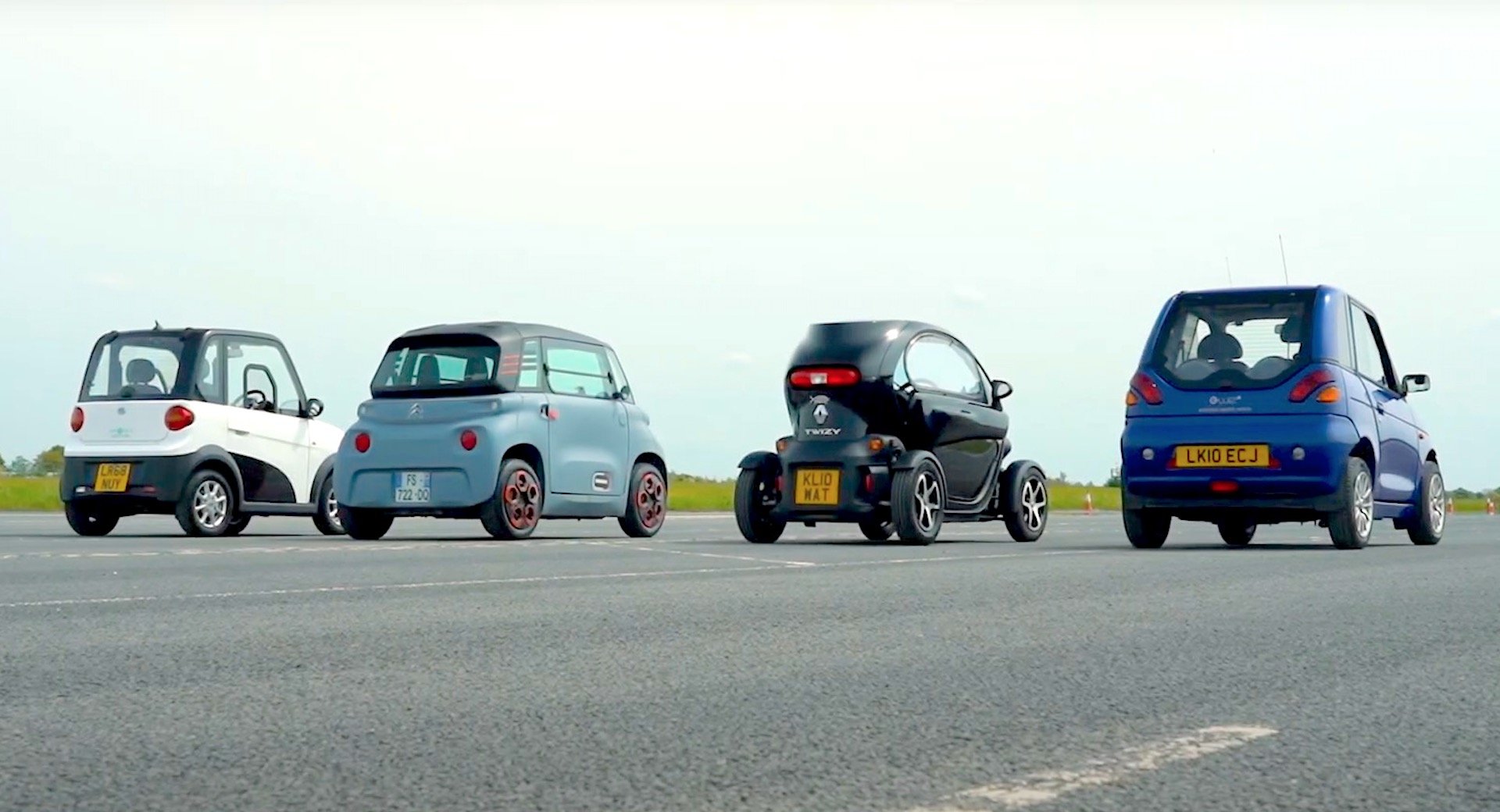 If you’ve spent any time in a European city, you might have come across some pretty strange looking shrunken city cars that make even a Chevy Spark seem as substantial as a three-row SUV.

They’re technically known as quadricycles, which means they’re exempt from certain new car regulations if they meet various power and weight criteria, and some of them can even be driven by kids as young as 14 in countries like France.

The UK’s What Car? Team put four to the test, giving each a full review, but only after comparing their woeful acceleration in what’s very nearly the slowest drag race we’ve ever seen.

You might be familiar with the tandem two-seat Renault Twizy, which has been around since 2012, and the new Citroen Ami, which, incredibly, will soon be available to rent in America. Creature comforts are few and far between (even doors are optional on the Renault Twizy), and if you think the Renault’s 17 hp sounds comical, the Citroen has just 8. But at least the lease rates are equally laughable. You can drive an Ami for just €19.99 (£17/$24) per month.

A new one on us is the Micro Electric, which, at £11,999 ($16,500) isn’t so cheap. That kind of money buys a proper car, so it’s a good job the ME has car-like equipment, including a touchscreen multimedia system, air conditioning and a panoramic roof. Its 95-mile electric range is more than double that of its nearest rival, but with just 10bhp, the performance definitely isn’t car-like.

The final contender is a used example of the Indian-built REVAi. With its highway pile-up styling and low-tech lead-acid batteries the REVAi looks like it’s from a different era, and that’s because it is. This example is from 2010 but can trace its roots back to 2001 and the original REVA (sold as the G-Wiz in the UK). What Car? Reckons it was the world’s most popular electric car right up until 2009, but only because there were almost no other EVs around.

The race is predictably amusing, and throws up a couple of curveballs, because the most powerful car doesn’t win, and the oldest doesn’t come last. Grab a bag of popcorn and get yourself comfy. But make it a big bag, this may take a while.

Stellantis adds another week of downtime at Ontario minivan plant
What Is The Jaguar F-Type Project 7 Like On A 2,000-Mile Long Road Trip?
GM to tantalize enthusiasts with today’s performance, tomorrow’s EV vision
Xpeng-backed startup plans to deliver flying cars in 2024, report says
Load A Ford Mustang Into A Truck? Yeah, Sure, What Could Go Wrong?