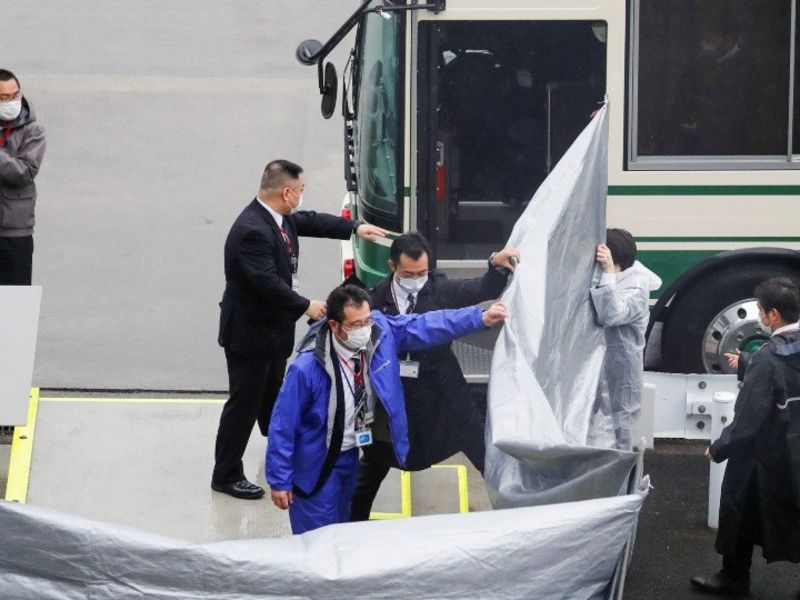 TOKYO — When the American father-son fix-it team Michael and Peter Taylor landed in Japan in 2019, they thought they were on a rescue mission to save former Nissan Chairman Carlos Ghosn from the clutches of a harsh judicial system and years of almost-certain prison lockup.

Nearly two years later, Ghosn is indeed free. But in a reversal of fortune, the Taylors are the ones on trial in Japan and staring down the prospect of hard time in a Japanese jail.

After pleading guilty in Tokyo District Court last week to aiding Ghosn’s escape, father Michael, 60, and son Peter, 28, face up to three years in prison. Their trial resumes June 29 and will turn to arguments about extenuating circumstances in a bid for lenient sentencing.

Their prosecution is one of several legal battles still raging in Japan surrounding the arrest, jailing and made-for-Hollywood escape of Ghosn. Also on trial in Tokyo is Greg Kelly, who prosecutors allege conspired to help Ghosn conceal more than $80 million in deferred compensation from the public. Also still ongoing is Nissan’s civil suit against Ghosn, which seeks $100 million in damages.

Testimony in the case against Kelly, the American former Nissan director arrested the same day as Ghosn and charged as his enabler, is scheduled to conclude in early July. Closing arguments won’t come until autumn, and a verdict could take until early 2022, more than three years after the two men were arrested in Japan during a coordinated swoop on Nov. 19, 2018.

Meanwhile, Nissan’s civil suit against Ghosn, filed in February 2020, is proceeding at a snail’s pace.

At a June 11 hearing in Yokohama, only the third public hearing so far, Ghosn’s defense lawyer, Nobuo Gohara, blasted the carmaker for delay tactics and accused it of withholding details of its full internal investigation, which underpin the allegations against the company’s former boss.

The trial of the Taylors is painting a fuller picture of Ghosn’s dramatic flight from Japan, hidden inside an oversized box that was wheeled onto a private jet and flown out of the country.

Ghosn, once one of the industry’s most influential executives, eventually landed in Lebanon, where he now lives as an international fugitive.

The Taylors were arrested in Massachusetts in May 2020 and extradited to Japan in early March after failing to block the handover in a legal fight that went all the way to the U.S. State Department.

Since their arrival in Japan, they have been locked in the same Tokyo jail that once housed Ghosn.

The Taylors barely spoke during their first public hearing, which mainly heard the prosecutors read their indictments and enter reams of evidence.

Michael Taylor, a former Green Beret and security expert, looked bedraggled compared with his buff appearance captured by security footage during Ghosn’s extraction effort. Both were led into court in handcuffs amid heavy security, presumably in reaction to their reputation as professional escape artists. The spectator gallery was ringed by 11 security guards, and eight more guards stood on the judge’s side of the rail. Each defendant was flanked on both sides by a bailiff.

Prosecutors chronicled each step of their escape operation, citing mounds of evidence compiled from surveillance cameras, bank records and witnesses such as hotel staff and airport workers.

In a statement purportedly given to prosecutors during his interrogation, Michael Taylor said he met Ghosn’s wife, Carole, through an acquaintance in Lebanon and was led to believe it was not a crime to help someone flee Japan. His son Peter allegedly told prosecutors he hadn’t been aware of Ghosn’s case but checked it on the Internet and learned that Ghosn was in a severe situation.

Planning for the operation began in June 2019 with Michael meeting Carole in Lebanon, and it involved Peter visiting Japan over that summer for meetings with Ghosn, prosecutors said. Ghosn allegedly paid a company run by Peter a total of $862,000 in two installments, and the Taylor team used some $400,000 of that amount to hire the private jet that would fly Ghosn to freedom.

Ghosn has said he had no help from family members in coordinating his escape. He also is one of many critics who oppose what they say is a system of “hostage justice” in Japan. After the hearing, a source close to Ghosn questioned the credibility of the Taylors’ statements, comparing it with the forced declarations of American prisoners captured during the Vietnam War.

“They are in Japan, in the hands of the prosecutor, about to be judged, and they are looking for clemency,” the person said. “They will say anything the prosecutor wants them to say.”

By December 2019, the Taylors recruited one of Michael’s old Army buddies to join the operation, and the three men hatched a plan that U.S. prosecutors involved in their extradition later called “one of the most brazen and well-orchestrated escape acts in recent history.”

It involved Michael and his Army friend, a man identified in court documents as George-Antoine Zayek, chartering a jet from Dubai to Kansai International Airport outside Osaka in western Japan, and entering the country under the pretense of being musicians.

They landed the morning of Dec. 29, 2019, but immediately sped halfway across the country to Tokyo on Japan’s famed bullet train. There, they rendezvoused with Ghosn at the Grand Hyatt hotel, where he was being prepped by Peter.

Michael Taylor and Zayek then raced with Ghosn on the bullet train back to Osaka, where they tucked into another hotel room near the airport. There, they packed Ghosn into one of two black oversized concert equipment cases, with air holes drilled into the bottom, and rolled the indicted former auto executive through the private jet lounge and onto the awaiting plane.

Airport personnel didn’t bother to conduct a security check. One of the ground staffers who helped load Ghosn’s box onto the plane recounted to prosecutors that the cargo was so heavy the workers joked there must be a “beautiful young lady” stowed away inside. Shortly after 11 that night, they lifted off for Istanbul, where Ghosn changed planes to Beirut.

After the escape, when Japan finally issued an arrest warrant for Michael Taylor, prosecutors said he approached Ghosn for help in covering legal costs. Ghosn, according to the prosecutor’s account, responded by having his son wire about $500,000 worth of bitcoins to Peter.

At the time, Ghosn recommended that the Taylors hole up in Lebanon, which has no extradition treaty with Japan. But they returned to the U.S., where they were finally picked up.

Naoto Okamura contributed to this report.