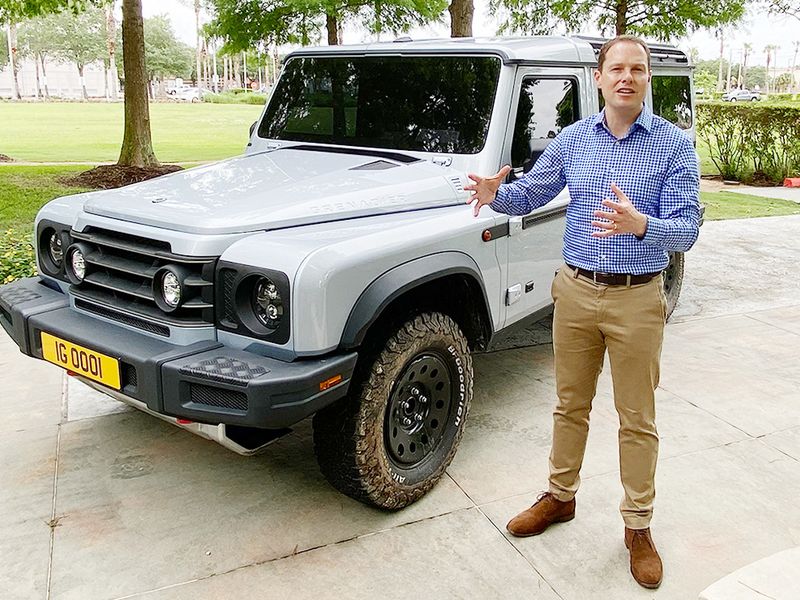 HOUSTON — Greg Clark, vice president of the Americas for Ineos Automotive, part of the British chemical company launching a rugged Land Rover Defender-like off-road vehicle in early 2023, has just one job: every job.

Clark, a former Jaguar Land Rover and Daimler marketing executive who was named to his post at Ineos in February, has on his to-do list:

Ineos Group has sites in the U.S. that handle its chemical and other businesses. Its U.S. headquarters is in the Houston suburb of League City, but the location is not suitable, Clark says, for the automotive division.

He views the placement of the automotive headquarters as critical to the division’s success. Right now, he’s scrutinizing cities on the Eastern Seaboard, which has a number of ports used by other importers, the proper transportation in place to rapidly move vehicles and parts, and good access to potential employees with automotive experience.

“We have to make the right decision,” said Clark during an event here to show an early version of the Grenadier to the media. “Being in an area where we can attract good talent and attract talent from other places of the country and that has the appropriate infrastructure is a big driver.”

The ideal location, he says, will be within reasonable driving distance of somewhere the Grenadier can be used for its intended purpose: punishing off-road driving. Clark has been looking in Atlanta and the Carolinas. The Georgia capital is home to Porsche and Mercedes-Benz as well as Triumph Motorcycles America.

The Grenadier’s silhouette and size are roughly the same as the old Defender, which ended production in 2016 after a 68-year run that saw minimal styling changes. But its design details, equipment, technology, refinement and creature comfort items are different.

The Grenadier exists because Ineos Group’s CEO, billionaire businessman Jim Ratcliffe, was unsuccessful in buying the discontinued Defender from Jaguar Land Rover. After being rebuffed, Ratcliffe decided to build a vehicle that would be Defender-like in its capability but would be a comfortable and modern super-rugged off-roader that would meet global safety and emissions standards.

Clark is not too concerned that the Grenadier will be viewed as a Defender knockoff. “If you think of body-on-ladder-frame vehicles that are built to be very rugged and very capable, they are going to follow a very similar blueprint,” he said.

While the Grenadier looks the part of a safari vehicle, the real challenge will be delivering world-class reliability under extreme conditions. That’s a tough challenge for all automakers, and even tougher for a company new to the industry building a new vehicle in a plant it just bought.

Unlike with the current spate of EV startups, money has never been a concern for the Grenadier project. Ratcliffe’s team simply writes checks for whatever is needed. For instance, Ineos hired Canadian supplier Magna to do much of the engineering in Austria. The Grenadier powertrain is a BMW 3.0-liter inline six-cylinder coupled to a two-speed transfer case and ZF 8HP eight-speed automatic transmission — proven components already in high-volume production.

“It’s important to be humble about this,” Clark said, “We are not going to do this independently and completely on our own. You actually need to go and talk to the experts who know how to build 4×4 off-road military vehicles very effectively.”

Production is slated to start in Hambach about a year from now. Europe is set to get the first vehicles, followed in early 2023 by the U.S., Canada and Mexico, says Clark.

The goal, he says, is to have between 30 and 50 dealers open at launch who will provide about 70 percent market coverage. When North America is fully operational, Ineos plans to sell around 30,000 vehicles per year, possibly more.

Ineos aims to launch the Grenadier with a price that puts it above the most expensive Jeep Wranglers and Ford Broncos but far lower than the Mercedes-Benz G-Class, which starts at around $130,000. A price range of $75,000 to $120,000 would put it in direct competition with many versions of the new Defender.

The company plans to stress that potential customers have already been using its products.

Said Clark: “Ineos has actually been a part of your life for longer than you’ve known it. From the tennis shoes you are wearing, to the cellphone in your pocket, to the car you drove from the airport, there are Ineos components and ingredients in more of the elements and facets of your life than you can imagine.”

Another goal is simplicity. There will be just one powertrain, no diesels and no manual transmissions.

But there will be a plethora of accessories customers can buy and have installed at the dealership. Ineos is planning to offer such things as shovels, gas cans, winches, LED lighting, appliances, power tools, grab rails, bike carriers and roof racks.

Somewhere down the road, there could be a pickup version and one that uses hydrogen to power an electric motor. But getting the first model to dealers on time and poised for a fast start is what is driving Clark now.

Said Clark: “This has to be easy to sell. I want to be able to give our retail partners the maximum possible opportunity to have the right car available at the right price at the right time for the right customer.”

EV startup Electric Last Mile clears hurdle toward SPAC merger
The New Suzuki Jimny Is The Affordable Off-Roader We Want But Can’t Get
$154,000 For A Prius? Here’s Why Cars Are Ridiculously Expensive In Singapore
No Yoke, the Refreshed Tesla Model S Ditches the Round Steering Wheel Entirely
Someone Has Wrecked A Rare Ferrari 599 60F1 Alonso Edition