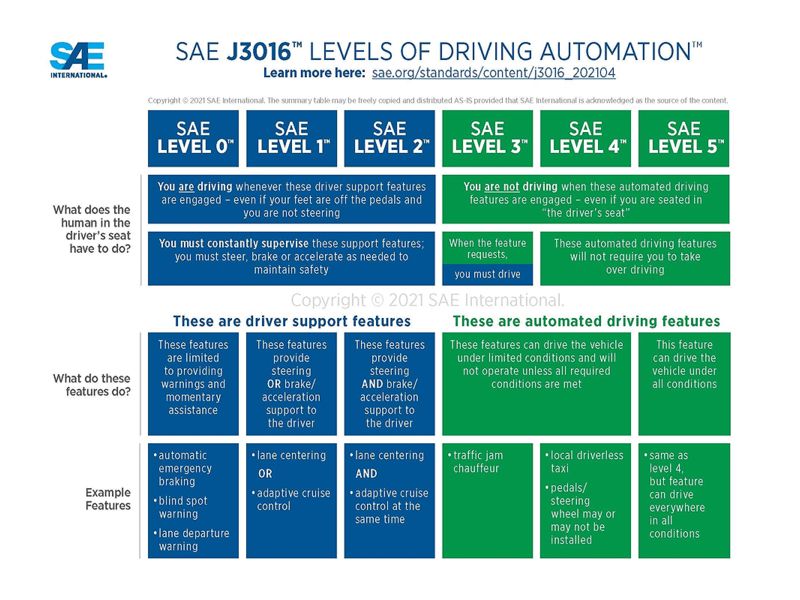 The levels of driving automation, the industry’s go-to framework, were updated this week to clarify differences between Level 3 and Level 4, part of an effort to better define and group the capabilities of autonomous technologies that are on the road and under development.

The six levels, established by SAE International in 2014, describe the capabilities of driver-assistance and autonomous driving systems. The levels range from 0 — no driving automation — to 5 — full automation.

SAE and the International Organization for Standardization have clarified Levels 3 and 4 under the J3016 automation standards.

The update also provides an explanation for “how classifications of sustained driving automation fit into the broader context of driver assistance and active safety features,” according to SAE.

The framework names Level 0, 1 and 2 systems as “driver support systems,” while Levels 3 through 5 are considered “automated driving systems.”

The driver support features require a driver to constantly be in supervision and steer, brake or accelerate as needed.

On the other hand, Levels 3 and 4 automated driving systems can drive the vehicle under limited conditions and will not operate unless all required conditions are met.

Level 5 automated driving systems can drive the vehicle under all conditions.

SAE specifies for Level 3 that when the feature requests, a human must drive. For Levels 4 and 5, automated driving features will not require a human to take over.

“As the development of automated driving technologies continues on a global scale, [the levels of automation have] evolved to align with the developing technologies and deployment strategies,” Barbara Wendling, chairperson of the SAE J3016 Technical Standards Committee, said in a statement.

The changes come amid incidents of driver misconceptions about what the varying levels of automation mean in vehicles currently on the road.

Tesla’s Autopilot has been erroneously considered fully self-driving by operators, resulting in a dangerous misunderstanding of what its vehicles are actually capable of.

Meanwhile, Google affiliate and self-driving technology company Waymo has pledged not to use the phrase “self-driving.”

Many drivers conflate driver-assist systems — which require the attention of a human driver and the ability for the human to take control of the driving task — with self-driving. No vehicle available for purchase today is fully autonomous.