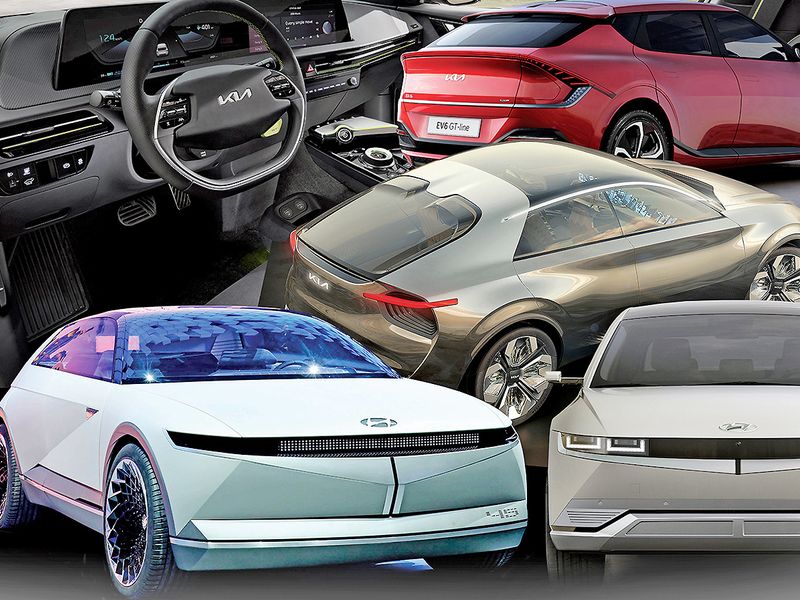 LOS ANGELES — When Hyundai unveiled its angular “45” concept vehicle at the Frankfurt auto show in fall 2019, its mix of futuristic styling cues and 1970s nostalgia struck observers as a daring design exercise rather than an upcoming production model.

But 18 months later, the Ioniq 5 compact crossover is headed into production with much of that concept look intact. U.S. sales start this fall.

The story is similar with Kia’s EV6, which also sits on Hyundai Motor Group’s first dedicated electric platform. While toned down from Kia’s 2019 Imagine concept car, the EV6 that’s headed to market with a distinctive rear hatch and wraparound taillight bar is certainly not playing it safe.

This is the South Korean group’s strategy for gaining a place in the industry’s new EV race.

With industry plans for 100 or more competing EVs in just the next few years, the Hyundai group aims to set itself apart by using design — along with advanced charging technology — to project its global EV ambitions. The group may have arrived late in an industry built on gasoline engines, but it intends to get a jump on rivals in the transition to electric vehicles.

“They are really putting a stake in the ground that says, ‘We as a company are going to show leadership in building these products,’ ” said Kevin Reilly, chairman of the Hyundai National Dealer Council and owner of Alexandria Hyundai in Virginia.

“They are building a whole subbrand and a platform for the Ioniq 5, Ioniq 6, Ioniq 7,” Reilly said. Dealer training and facility plans are being rolled out for the Ioniq subbrand this spring.

Making a splashy arrival before there are too many EV competitors in the compact-crossover segment could be an advantage for Hyundai and its corporate siblings, including Genesis, analysts said.

Tesla’s Model Y crossover follows the familiar look of the popular Model 3, while Ford’s Mustang Mach-E is turning heads by leaning into its sporty heritage. In terms of price and range, the Y and Mach-E are lining up as premium rivals.

In contrast, Volkswagen’s ID4 is more evolutionary in design, since VW is aiming for a mainstream crowd at a price comparable to gasoline-engine counterparts — once tax credits and running costs are calculated. Nissan’s coming electric Ariya, likewise, has an appealing crossover shape that’s still forward-looking.

Hyundai and Kia haven’t announced pricing or trims for their new EVs, but they are likely to offer a spread of prices based on their medium-term EV volume goals as a whole. The Korean brands have been taking styling risks that have paid off on recent vehicles, such as the Hyundai Kona and Kia Telluride crossovers.

Whether bold styling translates to EVs, with something as distinctive as the Ioniq 5, is an open question.

“I think it’s cool, retro, futuristic,” Reilly told Automotive News last week. “Having something that really makes a statement will be appealing. In terms of EV adoption, you kind of want people to know you’re driving an EV. I think most people will like it. Some people won’t. That’s the nature of styling.”

One of the Ioniq 5’s design tricks is pushing the wheels out to the corners of the vehicle to create expansive interior space without the traditional rear overhang of gasoline crossovers. As a result of the design, potential EV shoppers will find a flexible interior inside.

The Ioniq 5’s rear seat has a wide range of fore-and-aft motion to adjust to people or cargo, and there’s a front center console that moves several inches to the rear. That opens up the front for loungelike space while waiting at public chargers.

“You’re really going to see a wider audience out there,” Reilly said, comparing the coming models to Hyundai’s current Kona and Ioniq sedan EVs. Those products are based on subcompact platforms designed for gasoline powertrains.

“I can actually take my kids to soccer practice in the Ioniq 5. I can move the seats and haul stuff. I’ve reduced the compromises of driving an electric vehicle,” said Reilly, whose daughter drives a Kona EV.

The dedicated new skateboard EV platform that the automaker is using, called E-GMP, also promises to reduce range anxiety. In addition to extended-range batteries, the platform uses 800-volt technology for faster charging, compared with traditional 400-volt systems. High-end EVs from Porsche and Audi also use 800-volt systems. The Korean manufacturers are turning up the ante on mass-market EVs.

“At first blush, the Ioniq 5 and Kia EV6 look to be very compelling,” said Tom Moloughney, who tests plug-in vehicles at InsideEVs. “I have the Ioniq 5 on my radar for my next personal EV. The charging rate is great, but most people new to EVs won’t really understand charging enough to realize what that means as compared to other EVs.”

Hyundai says the Ioniq 5 can charge from 10 percent to 80 percent in 18 minutes. That’s based on a 300-mile range battery using the WLTP range standard, which generally calculates a higher mileage score than EPA testing.

The Ioniq 5 also can add 60 miles of range in five minutes using 350-kilowatt direct-current chargers being rolled out by networks such as EVgo and Electrify America. Actual charging speeds depend on many factors, although the Hyundai and Kia EVs will have an advantage over mainstream rivals on paper.

“The Ioniq 5 and EV6 will make road-tripping much more enjoyable for their owners, provided they can find a high-powered DC fast charger along the route,” Moloughney said. “These stations are proliferating, and in a few years, most of the major highways and interstates will have coverage to enable long journeys.”

Hyundai group’s early efforts in EVs have gone well — with the recent exception of a messy battery recall in conjunction with supplier LG Chem.

“Hyundai and Kia are already doing impressive things with battery-electric vehicles, but what continues to be their biggest challenge is awareness,” said Karl Brauer, executive publisher at CarExpert.com. “Now they have the Ioniq 5 and Kia EV6 coming out, and the specs of those look to be as good or better than the bulk of EVs out there.”

The styling of the Korean EVs can also help build that awareness over better-known brands moving into electric vehicles. The trick is to catch the eyes of consumers without being too over the top, Brauer said.

The Ioniq 5 and Kia EV6 “don’t look like conventional cars, but they don’t look like weird cars in my mind,” Brauer said. “They look like cool, arguably stylish cars. You might suspect something is going on when you look at them in terms of their shape, but it doesn’t hit you over the head.”

Stephanie Brinley, principal automotive analyst at IHS Markit, said EVs will be coming to market faster than consumers can keep up with, and that will make it a challenge for automakers to stand out.

Consumers already have more than 340 models to choose from, and Brinley estimates that another 100 BEVs will arrive in the next two years.

“Just looking at the five or six coming right now, there’s a lot more choice, and it’s going to be hard to cut through the clutter,” she said. The coming Ioniq 5 and EV6 “are both pretty fresh and dynamic looking.”

It may take a while for before consumers grasp the intricacies of fast-charging and the other quirks of EV ownership. It might also take a while for automakers to assess what their future in the electric transformation is going to look like, even with an early hit or a major flop out of the coming crop of EVs.

“It doesn’t matter who sells the most EVs in the next two years. It’s not about winners and losers in the near term,” Brinley said. “This is about a fundamental structural shift that the automakers are trying to do, and we’re barely at the beginning.”