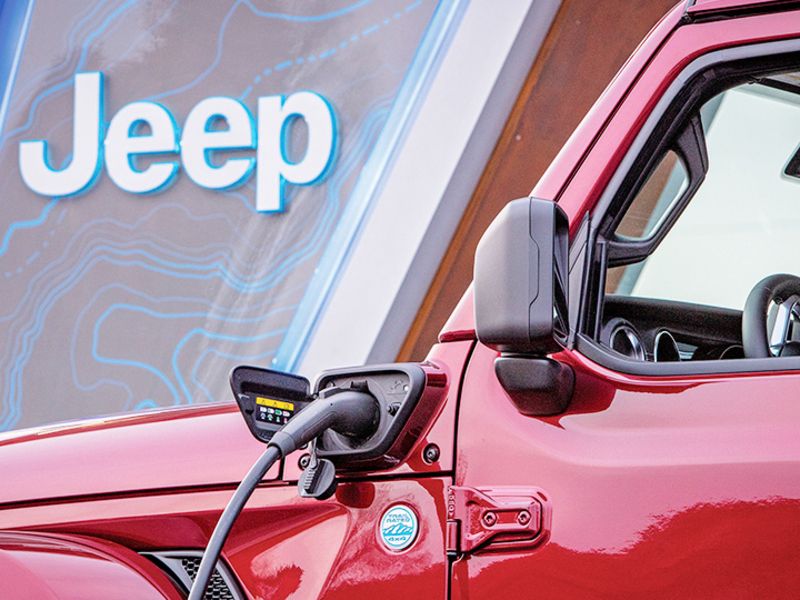 DETROIT — Jeep Wrangler enthusiasts who take their trail cruisers off-road are no strangers to tree-lined forests that provide a natural cover overhead.

Now Jeep, which is jumping into electrification with the Wrangler 4xe plug-in hybrid and other models down the line, is building a different kind of canopy that will send juice to its green vehicles before excursions in the wilderness.

The outdoorsy brand has partnered with Electrify America to create a network of Jeep-branded charging stations that will be situated at or near trailheads across the country. The charging stations will be by trails with Jeep Badge of Honor status, which allows owners to earn trinkets to put on their vehicles after conquering them.

Jeep is bringing its free- spirited mentality to the EV world and ushering in an era of environmentally friendly off-road adventures that could reshape public perception of electrified models, their capabilities and the brand itself.

Jeep North America head Jim Morrison hopes the charging stations will send a message that the brand — which has been known for rugged utility rather than fuel efficiency — is progressive, green and laden with technology. All Jeep nameplates are slated to offer some form of electrification by 2022.

Having charging stations at trailheads will be a novel sight. The first Jeep units will appear in Moab, Utah; Big Bear, Calif., and at the Rubicon Trail in Pollock Pines, Calif. — all popular spots for the Jeep community. Morrison said the plan is to install 35 chargers.

“We’ve never seen one in all my travels,” Morrison told Automotive News. “It’s kind of a natural extension for us with the Wrangler 4xe. It’s launching now and we’re talking to our customers and trying to really illustrate to the world our commitment [for] Jeep to be the greenest SUV brand.”

The Level 2 charging stations, which will be either directly connected to the power grid or use solar power to generate electricity, are eye-catching structures that drew attention in Moab during the Jeep Easter Safari, an off-road event at which the brand rolls out wild concepts and sometimes tests new technologies. Jeep debuted the Wrangler Magneto concept this year, a manual-transmission, fully electric vehicle loaded with four battery packs.

Sam Fiorani, vice president of global vehicle forecasting for AutoForecast Solutions, said Jeep had to invest in a charging network if it wanted to sell electrified models, especially Wranglers.

“It also ties in with the image you want to bring that you’re going off-road to appreciate nature, and it’s nice to do it without polluting nature,” Fiorani said.

The automaker said Wrangler 4xe owners will get free charging via a custom mobile app by Electrify America, which will also allow drivers to initiate and monitor their charging session. Only Jeep customers will be able to use the chargers.

Morrison said the charging units almost resemble trees. Even without the Jeep logo on the side, Morrison thinks passersby would recognize that they are affiliated with the brand. The units feature a topographical map design on the side.

The chargers’ solar panels follow the sun, moving every few minutes to get the best position.

“When you park a [Wrangler] 4xe under the solar panel, it’s really a dramatic presence,” Morrison said. “It sends a pretty clear message to the world that we’re serious about electrification for Jeep.”