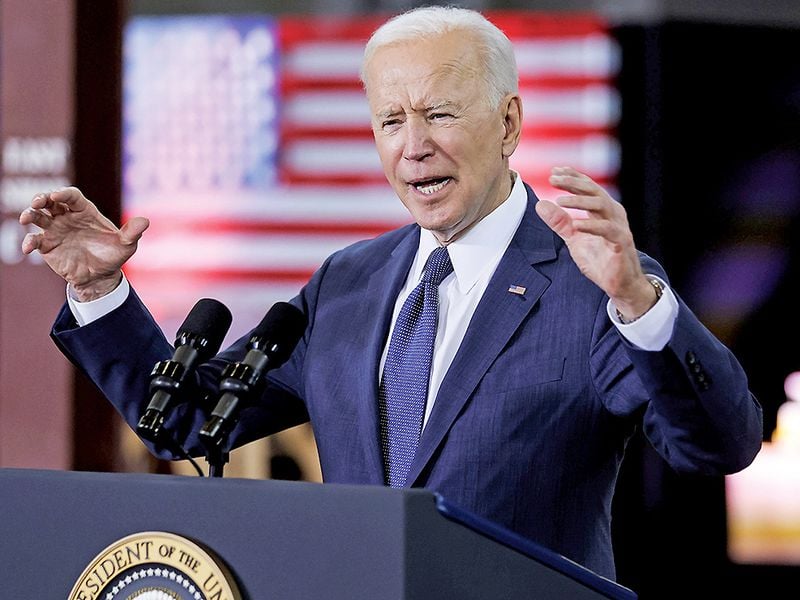 President Joe Biden’s sprawling infrastructure proposal unveiled last week echoes many of the goals outlined by the auto industry through its persistent attempts to influence the administration’s strategy on expanding clean energy, speeding the adoption of electric vehicles and competing with China.

In a six-page letter dated Monday, March 29 — two days before Biden introduced his American Jobs Plan — groups representing automakers, suppliers and union workers urged the president to consider a “comprehensive approach” as the industry and government work toward a net-zero carbon transportation future that relies heavily on a shift to EVs.

In the letter, the Alliance for Automotive Innovation, the Motor & Equipment Manufacturers Association and the UAW outlined efforts that incentivize EV adoption, build out charging and refueling infrastructure, expand consumer awareness and spur investments by automakers and suppliers in the U.S.

Those requests are now key tenets in Biden’s roughly $2 trillion plan, which goes beyond fixing roads and bridges and invests billions of dollars toward vehicle electrification and other initiatives to strengthen the U.S. economy and address climate change.

“This may be the most consequential piece of legislation that this industry has seen in a decade,” Ann Wilson, MEMA’s senior vice president of government affairs, told Automotive News. “It is obviously setting a very aggressive agenda for the industry, which is an industry that is already globally in transition.”

While the lengthy letter was a “very formal way” of beginning those conversations, Wilson said, the infrastructure plan is an opportunity for the industry to put its fingerprints on transformative legislation and make sure “the issues addressed are ones that are key to the continued competitiveness and growth” of the auto sector.

Automakers and suppliers plan to invest $250 billion in electrification by 2023, but only 1.5 million of the 278 million passenger vehicles currently registered in the U.S. are EVs, according to the groups’ letter. EVs also made up only about 2 percent of new-vehicle sales in the U.S. last year.

“Yes, automakers will continue to invest, continue to partner, continue to develop new approaches to deploy enormous amounts of capital, but more than that will be required to put in place the necessary conditions for success.”

The alliance represents most major automakers in the U.S., including General Motors and Volvo, which have set targets for EV-only lineups by 2035 and 2030, respectively.

Kristin Dziczek, senior vice president of research at the Center for Automotive Research in Ann Arbor, Mich., said there’s “a lot of pressure” to transition quickly to EVs, and Biden’s proposal aims to accelerate the shift.

“It puts many of the pieces in place to get there,” she said.

“I don’t know if we get all the way there, but I think there are some big challenges ahead — not just on getting the bill passed. … Getting consumers on board and getting this infrastructure built out is going to take quite a bit of time.”

A hasty transition also could leave smaller companies and certain regions — especially those that are part of the supply chain for internal combustion engine vehicles — more vulnerable, Dziczek said.
To lessen the impact, MEMA’s Wilson said “we need to make sure that we leave as few people behind as possible,” including suppliers manufacturing components and technologies that may not be needed in EVs.

“We need to retool those factories. We need to train those workers,” Wilson added. “We need to make sure that this is a future for all of those people.”

The White House said the plan — which includes investments in R&D and incentives for the domestic production of semiconductors, batteries and other advanced technologies — will create “millions of jobs.”

To pay for the plan, Biden has proposed raising the corporate tax rate to 28 percent from 21 percent and enacting a 15 percent minimum tax on the income large corporations report to investors as well as other steps to reform the corporate tax code.

With a narrow Democratic majority, the plan won’t have an easy path in Congress. Biden is seeking bipartisan support, but Republicans, including Senate Minority Leader Mitch McConnell, are opposed to the tax changes and other aspects of the proposal.

It “is not going to get support on our side,” he said last week. Meanwhile, some Democrats don’t think it goes far enough. Rep. Pramila Jayapal of Washington said the nation needs a “bolder” strategy.
House Speaker Nancy Pelosi has set a July 4 deadline for passage, which could allow the Senate to finish its work in early August before the congressional recess.
Biden’s proposal comes at a critical time for the U.S. to regain its leadership footing and aims to “check all of the boxes” for reclaiming a dominant position in the EV market as it competes with China and Europe, according to Nick Nigro, founder of EV research group Atlas Public Policy.

“The federal government role is potentially sizeable, and the more we can signal to the market and to the world that the U.S. is a welcome place for those private investments, the more of them will show up here,” said Nigro, who has tracked more than $400 billion of EV-related announcements by the private sector since 2016.

“To that end,” he said, “this is a very good time for Washington to send a signal to the industry that your dollars are welcome here.”

Bloomberg contributed to this report.