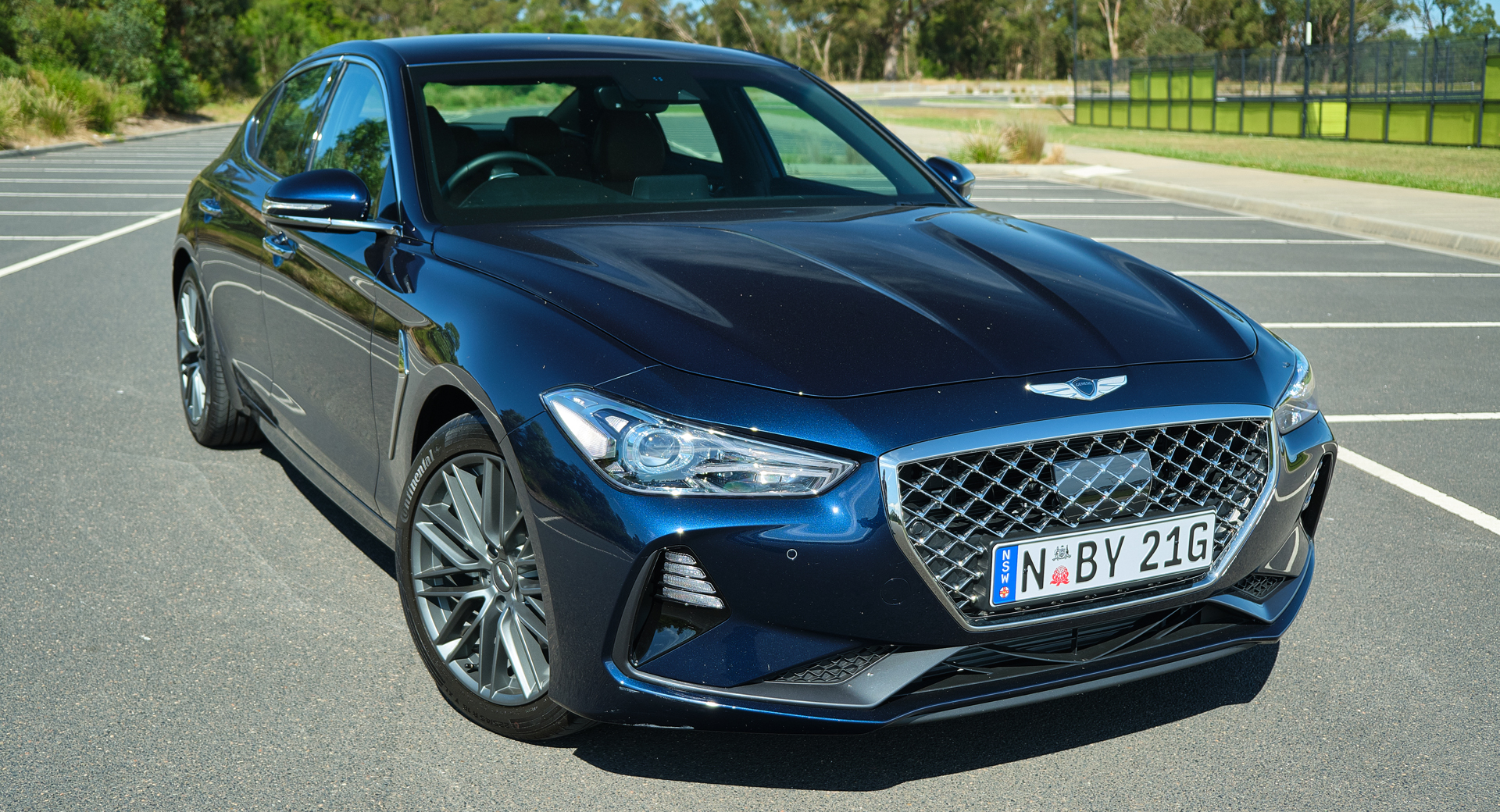 Genesis is embarking on an ambitious new strategy with a refreshed design language and is eager to establish itself as a legitimate rival to not only Lexus but also the German trio of Mercedes-Benz, BMW, and Audi.

In recent years, Genesis has built some pretty impressive vehicles and of them, the G70 has been the highlight. Recently facelifted for the 2021 model year with a new grille and redesigned head- and taillights and bumpers, the G70 is a superb sports sedan and blew us away in our first review of the pre-facelift model in mid-2020. That model had the flagship 3.3-liter twin-turbo V6, but we were intrigued to see what the G70 would be like with the entry-level 2.0-liter turbo. And, here we are… 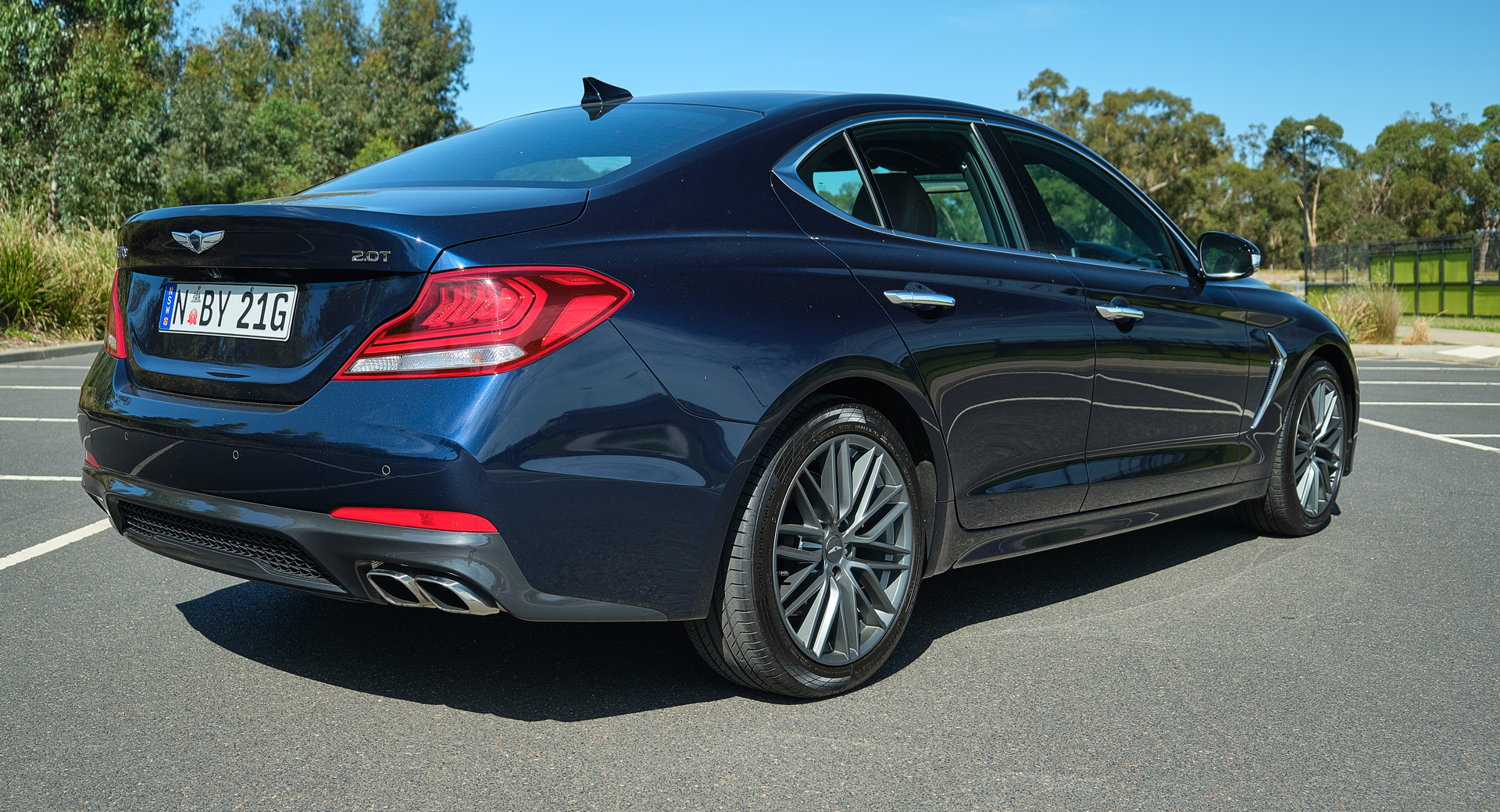 Viewed from the outside, you would be hard-pressed to notice the difference between this base 2.0T model and the mid-range 3.3T Sport. Look a little closer, however, and some things do stand out.

Rather than sporting a black chrome grille like the 2.0T Sport and 3.3T Sport, the standard G70 2.0T has a chrome grille and grille surround, providing it with a slightly softer look. Similarly, the dark chrome accents around the windows of the Sport have been replaced by a more traditional chrome finish. Our test car also came with a set of distinctive multi-spoke wheels that we actually prefer to the five-spoke rims of other variants.

The most obvious visual point of difference between the 2.0T and the 3.3T is found at the rear where the dual, oval-shaped tailpipes on either side have been replaced by a simpler dual-tailpipe design at the lower right corner. The diffuser of the 2.0T is also more subtle and our test car was finished in Adriatic Blue, a shade only offered on this base model.

From the moment the G70 was launched, it was obvious that the cabin was far more luxurious and premium than that of the Kia Stinger, its more humble “cousin”. Our test car came outfitted with Walnut Brown leather across the seats, center console, and inner door panels. Higher-end variants of the G70 have quilted leather but the cabin of our test was more than adequate. 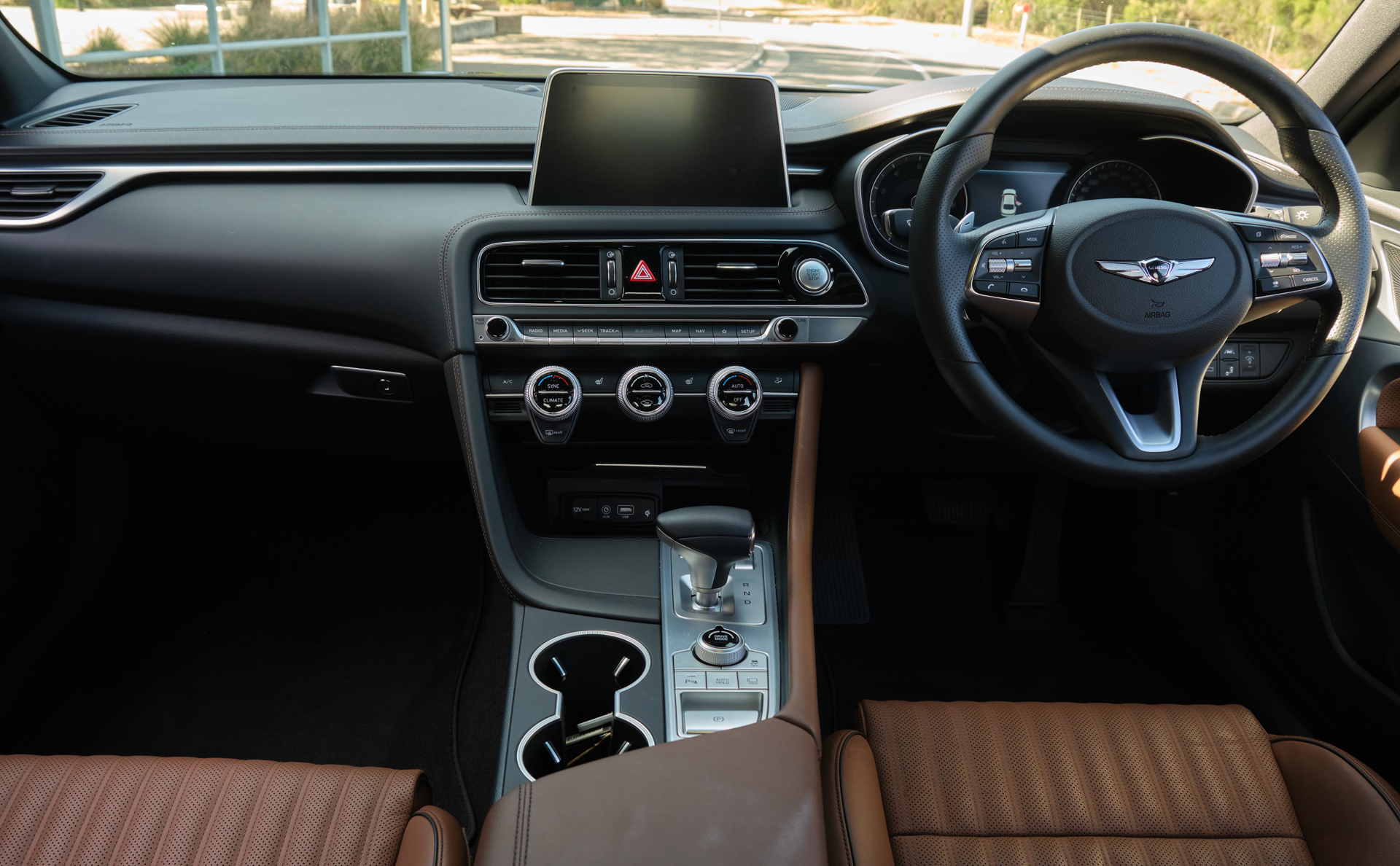 Genesis hasn’t made many alterations to the interior of the facelifted model, but the most obvious improvement is the fitment of a larger 10.25-inch touchscreen infotainment system that has a unique Genesis UI and includes Apple CarPlay and Android Auto. By comparison, the infotainment screen of pre-facelift models like the one that we tested is feeling its age and has the same outdated UI as entry-level Hyundai hatchbacks.

One thing about the interior stands out above all others and that is the driving position. It is perfect, especially for taller drivers. The electronically-adjusted seats may not offer quite as much side bolstering as I would like but they can be positioned extremely low, so much so that it feels like your butt is sitting on the floor. 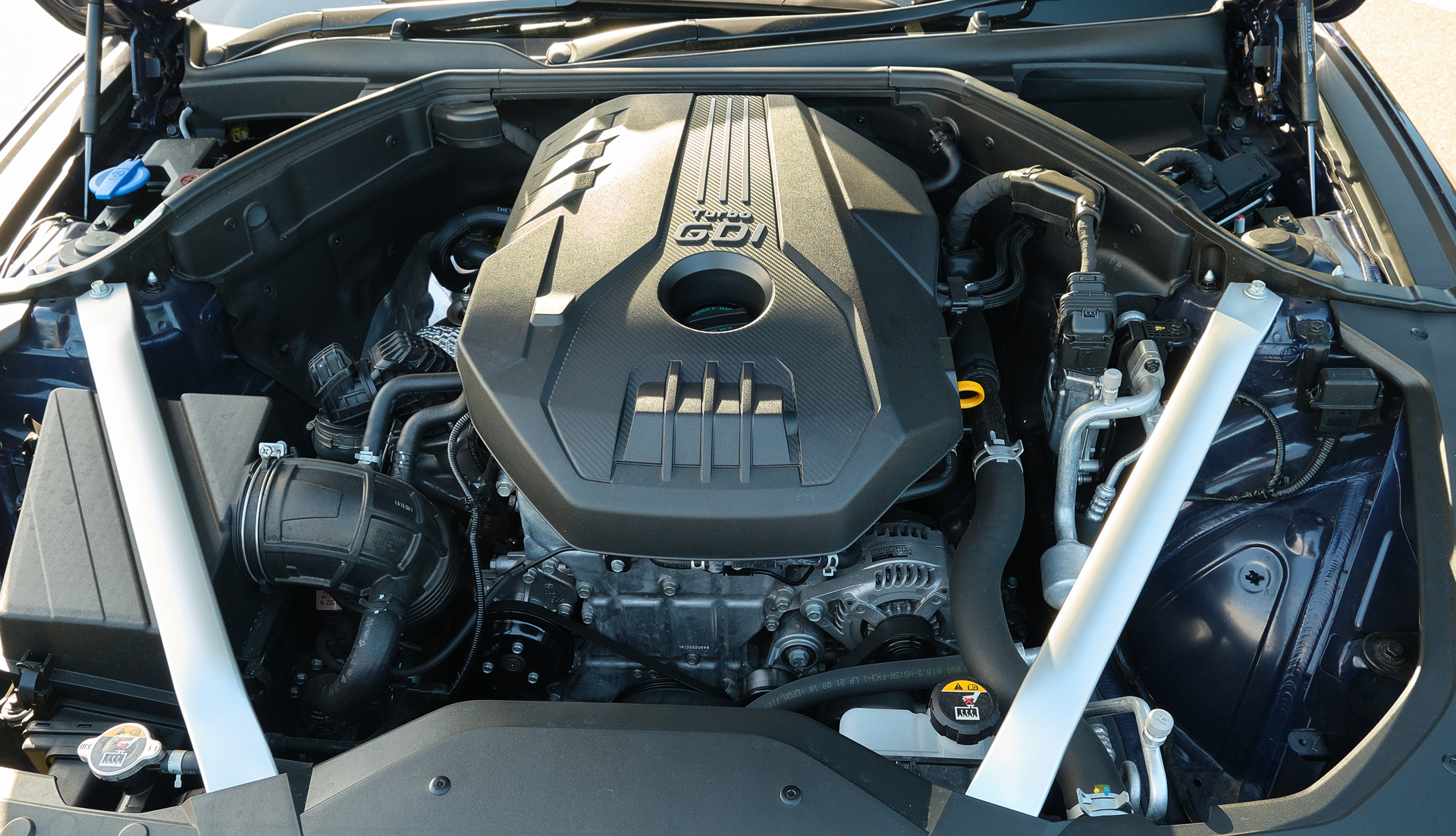 One could be excused for thinking that you would be left yearning for the 3.3-liter engine when driving around in the G70 2.0T but we didn’t find that to be the case. Sure, it isn’t as quick but for everyday driving duties, it feels more than adequate. 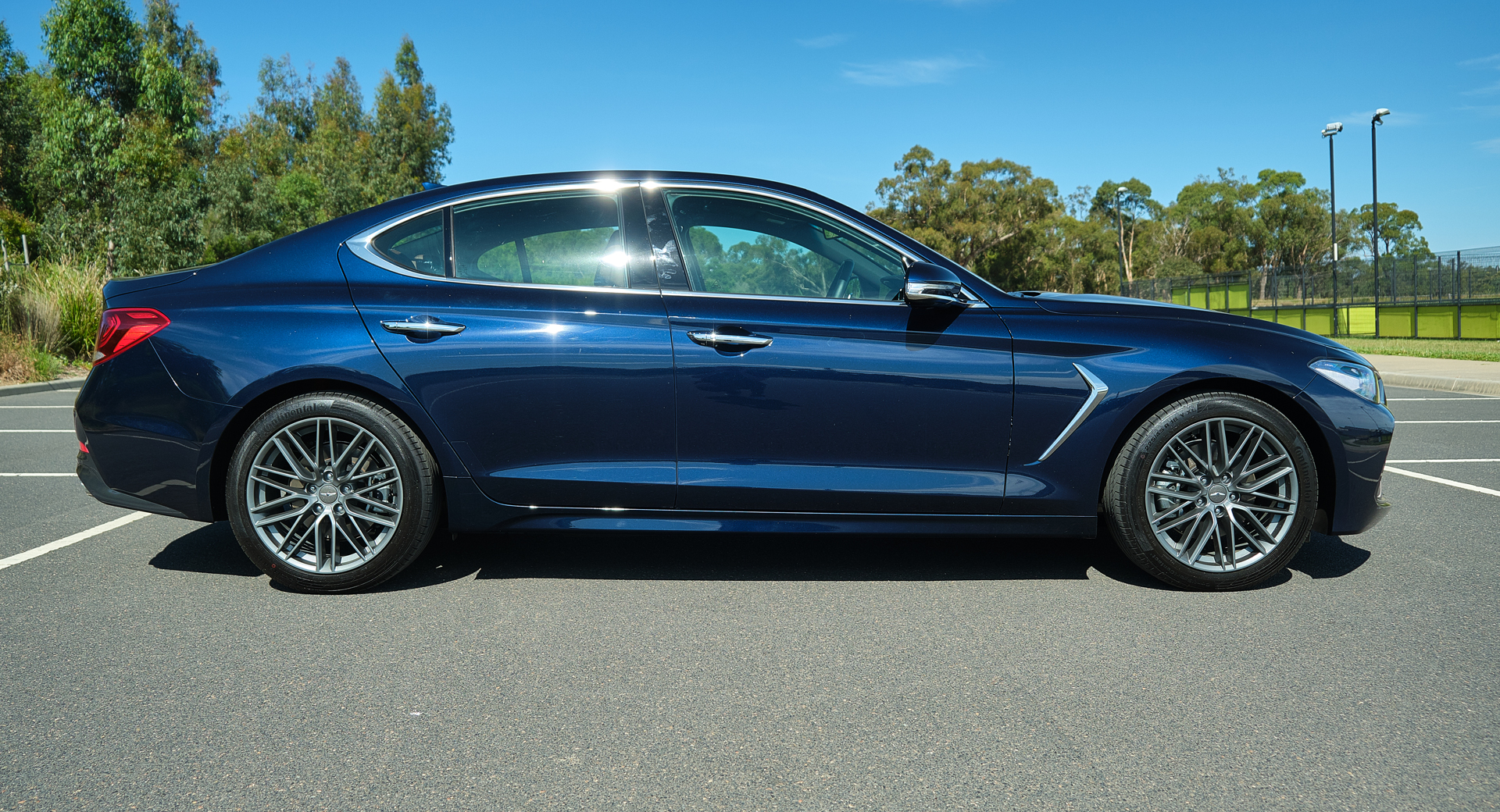 In a straight line, the G70 2.0T isn’t overly enthusiastic and takes 5.9 seconds to hit 100 km/h (62 mph) with launch control enabled. With that being said, it feels great on the move and the engine is nice and quiet, as long as you turn off the ‘Active Sound Design’ system that pumps induction sound into the cabin. The eight-speed automatic is decent, although we do prefer the eight-speed dual-clutch that Hyundai, Kia, and Genesis have started to roll out throughout their respective ranges.

Like its bigger brother, the base G70 handles beautifully. Steering is ace and provides you with all the feedback you could ever need to understand what the front tires are doing. These tires, by the way, are Continental Contisportcontact 5s and are not as performance-focused as the Michelin Pilot Sport 4s in other variants. Nevertheless, they provide respectable amounts of grip and perhaps due to the reduced weight of the four-cylinder, the front end of this model seems even more direct. 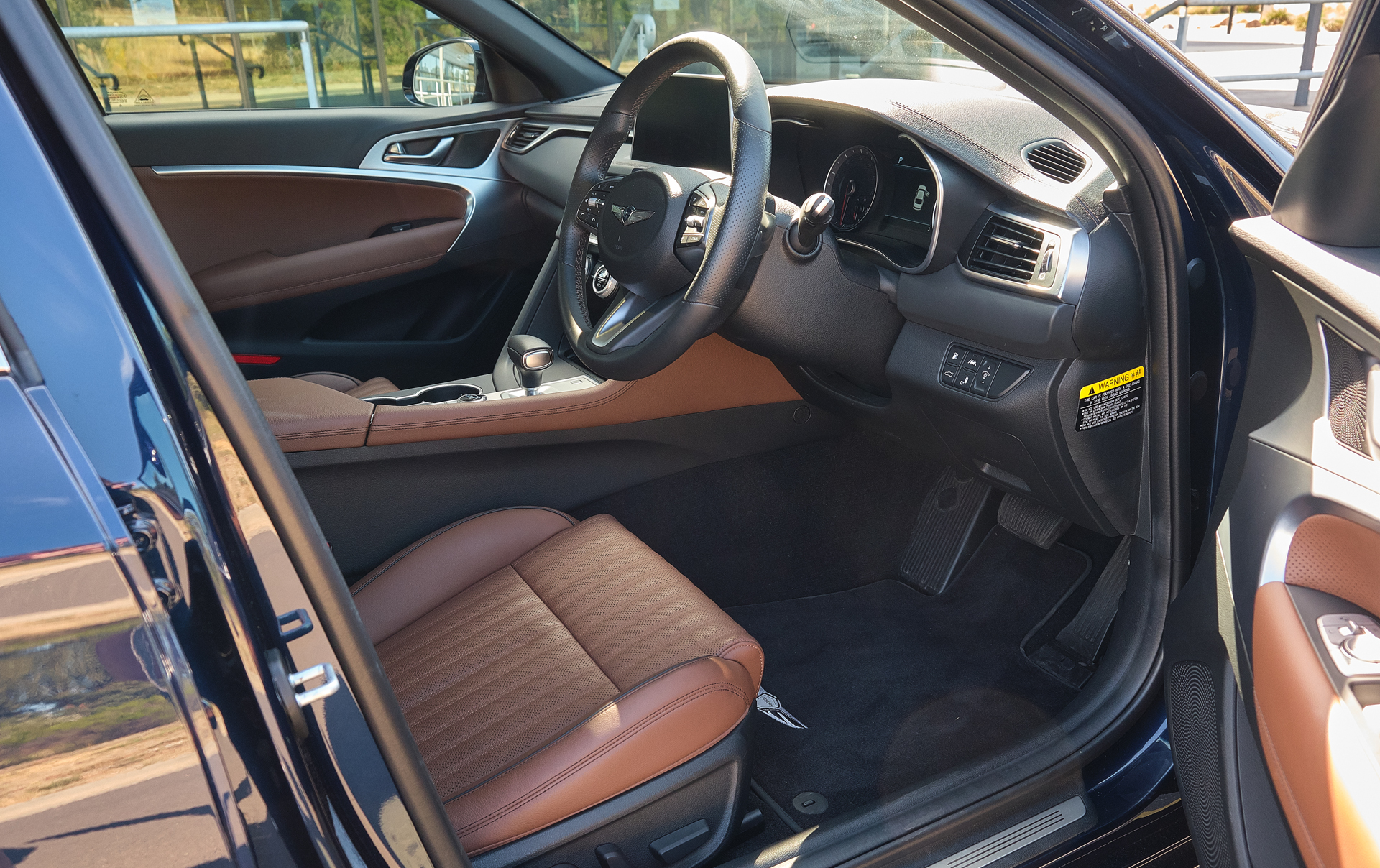 The G70 3.3T Sport initially surprised us with how tail-happy it could get, but the 2.0T isn’t so prone to swinging its tail out around every corner. Even so, you can still feel the rear end begin to gently rotate during sustained cornering and like its more powerful sibling, the 2.0T’s chassis is responsive to the finest of inputs and never feels out of sorts.

Genesis Australia is currently looking to off-load the final G70 models in its inventory before the facelifted variant arrives. Priced at AU$65,800 (US$44,691), the entry-level 2.0T model isn’t cheap, but if you go for it, we don’t think you will feel shortchanged for choosing it over the 3.3T.