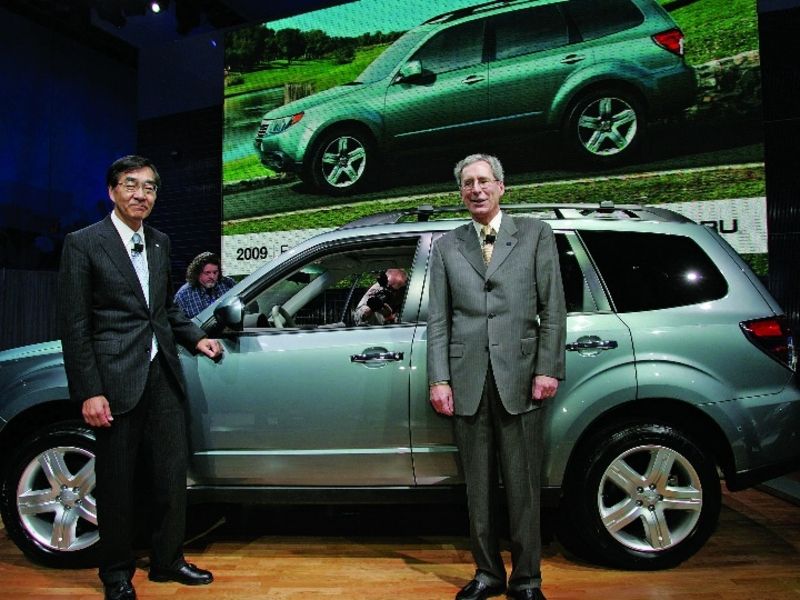 Editor’s note: This story is part of a package in the March 8 issue looking back at the March 2011 earthquake and tsunami in Japan.

Nearly 10 years ago, Tom Doll and two Subaru of America executives boarded a plane in Newark, N.J., and flew to Tokyo for Fuji Heavy Industries’ annual board of directors meeting.

It would have been a routine business trip if not for the date: Sunday, March 13, 2011.

Two days prior, Japan had been rocked by a 9.0-magnitude earthquake and a tsunami. Despite the obvious destruction that the natural disaster caused, it still wasn’t entirely clear what the full extent of the impact would be.

“I get a call first thing Saturday morning from Sam Komine, and he says that by the time you guys get here on Monday everything should be back to normal,” Doll, who was COO at the time and now is CEO, told Automotive News via video last month from Subaru’s U.S. headquarters in Camden, N.J.

Doll had his doubts, which he voiced to the colleagues with whom he was scheduled to travel: Tim Mahoney, the brand’s chief marketing officer, and Tim Colbeck, senior vice president of sales.

“Before we got on the plane, I said to Colbeck and Mahoney, ‘Are you guys sure you want to go?’ ” Doll recalled, pointing out that there was also a nuclear reactor in Fukushima that had been damaged and was leaking radiation.

But as their plane descended into Narita International Airport, it became clear that things were not OK.

“The flight attendant comes on and says, ‘Oh by the way, when we get there, please do not be alarmed, but power into the airport is very little. The moving sidewalks are not working and you’ll notice that the lights are just dim.’ We get there and it was a lot worse than we thought,” Doll said. “Not only were the moving sidewalks not working, but it was actually dark because we arrived in a rainstorm.”

Buses from the airport to downtown Tokyo couldn’t run normal routes. Instead of going across Tokyo Bay, the detour had buses going around it, Doll said, causing delays and massive lines.

Eventually, a car was sent to pick up the executives. It was the first and only time Doll had a private ride from the airport to his hotel, he quipped.

The three executives arrived at their hotel, unpacked and were greeted with aftershocks.

“We had a few drinks to settle ourselves down because the whole time the place is shaking like you wouldn’t believe,” Doll said. “I’ve been over to Japan a lot, and I’ve experienced a lot of earthquakes over there and tremors, but I never experienced anything like this.”

The sound of hangers in closets smacking together and safety announcements filled their rooms while they tried to sleep.

“At three o’clock in the morning, after a massive tremor struck, I called Colbeck up and told him, ‘I don’t know about you guys, but I’m out of here. I don’t think I can take this for three or four days. I’m going to investigate coming back right away,’ ” Doll recalled. “Tim said, ‘Count me in,’ and Mahoney said the same thing.”

Finding a taxi willing to take the executives back out to the airport on Tuesday morning was difficult. They eventually found one, but it cost them around $1,000, Doll recalled.

The three execs made their way through the chaotic airport and boarded an afternoon flight to New York’s John F. Kennedy International Airport. The only problem? Their cars were still in Newark.

“All we cared about was getting back in the country,” Doll said. “We didn’t care if we we’re going to San Francisco, Chicago or New York.”

They attended the Wednesday board meeting via video. At one point, Ikuo Mori, then CEO of Fuji, addressed Doll.

Doll, who joined Subaru in 1982, has seen no shortage of crises and challenging moments as the brand has morphed from a struggling niche automaker into a serious player in the U.S. automotive industry.

But the challenge facing Subaru of America, then based in Cherry Hill, N.J., 10 years ago was unique because of timing.

After decades of annual sales being stuck at less than 200,000 vehicles and a market share of less than 1.5 percent, Subaru, at the time the disaster struck, appeared to be finally finding its footing in the U.S. thanks to a fresh product lineup and new marketing.

Following the Great Recession — Subaru was the only mainstream automaker to post sales increases through the worst days of it — the automaker was seeing more widespread success with two redesigned crossovers: the Japan-built compact Forester and Indiana-built midsize Outback.

“Our business was extremely strong because we were on the very beginning of that small-SUV/crossover craze that began to happen,” Doll said.

While the disaster left a trail of destruction throughout Japan, Subaru’s vehicle assembly plant only had minor damage.

The critical issue that impacted Subaru and other automakers was that Renesas Electronics Corp., the world’s biggest maker of automotive microcontrollers at the time, had damaged plants and stopped production.

A bottleneck in the supply chain emerged.

After three to four weeks, it became clear that Subaru’s production levels were going to take a hit. Production wouldn’t be coming back to normal as quickly as Subaru hoped, Doll said.

“I don’t think it was very clearly understood, at least from the plant perspective, of how many parts were going to be affected by this microprocessor manufacturing operation that was devastated by the earthquake and flooding,” recalled Scott Brand, executive vice president at the plant.

Brand, who was the plant’s vice president of manufacturing in March 2011, said virtually any part that had an electronic control in it was impacted.

Roughly two and half to three weeks after the March 11 earthquake, the Indiana plant began an adjusted production plan once it knew fewer parts would be arriving.

Brand said that for most weeks, the plant operated Monday through Thursday as normal, but went to half days on Friday for each shift. Overtime also was cut.

With lower production levels, Subaru retailers eventually had to face extremely tight inventory levels of about 10 days during 2011, Doll recalled.

“In a way it was kind of helpful because the retailers learned that they could sell out of incoming inventory,” he said. “We would tell them: ‘Here’s the vehicles that we’re going to be getting, here’s the models that you’re going to be receiving.’ They would do a really good job of matching those up with customers.”

Successfully operating on such a short supply convinced retailers that they could manage on less than a 60-day inventory, Doll noted.

“That’s a good thing that happened because longer term, since that time, we’ve never had much more than a 50-day supply,” Doll said.

Despite the disaster dramatically cutting Subaru’s production from March through November, the automaker still eked out a 1.2 percent U.S. sales gain to 266,989 vehicles.

“I really believe we probably would have done closer to 300,000, if not on the other side of 300,000,” Doll said. “I think it kind of set us behind probably two years, all things considered.”

Subaru also felt the impact of the disaster elsewhere.

The launch of the redesigned 2012 Impreza, which was then built in Japan, and the rest of its 2012 models were delayed for two months.

But once production returned to normal in Japan and Indiana, and the 2012 model-year vehicles were launched, Subaru’s sales increases returned to pre-earthquake levels.

It’s been nearly a decade since Doll left for that ill-fated trip. But the experience remains with him.

“The biggest thing that we’ve learned over the years, including during the earthquake and tsunami years, is the fact that we have to continually be on guard for the next big thing that could happen,” Doll said.

“We don’t know what it might be. Like, who knew coronavirus was going to hit? But what we like to say is we try to manage our business, and we encourage our retailers to do the same thing. Manage your balance sheet. Make sure that you’re able to sustain yourself on the strength of your balance sheet and your equity position. So that when things happen, unexpectedly — and they seem to be happening more and more unexpectedly — you’re able to survive through it and keep your business at a very strong pace and at a very strong rate.”

The March 11, 2011, earthquake and tsunami occurred at a unique time for Subaru of America. The once-struggling niche brand was beginning to find its footing with a revamped lineup and sales were starting to finally grow.