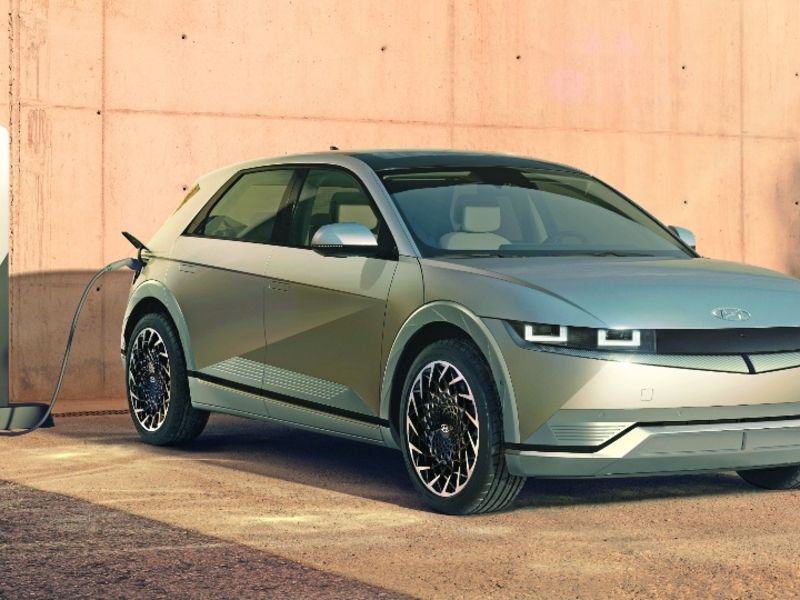 Hyundai’s Ioniq 5 electric crossover stands out as much for its styling as its technology.

As the leadoff model for the South Korean automaker’s Ioniq electric vehicle subbrand, it gets design cues, inside and out, that exude a next-generation, car-of-tomorrow vibe.

The body is rounded here and angular there. The proportions are low and wide. The headlights and taillights are pixelated rectangles. It boasts a large sunroof and even a solar panel. Hyundai has also incorporated digital side mirrors and auto-flush door handles that lend some Tesla flair.

The model rides on an extra-long wheelbase with super stubby overhangs and wheels pushed to the edges. The idea was to maximize the shape to yield more room inside.

The 118-inch wheelbase and flat floor deliver what Hyundai says is D-segment interior space in a midsize package. The Ioniq 5’s center console can slide back nearly 5.5 inches to create more space for front-seat passengers.

Hyundai Motor Co. is clearly pitching a futuristic vision with the Ioniq 5 to help establish the automaker as a global leader in the fledgling EV segment.

The crossover will launch in Europe and South Korea in the first half of the year and reach U.S. showrooms in the fall, company officials said.

Hyundai has big ambitions for the vehicle, which will be exported from its Ulsan plant. The company wants to sell 70,000 units this year and 100,000 annually from 2022, CEO Jaehoon Chang said, with about 30 percent of that global volume coming from North America.

The Ioniq 5 will be built on a new dedicated EV platform being shared by Hyundai, Kia and Genesis brands. The platform, called E-GMP — short for Electric-Global Modular Platform — will underpin the manufacturer’s bid to sell 1 million EVs worldwide by 2025.

That volume will come from 23 all-electric models, including EV derivatives of models offered with internal combustion engines. The Ioniq 5 is the first E-GMP nameplate, but Kia will follow this year with its own E-GMP crossover, code-named CV. The Hyundai brand plans to expand its EV lineup with the Ioniq 6, a sedan, and the Ioniq 7, a large crossover.

The Ioniq 5’s minimalistic cockpit features a 12-inch infotainment touch screen and a hoodless 12-inch digital gauge. The shifting lever is mounted to the steering column and activates with a twist function — twist forward for drive, backward for reverse.

Global design chief SangYup Lee said he tried to rethink every element and ask, how can this be reinvented? That’s one reason he ditched the traditional logo on the steering wheel cover.

“Having the emblem on the steering wheel is like the default. You always need to put that on the car,” Lee said. “So we’re asking the question, if you’re confident enough, can we actually take that emblem out?

“This shows how serious we are about every single detail.”

Also featured is an augmented reality head-up display, a first in a Hyundai vehicle.

Under the hood is a new all-electric powertrain built around two battery options: a long-range 72.6-kilowatt-hour battery (77.4 kWh for North America) and a standard 58-kWh battery.

Both power packs are optioned in either two-wheel-drive or all-wheel-drive configurations.

The awd layout gets a motor in the front and rear for a combined output as high as 225 kilowatts; the 2wd has only the rear motor, with an output of 160 kW or 125 kW, depending on the battery.

All versions deliver a top speed of 115 mph. And at the performance end of the spectrum, the big-battery, awd variant covers 0 to 62 mph in 5.2 seconds.

Hyundai said it is also considering a high-performance version in the vein of the N tuner series.

When it comes to range, the large-battery, single-motor version tops the rest of the offerings, providing up to 298 miles on a full charge. That figure is derived from the European standard, the Worldwide Harmonized Light Vehicles Test Procedure, considered a more generous estimate than the U.S. standard set by the EPA.

The Ioniq 5 can support both 400-volt and 800-volt charging, meaning it allows for better fast charging. Hyundai’s system uses the on-board inverter to boost a 400-volt current to 800 volts for charging without having to use any adapters or additional equipment.

With a 350-kW charger, the battery can recharge from 10 percent to 80 percent in 18 minutes. Hyundai said five minutes of charging provides 62 miles of range.

Sending handwritten notes with a twist
Uber, Lyft use rides to vaccines to get drivers, customers back on the platform
Keogh stands behind ‘Voltswagen’ marketing prank
2021 Honda Odyssey EX-L: Our Yearlong Odyssey With One Has Begun
In case you didn’t notice: New vehicles are shouting their names out loud