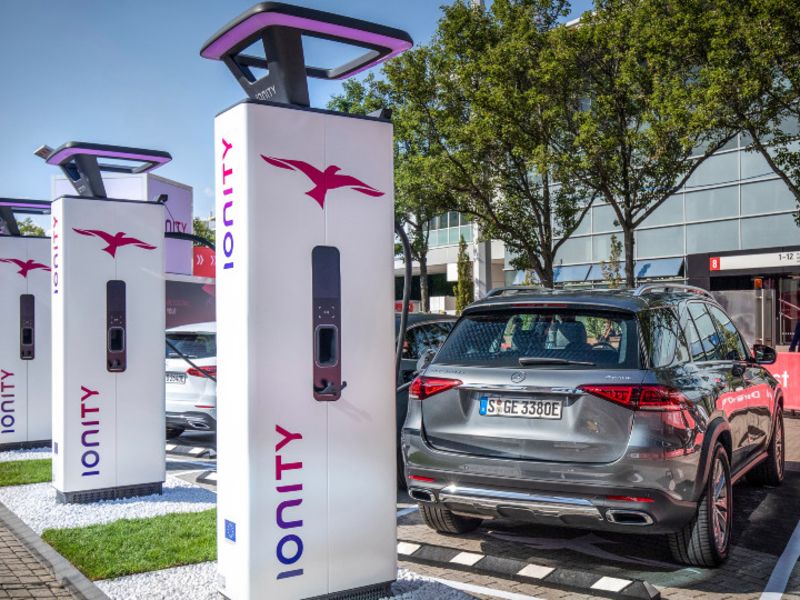 A venture formed by Volkswagen Group, BMW and other automakers is in talks to substantially expand its European electric-car charging network to keep pace with rising sales of battery-powered vehicles.

The automakers are considering additional funding for their Ionity consortium, which has been building out fast-charging points along European highways since 2017, emulating Tesla’s Supercharger network. After EV sales tripled in the region last year, the companies fear long lines at charging points could put off potential buyers.

Ionity and its shareholders are in discussions to work out a growth plan for the future, including a rapid expansion of high-speed charging infrastructure. “Additional investment opportunities are in consideration,” CEO Officer Michael Hajesch said in an interview.

Any extra funding would support Ionity beginning to target urban areas as well as less-frequented freeways where it’s currently absent. Each of the venture’s shareholders — which also include Daimler, Ford and Hyundai Motor Group — already have each invested roughly 200 million euros into the company.

Europe overtook China as the world’s biggest region for electric-car sales last year, when generous incentives combined with the threat of painful emissions fines to bolster shipments. As sales grow — VW alone is planning to double electric deliveries this year — manufacturers also are lobbying the European Union and governments to support 1 million public charging points by 2024, up from 224,500 last year.

“Carmakers and governments are engaged in a kind of shadow fight about who’ll take the hit on charging infrastructure spending,” said Marcus Kleinfeld, a partner at consultancy AlixPartners.

Other automakers are mulling taking matters into their own hands. VW’s Audi luxury-car brand is looking into building its own charging network in urban areas, CEO Markus Duesmann told Handelsblatt newspaper last month, citing the threat of a slowdown in EV sales without adequate infrastructure.

An expansion through Ionity is just one of the options being weighed. Munich-based Qwello, a station operator in two German cities, is in talks with a major automaker for a partnership to roll out public chargers, co-founder Henrik Thiele said in an interview.

“We’ll see a huge scarcity of charging points, and a lot of noise about this in the coming months,” Thiele said, adding that the number of EVs per charging station in Germany has doubled since 2017. Aside from talks with carmakers, the company will build out networks in one major German city and another in Scandinavia this year.

Since its founding, Ionity has built about 400 charging stations along highways, stretching from Portugal to Finland.