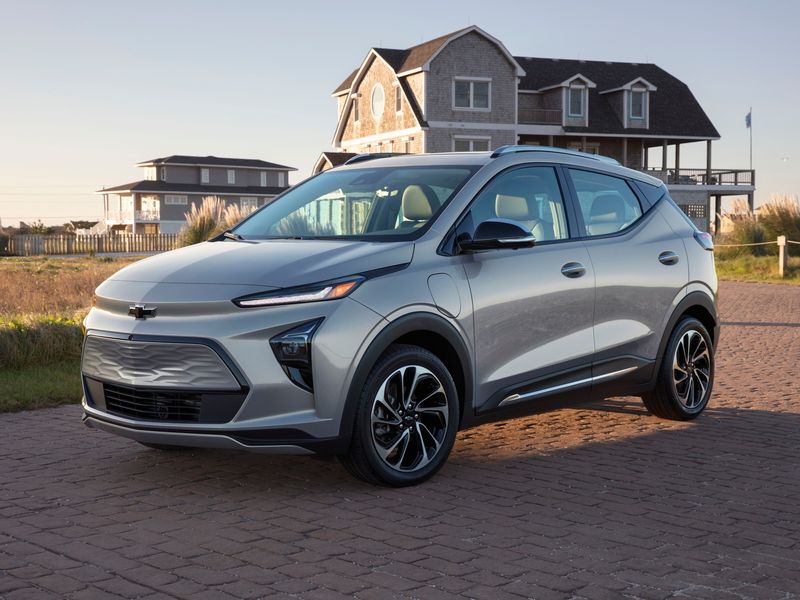 DETROIT — Chevrolet is cutting the base price of the Bolt EV by $5,500 and covering the cost to install chargers at buyers’ homes as it gives the electric car its first major updates and adds a more spacious crossover version.

General Motors hopes the price cut will encourage broader acceptance of electric vehicles as the automaker plans a wave of EVs that use more advanced battery technology and, at least initially, will be much more expensive.

“We want to put everyone in an EV and the new Bolt EUV and redesigned Bolt EV are crucial to doing so,” GM President Mark Reuss said in a statement. “Together, they enable mainstream customers to be part of our vision of zero crashes, zero emissions and zero congestion.”

Chevy unveiled the 2022 Bolt EV and Bolt EUV on Sunday in collaboration with Disney. It also began taking reservations for a limited-production Bolt EUV Launch Edition priced at $43,495.

Other trims of the Bolt EUV and EV will be sold at dealerships beginning this summer.

The two vehicles are built on the same architecture but do not share any exterior sheet metal, Chevy said. The Bolt EUV is about six inches longer, has more rear legroom and offers an available sunroof. It has an estimated battery range of 250 miles, versus 259 miles for the current and freshened Bolt EV.

The Bolt EUV will be the first Chevy to offer GM’s Super Cruise driver-assist technology. Super Cruise is among the features included on the Launch Edition, along with the sunroof, unique wheels, special badging and an illuminated charge port.

Chevy will pay for installation of Level 2 charging capability through Qmerit for customers who purchase or lease the Bolt EUV or Bolt EV.

The launches kick off GM’s path toward an all-electric lineup by 2035. But unlike the GMC Hummer EV pickup coming this fall and the Cadillac Lyriq early next year, the Bolts will continue to use GM’s current battery architecture instead of its new Ultium batteries. They will be built in Orion, Mich.

Chevy said it has sold more than 100,000 Bolt EVs globally since its 2017 launch, and that three-quarters of U.S. buyers have been new to GM. Of Chevy’s roughly 3,000 U.S. dealers, about 1,300 currently sell the Bolt EV, said Steve Majoros, vice president of Chevy marketing.

“We sell Bolt EV in 50 states today, and we will sell both the Bolt EV and the Bolt EUV in 50 states moving forward,” he said. “There are certain markets where EV adoption is a little ahead of the curve. But make no mistake, there are dedicated EV dealers and there are EV advocates in every single part of this country.”

The Hummer and Lyriq will be reserved through GM, which will then match customers with a dealer. But, aside from the Launch Edition Bolt EUV, Chevy dealers will receive traditional allocations of Bolts.

“We have got enough volume and we also have an established dealer pattern,” Majoros said. “So you’re going to see a distribution pattern that is much more aligned with what we would normally do.”

The freshened Bolt EV has a more upright front fascia than the previous generation and an updated interior to match the Bolt EUV. Both vehicles have a 10.2-inch-diagonal infotainment center and a one-pedal driving button that keeps the system active between drive cycles for regenerative braking. The steering wheel also has a “Regen on-demand” paddle.

A dual-level charge cord comes standard with the EUV and is available on the Bolt EV. For many customers, the charge cord will eliminate the need to purchase a home charger, Chevy said. A changeable plug will allow customers to charge with a standard 120-volt, three-prong outlet for Level 1 charging and a 240-volt outlet for Level 2 charging up to 7.2 kilowatts.

GM has also partnered with EVgo to triple the company’s charging infrastructure by adding more than 2,700 new fast chargers over the next five years, and the MyChevrolet app helps Bolt owners locate stations.

“Range anxiety is a term we need to get rid of,”said Jesse Ortega, executive chief engineer for Bolt EUV and Bolt EV. “Once you own an EV and once you experience it, it’s a non-issue.”