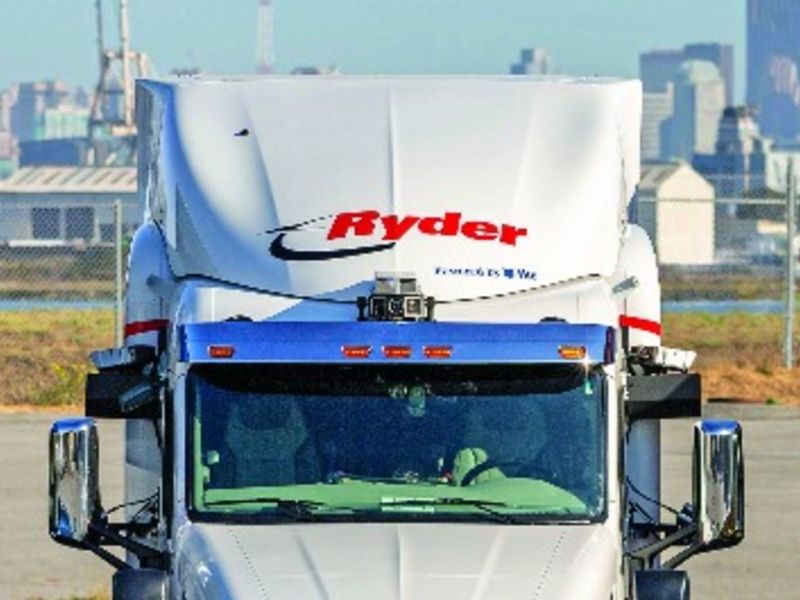 Executives from the autonomous trucking startup have fastidiously avoided public road testing and frowned upon using miles driven as a metric of overall progress. Last year, Ike became the first company not actually testing on public roads to file a safety self-assessment with federal regulators.

Ike’s outlier status will soon change. The company says it will be in limited testing along Interstate 280 in the Bay Area this month. While most companies might consider that a landmark moment, Ike CEO Alden Woodrow says it’s the “least exciting milestone” the company has recently crossed.

Woodrow points to a slate of new partnerships with some of the biggest logistics companies in the industry, including DHL, Ryder and NFI, as more adrenaline-pumping developments at 2-year-old Ike. As part of multiyear agreements, those three companies, plus others not yet disclosed, have reserved the first 1,000 Class 8 tractors outfitted with Ike’s self-driving systems.

When might those hit the road? In another detour from Silicon Valley convention, Woodrow isn’t concerned with deadlines and deployments. He prefers a more measured approach.

Ike’s partnership announcements arrive as competitors form similar relationships amid a growing sense that trucking and delivery will be the first segments to deploy autonomous driving technology at scale commercially.

Self-driving companies such as Waymo and Aurora Innovation, traditional automakers such as Daimler and Volvo and truck-specific autonomous startups Embark, Kodiak Robotics, Gatik, TuSimple and Ike have all sought to differentiate themselves and establish their self-driving competence in the $800 billion U.S. trucking industry.

For most, those efforts have entailed testing on public roads. In some cases, extensively so. TuSimple, for example, has driven Interstate 10 across Arizona, New Mexico and Texas. Some have established commercial operations and hauled goods while testing their systems.

Ike has conspicuously avoided those sort of arrangements.

“There’s so much incentive and pressure in our space to think about the short term and show tangible progress quickly,” Woodrow said. “But we made an early strategic decision to invest in the invisible work and focus on — if we want to be successful on a time frame of five to 10 years — what should we do now to maximize the probability of success? That’s a very different path than convincing investors about our progress over the next three months.”

Ike raised $52 million in its Series A funding round in February 2019. Woodrow says more than half of that remains in the company’s coffers at a time when COVID-19 has generally made it more difficult to get funding.

Instead of spending resources on public road testing, Ike employs a regimen that involves heavy use of simulation and closed-course testing, which Woodrow says is both lower risk and more productive. In an updated version of the safety self-assessment filed last month with NHTSA, Ike said its routine includes “extensively” testing two crash scenarios that commonly involve Class 8 trucks — stopped or slowed traffic just ahead of the truck and sudden cut-ins by other vehicles — in simulation.

When Ike does begin testing along I-280, it will be to verify the results it sees in simulation and closed-course testing, and on-road time will be kept to a minimum.

Woodrow says that approach has resonated with the likes of DHL, NFI and Ryder.

“They’re in the business of driving around the world every day, and they know how dangerous that can be,” he said. “So this was not a difficult conversation to have. When we go in and tell our story about why we limit on-road testing to the largest possible degree and invest in things that are more efficient and lower risk, I think we really see eye to eye about that.”

The partners are doing extensive work to plan which routes make the most operational and business sense. That entails cobbling together data on freight volume along specific routes.

Working with the established logistics industry is an important part of Ike’s strategy.

“They’re helping us understand how the logistics business really works, and that’d be hard to get if we were out there on our own,” Woodrow said. “Conventional wisdom in Silicon Valley is that you build your own fleet, come in, disrupt the industry and take on the existing businesses. We’ve believed from the start that we need to figure out how to empower the existing players.”