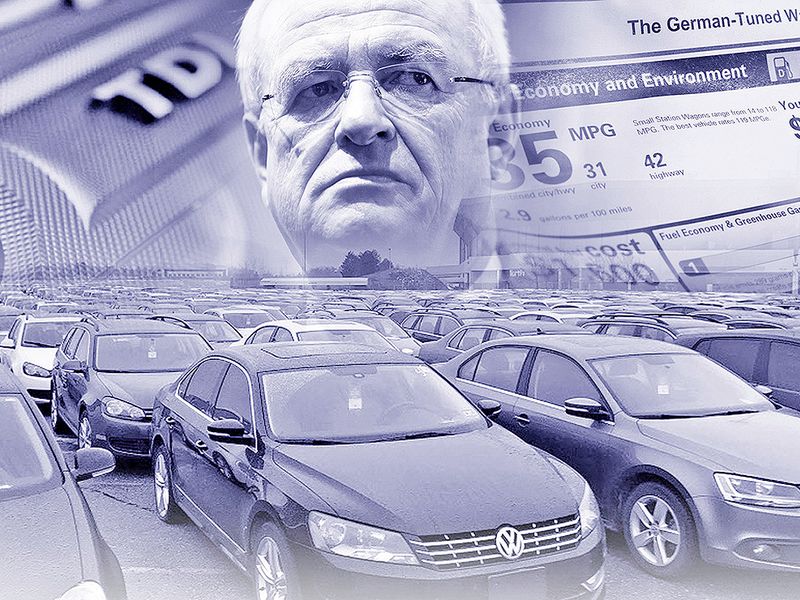 After five long years, the scars of the largest, most expensive scandal in automotive history are finally starting to fade.

As a brand, Volkswagen’s U.S. market share is back to where it was in the days before its $33.3 billion diesel emissions scandal exploded in public on Sept. 18, 2015. Its dealer network is once again selling more cars than it is buying back. And the last of 36 massive parking lots across the U.S., which once were filled with hundreds of thousands of illicit turbodiesels, finally emptied and closed just last month near the harbor in Baltimore.

Next week, the automaker will turn another page on its felonious past as it introduces the ID4, a battery-electric compact crossover that will go on sale in the U.S. by the end of this year with an expected range of more than 300 miles and a starting price of just more than $30,000, after tax credits and incentives. It will be the brand’s first deep foray into EVs in the U.S. and follows entries from VW Group stablemates Audi and Porsche — which also were involved in the emissions ordeal.

Fully 99 percent of Volkswagen’s 650 U.S. dealerships have signed up to sell the ID4 and subsequent planned EVs from Volkswagen, thanks in part to fat subsidies from the factory and a keen interest in changing the narrative and winning back customers.

But it was more than just time that healed Volkswagen’s gaping, self-inflicted wound — gobs and gobs of money also salved the German brand’s U.S. operations and restored them to a healthier place.

Even for consumers who might pay attention only when they buy a new car, the news of Volkswagen’s diesel emissions violations has been hard to miss. Here’s the short version of what happened:

More than a dozen years ago, VW engineers in Germany were tasked with coming up with a cleaner-burning turbodiesel engine to meet tougher new emissions standards. Initially, they failed.

But rather than accept that failure, they installed software that made the engines appear compliant if they were being tested but under normal driving conditions emitted up to 40 times more nitrogen oxides than allowed, a violation of the federal Clean Air Act.

The cheat escaped external detection until 2014, when a group of researchers from West Virginia University tested a diesel VW Sportwagen on the road instead of in a lab. Their findings eventually raised the interest of the EPA and the California Air Resources Board. Volkswagen actively lied and tried to cover up the cheat, but at a meeting in California on Sept. 3, 2015, an American executive with Volkswagen blew the whistle.

The ensuing legal and marketplace maelstrom would cost Volkswagen Group billions globally, many executives their jobs and some their freedom and mar the reputations of other automakers and brands that had cut corners or employed cheat software on their diesel engines — including Daimler and BMW.

In 2017, Volkswagen pleaded guilty to three felonies in U.S. District Court in Detroit and was forced to pay billions in fines and restitution.

Most civil cases against the automaker have been settled, but some continue to wind their way through the courts.

Meanwhile, Oliver Schmidt — who headed Volkswagen’s environmental compliance office in suburban Detroit and is the highest-ranking VW executive prosecuted so far in the U.S. — is set to complete his seven-year sentence on Christmas Day 2022, according to federal records.

Schmidt, 51, agreed in July to be extradited to his native Germany, where he is to finish his sentence. He was arrested at Miami International Airport in January 2017 while attempting to return to Germany after a holiday vacation in Florida and pleaded guilty that December. He remains in the U.S. awaiting transfer to Germany.

Another former VW engineer, James Liang, 66, also received a prison sentence for his role in the emissions-cheating conspiracy. However, unlike Schmidt, Liang cooperated with investigators and was released from federal prison in November 2019, after 27 months of his 40-month sentence.

All of these expensive and embarrassing escapades weighed down one of the world’s largest automakers. It cost several top VW Group executives — including former Audi boss Rupert Stadler — their jobs, and blew up the automaker’s product plans across much of the world.

But in its U.S. dealerships? That’s where the rubber quite literally stopped hitting the road. At least for a while.

“When this happened, everything just stopped,” recalled Danny McKenna of McKenna Auto Group, which continues to operate two Volkswagen dealerships in suburban Los Angeles, including one in Huntington Beach, Calif.

His father operated as many as nine Volkswagen franchises in California and Hawaii in the decades since buying the first in the 1950s and carved out a good life from sales of the Beetle and Microbus and later the Rabbit, Jetta, Tiguan and Golf.

When the scandal hit in 2015, McKenna said his new-vehicle sales were cut in half and never fully recovered as he lost longtime customers to brands such as Subaru.

“It’s a hard brand to sell, and it’s a hard brand to push, and people’s perception of Volkswagen after the diesel [scandal] is that the brand isn’t on the up and up,” McKenna said. “It doesn’t matter how many other manufacturers got in the same hot water; it didn’t hurt them like it hurt Volkswagen because [the government] used Volkswagen as the example. They nailed these guys to the wall, and people don’t forget that.”

While McKenna’s dealerships are some of Volkswagen’s oldest in the U.S., the dealership that Ashlee Church runs in rural southern Illinois was one of its newest when the emissions scandal started. Volkswagen of Marion had just opened its newly constructed dealership in March 2015, and Church, the dealership’s now-33-year-old general manager, said it was a rough way to start.

“When we got the stop-sale at the beginning, we had no idea what the long-term consequences of what we were seeing would be,” she recalled. “That became more clear over the next two or three months.”

Volkswagen of America has a long-term goal to get back to a 5 percent market share in the U.S., roughly more than double what it has now. The automaker has made some progress by bringing crossovers into its portfolio: the three-row Atlas and two-row Atlas Cross Sport, a redesigned Tiguan — the brand’s top-selling vehicle in the U.S. — and soon a subcompact crossover that will slot below the Tiguan in price, to be named the Taos.

Tyson Jominy, vice president of Power Information Network operations at J.D. Power, said Volkswagen initially saw 30 percent of its market share fall off because of the diesel emissions scandal, with brand loyalty bottoming out in 2016 and increasing each year since.

This year, owner loyalty is nearly 42 percent — still below the industry average of 48 percent but climbing. Over the past year, VW’s loyalty has risen 3.5 percentage points, making it the top mover among mainstream brands, Jominy said.

Much of the credit for the move goes to Volkswagen’s expansion of its crossover offerings. “It’s amazing what happens to loyalty when you provide options for consumers to stay in the brand,” Jominy said.

But according to shopping data from Kelley Blue Book, Volkswagen’s biggest hurdle remains getting into the conversation.

The German brand has been stuck in a rut — with between only 6 and 8 percent of mass-market brand shoppers willing to consider Volkswagen products — since 2013, including the time it was struggling to emerge from its scandal. Compare that with industry-leading brands, including Toyota and Ford, whose products are considered by roughly a third of all new-vehicle buyers.

During the diesel crisis, with its reputation in tatters and while it was actively buying back hundreds of thousands of vehicles, Volkswagen’s internal metrics showed that up to 32 percent of new-vehicle purchasers had VW on their “never buy” list — a high number for a struggling brand.

That number has been halved as the emissions imbroglio gets further in the rearview mirror, but it’s still higher than most brands and something Volkswagen of America continues to work on, CEO Scott Keogh says.

“It’s heading in the right direction,” Keogh told Automotive News last month. “But if I look at demand for our products, our sales and where we’re heading, the market is heading in a positive direction for us. But we’ve got to earn it.”

Keogh, 51, was named CEO in 2018 after more than a dozen years with sibling brand Audi. As the first American to helm the brand in North America in more than 25 years, Keogh’s appointment — and the creation of a semiautonomous North American region — gave VW dealers hope for a stable hand on the rudder who would look out for their interests and guide them safely past the emissions scandal.

“I cannot say enough incredible things about the Volkswagen dealer network, and how they managed and handled [the buybacks] and stayed committed to the brand and dedicated to the brand,” Keogh said.

Volkswagen today is not the same company it was even five years ago, Keogh argues. Not even close.

“As someone who’s navigated the culture of this company for about 15 years, it’s just a different culture now, dramatically more open and one where anyone can speak up and express your point.

“It’s far less hierarchical. It’s transformed,” he said. And with the diesel emissions scandal behind it, Volkswagen also is a company “on a mission” to make electric vehicles affordable and attainable for average consumers, Keogh said.

For Volkswagen dealers, successfully navigating the last five years has required different strategies, a recognition of their place in the industry and a belief in each other.

Early on, Volkswagen dealers were lining up to sue the manufacturer for what it had done, and some did. Factory-dealer relations were frustratingly poor, exacerbated by years of feeling ignored or dictated to by Germany, and franchise values were at rock bottom.

“We used to be lower than whale shit, or whatever the lowest thing on Earth is,” Luciano said. But the crisis changed Volkswagen, convinced the company to listen to its U.S. dealers and invested those dealers in their shared survival.

One reason relations improved was economic: Volkswagen subsidized its dealer network heavily during the buyback period to keep its franchises alive. It also was able to resell many of the turbodiesels that its dealers had repurchased after repairs.

With its diesel customers, Volkswagen offered generous premiums during the buyback period — often 130 or 140 percent of the vehicle’s value. It didn’t convince most to stay — the majority of consumers didn’t purchase another Volkswagen with the proceeds — but the offers did lay the groundwork for their potential return to the brand, Luciano said.

“When this first hit the news, a lot of people thought their car was going to be worth $1,” he said. “Once we bought the first few cars back, and those deals were so strong, it eased customers’ minds. It was a smart play. It was the right play.”

Some dealers, such as Church, found success in reselling the fixed turbodiesels that once were parked in lots across the country, such as the one in Baltimore. It required a “pivot” in her store’s strategy, she said, to focus on remarketing the TDIs, but it was made easier because Volkswagen again opened its checkbook, offering unlimited-mile warranties and generous financing terms.

Meanwhile, Volkswagen of America concentrated on changing its culture.