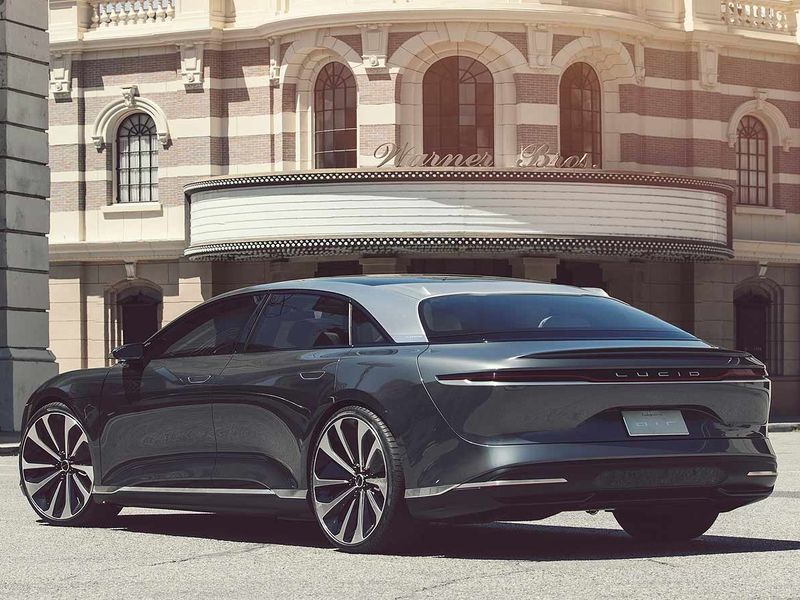 If the Lucid Air engineering mules starting to roll down the line at the company’s new $700 million Arizona assembly plant don’t expose any flaws in manufacturing or in punishing real-world testing, production of the high-performance electric sedan will start next spring.

Lucid officials on Wednesday showed the production-intent Air large sedan, the first of several planned variants of the car. The Dream Edition model will launch first with 1,080 hp, hit 60 mph in about 2.5 seconds and cruise as far as 517 miles on a single charge, the company claims.

The car has a 900-volt electrical system that can be charged at the rate of 20 miles per minute.

With the market filling fast with pure EVs from luxury brands such as Jaguar, Audi, Mercedes, Porsche and Cadillac, Lucid aims to create a niche by being different.

Lucid officials made several claims in an introductory video for the car Wednesday. They said the Air will have the largest frunk (front trunk) of any vehicle on the road, but did not offer any measurements. The powertrain and battery pack is 17 percent more efficient than the nearest competitor, but company officials didn’t provide any figures.

The Air’s powertrain, according to Lucid CEO Peter Rawlinson — a former Tesla engineer — is the focal point of the car. Lucid engineers combined the electric motor, transmission and power inverter into one unit and then worked on reducing its size while increasing efficiency. That, and a battery pack that is curved to aid aerodynamics, and interior packaging, created the Air’s spacious cabin, though measurements for legroom, headroom, etc., have not been released.

However, in a video, the car’s rear seats folded forward and a surfboard was placed inside. The rear storage area has two levels.

Derek Jenkins, Lucid’s vice president of operations, described the Air’s interior and electronics as being inspired by aviation.

Lucid will add an Air-based crossover called the Gravity to its lineup as part of a 10-year plan. Part of those plans include rolling out home energy storage systems that use the same batteries as Lucid’s vehicles and selling EV technology to other automakers.

“That’s part of strategy for the next couple of years,” he said. “I’m cognizant of what a hot space this is at the moment.” But Rawlinson added that Lucid’s priority now is to monetize its software, hardware and energy storage businesses.

The California startup plans to sell vehicles two ways: through 20 “studios” located throughout North America slated to open by the end of next year, and online.

Here is the planned launch cadence:

Big Jeep store opens after pandemic changes sales scene
Automated truck company goes own way
Polestar Precept concept going into production
If you like electric cars, or motorcycles (or both!), stop what you’re doing and watch Long Way Up
This Destroyed 2020 Chevrolet Corvette C8 Is A Very Sad Sight Indeed