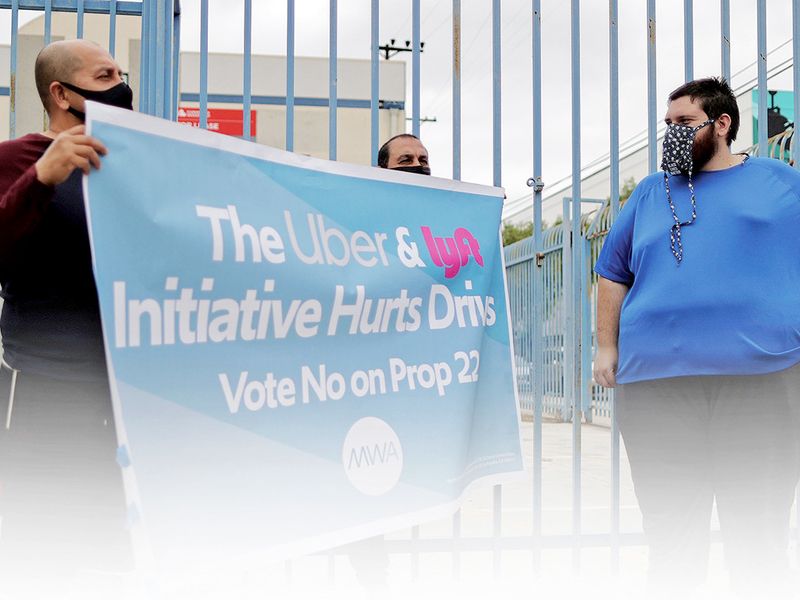 Tensions over whether drivers for Uber Technologies Inc. and Lyft Inc. should be considered contractors or employees have come to a head.

For years, the ride-hailing companies have classified their workers as independent contractors rather than employees — at the same time avoiding having to provide full employee benefits.

Both companies have long said that changing the way drivers are classified would have a severe impact on already- thin profit margins. Now they face that possibility in the nation’s most populous state.

In California, both companies — along with food delivery service DoorDash — are campaigning for a ballot measure set for a vote in November that would exempt app-based transportation and delivery companies from requirements of a new state labor law.

“That is obviously problematic for the companies because it upends the entire model from which they’ve grown,” Bryant Greening, attorney at LegalRideshare, a personal injury law firm in Chicago, told Automotive News. “The companies are successful in part because they can keep costs low, pay drivers in many cases under the minimum wage … and not provide compensation when a driver is injured on the job.

“Many of the expenses that a normal business has, Uber, Lyft and other gig companies have been able to avoid, and that’s allowed their businesses to bloom into what we see them as today,” he added. “This is a major setback for them because it changes the entire model and forces them to reconsider whether the industries are viable with employees rather than independent contractors.”

Lawmakers in Illinois and other states are similarly advocating for adjustments to their gig worker laws.

Uber has gone so far as to say it is considering a shift to a franchise model to avoid this — and Lyft is reportedly considering operational changes as well.

A franchise model could mean the companies would license their technology to intermediary operators of vehicle fleets that would be responsible for the drivers.
However, the ride-hailing companies are still reeling from COVID- 19-related ridership losses. Plus, implementing additional driver and rider safety measures in vehicles as a result of the pandemic could be a monumental expense.

“I think the big question is, what would a franchise even look like for a big ride-hailing company? How would you scale that? Would there be regional franchises, or would it be even more targeted than that?” said Jessica Caldwell, executive director of insights at Edmunds. “I think that would be pretty complex in terms of how to operate.”

According to an Uber spokesperson, “This is similar to how Uber Black operated a decade ago, with higher prices and less reliability.” Uber Black is a premium service featuring luxury vehicles and professional drivers.

“In some models, drivers bring their own cars; in others, the cars are owned by the fleet. In either case, drivers would likely earn a predetermined hourly wage for their time on-app — but, in exchange, fleets would need to monitor and enforce drivers’ activity and efficiency, for instance by putting drivers into shifts, dictating where and when they must drive and enforcing trip-acceptance criteria.”

Still, he added: “We are not sure whether a fleet model would ultimately be viable in California.”

With lower rates, near-instantaneous pickups and flexibility, app-based ride-hailing companies such as Uber and Lyft disrupted the decades-old model of taxis and limousines.

These companies “have their place in the ecosystem,” said Robert Alexander, president of the National Limousine Association, which represents taxis and chauffeured ground transportation.

“But what we don’t understand is they get to operate under their own set of rules.”

In May, the California attorney general’s office and the cities of Los Angeles, San Diego and San Francisco sued the ride-hailing giants for not complying with the state’s worker law.

The AG then filed for an injunction to force the companies to reclassify their drivers immediately. The injunction was granted on Aug. 10.

Uber and Lyft threatened to temporarily shut down operations in the state if forced to provide drivers the benefits typically given to employees — which is largely the cause of public outcry against the companies.

While they were spared from having to immediately convert their California drivers to employees, the respite is temporary.

“There’s a whole list of things that are going to drive up [these companies’] labor costs extensively, and they would have to pass that on to the consumer or figure out where they are going to make up those costs somewhere else,” said Tia Koonse, legal and policy manager at the UCLA Labor Center.

The companies are still challenging a judge’s order to comply with the state labor law, and the appeals court decision may not come before that critical ballot measure is voted on.

The ride-hailing companies say service could be scaled back if they are forced to comply with the new labor law.

Uber’s current system “forces every worker to choose between being an employee with more benefits but less flexibility, or an independent contractor with more flexibility but almost no safety net,” Uber CEO Dara Khosrowshahi said in an op-ed in The New York Times last month.

He said Uber is ready to pay its drivers more, but only to an extent.

“Uber would only have full-time jobs for a small fraction of our current drivers and only be able to operate in many fewer cities than today” if drivers become employees, he said.

“Rides would be more expensive, which would significantly reduce the number of rides people could take and, in turn, the number of drivers needed to provide those trips,” he added.

“Uber would not be as widely available to riders, and drivers would lose the flexibility they have today if they became employees.”

Khosrowshahi said that instead, there needs to be broader change around the gig economy.

Brian Lentsch, a part-time Uber and Lyft driver in Sacramento, says the contractor model helps him prioritize his full-time job as a computer server administrator — which can often require last-minute work — while earning extra income on Friday and Saturday evenings.

“It works out for me because if something happens, I just don’t go online. When I’m available, I just log in and start driving,” Lentsch said. “The flexibility is what drew me to it in the first place.”

It would be nice to have “some of the benefits and earnings guarantees [of being an employee] without having to go to a scheduled employee model,” said Lentsch, 58, which is why he supports the changes described in the Uber-Lyft-DoorDash proposal.

Others who rely on driving for ride-hailing services as their only source of income, however, want to see more.

Uber and Lyft have taken major hits this year to their already-struggling ride businesses as a result of COVID-19.

Lyft reported a 61 percent decline in revenue in the second quarter to $339 million.

Ride-hailing companies also had difficulty getting covered by the coronavirus aid package.

This all likely makes Uber’s franchise threat just that — a threat.

“These companies have definitely had some financial woes, especially with a business model that has not always proven to be particularly stable,” Edmunds’ Caldwell said. “If that’s the case, then do they even have the money to help work out the financing for some of the franchises or would that fall onto the franchisees?”

But, “if the lawmakers want the law to be extremely strict, as it is currently, then Uber and Lyft have a long way to go to comply with it,” he said.

“California is leading the way in what I believe will be a national trend.”