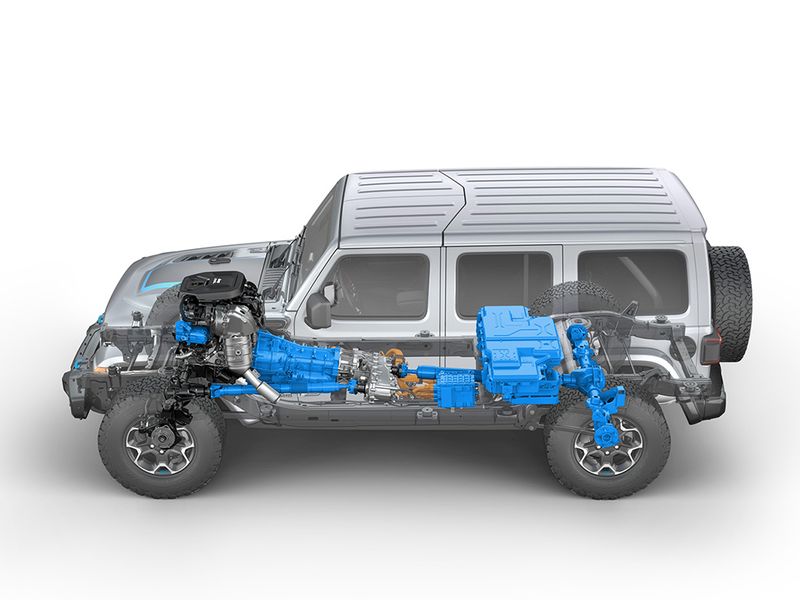 Jeep Wrangler buyers looking to go green will be able to get 25 miles of electric range in the upcoming plug-in version that will bear the 4xe badge.

The 2021 Wrangler hybrid is expected to arrive in U.S. showrooms by the end of the year, with Fiat Chrysler CEO Mike Manley saying recently that it will be on the front line of Jeep’s North America electrification strategy. The hybrid off-roader will go on sale in Europe and China in early 2021.

The Wrangler 4xe delivers 375 hp and will bring a nearly silent ride to the rugged trail mate. Jeep teased the electrified Wrangler in July with a video showing it quietly navigating the wilderness.

Michael Bly, FCA’s head of global propulsion systems, said the automaker is spending $10 billion to electrify its lineup. The plug-in hybrid versions of the Renegade and Compass are leading the way for the brand’s entry into the EV market in Europe. Production began in June for both of those vehicles.

The Wrangler plug-in will give drivers 470 pound-feet of torque to work with. Bly said the vehicle has nearly 400 miles of range when fully charged.

“The customer gets what they expect: a quiet, open-air freedom, a more fun to drive on-road experience and a new level of benchmark off-road capability,” Bly said during a briefing last week. “Basically, they’re going to get everything in one package.”

The electrified Wrangler’s 400-volt, 17-kWh, 96-cell lithium ion battery pack uses nickel manganese cobalt graphite chemistry. The pack and controls mount underneath the second-row seat, the automaker said, where it is protected from outside elements.

Jeep redesigned the Wrangler 4xe’s second-row seat to allow the bottom cushion to flip forward for access to the battery. The automaker said the battery pack is encased in aluminum and “is fitted with a dedicated heating and cooling circuit to keep the battery at its optimum temperature for best performance.”

The Wrangler 4xe is capable of fording water up to 30 inches like all Trail-Rated Wranglers.

“We’ve logged over 1.4 million miles of real world on-road and off-road validation in all the corners of the world,” Bly said. “We want to make sure this do-anything Wrangler does everything we promise.”

Which Generation Of Porsche Cayman Is The Best?
Pacifica is freshened as 300 lingers for Chrysler
Tesla’s Musk promises dramatic cuts in EV costs
$141,070 Tesla Model S Plaid to deliver more than 500 miles of range, 1,100-plus hp, sub-9.0-second 1/4-mile time
Lamborghini Centenario Roadster: More Than An Aventador With A Flashy Bodykit?