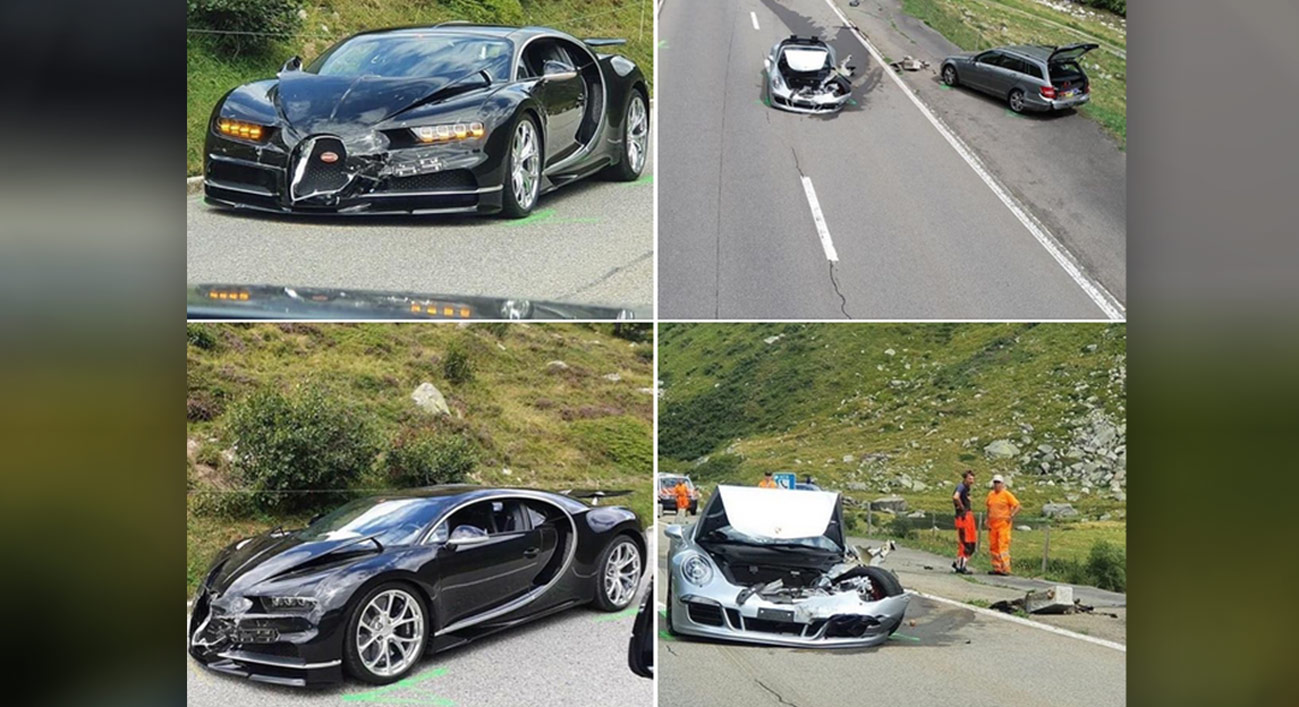 A Bugatti Chiron and a Porsche 911 Cabriolet have been badly damaged in a crash along the scenic Gotthard Pass in Switzerland.

It is believed that the Chiron and the 911 were driving behind a Mercedes-Benz C-Class up the pass which itself was stuck behind a slow-moving motorhome. The driver of the Bugatti reportedly pulled into the other lane and hit the throttle in an attempt to overtake the three vehicles ahead.

However, the 911 is thought to have also pulled out and the Bugatti rear-ended the Porsche, pushing it into the C-Class Estate. The Bugatti is then thought to have hit the mobile home. As you can see in the images shared on social media, including from “Rainier Johnson Supercars”, some of the vehicles also hit the stone columns on the side of the road, preventing them from sliding down off the road and down a grassy slope but causing further damage.

€3.5M Bugatti Chiron and Porsche 911 Crash in Switzerland. 😱🇨🇭 Three cars were in a group following a camper….

Images taken at the scene show that the Porsche 911 suffered the most damage as it appears to have been pushed into one of the concrete barriers. The hood is bent upwards and one of the front wheels has been knocked out of place. As for the Bugatti Chiron, the damage it sustained appears isolated to the front end with the carbon fiber bumper broken, the front grille damaged, and part of the hood damaged. The hood has also popped open, presumably as part of its pedestrian protection system.

Local publication 20 Minuten asserts that the passenger of the Mercedes-Benz suffered serious injuries and was transported to a nearby hospital.

The road was temporarily closed as the crash was investigated and cleared. It is claimed that up to 3.7 million francs ($4.06 million) worth of property damage has been done.

Does The New Aston Martin Vantage Roadster Drive As Great As It Looks?
Infiniti previews more premium overhaul of QX60 crossover
Is This Another Jeep Thing? Wrangler Found Abandoned Hanging Off A Californian Cliff
Running From The Police With A U-Haul Truck Is Not A Good Idea
Eight more VW employees charged in diesel scandal