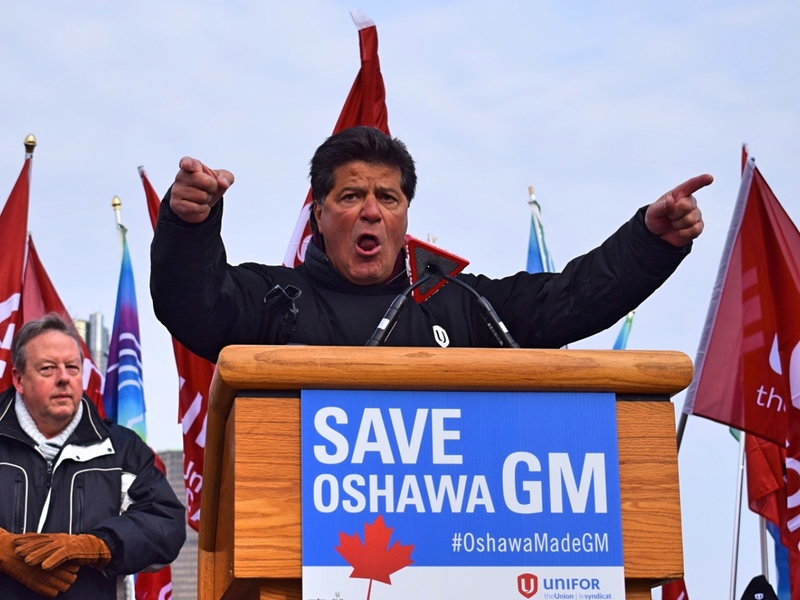 Labor negotiations between Unifor and the Detroit 3 formally begin in Toronto on Wednesday, kicking off a round of talks that could prove pivotal to the future of Canada’s shrinking automotive assembly base.

“We’ve got our hands full with all of them,” Unifor President Jerry Dias told Automotive News Canada this week, ahead of the negotiations.

Union officials are scheduled to meet with executives from the Detroit companies at a downtown Toronto hotel beginning Wednesday morning. While Unifor leaders will exchange their demands with the automakers, the traditional handshakes between executives and union brass will not take place due to COVID-19 health concerns.

“It’ll be my opportunity to tell them exactly what’s on my mind and how I expect negotiations to proceed and what my drop-dead positions are,” Dias said.

Contracts between Unifor, which represents about 20,000 workers in this round of negotiations, and the Detroit automakers expire on Sept. 21. Dias has said the union will push for product commitments from the companies at each of their Canadian plants, particularly at Ford Motor Co.’s Oakville assembly plant and Fiat Chrysler Automobiles’ facilities in Brampton and Windsor. (GM’s sole Canadian assembly plant, in Ingersoll, Ontario, is on a separate contract that ends in 2021.)

The negotiations come at a crucial moment for Canadian auto manufacturing. The Detroit 3 now have just four assembly plants in the country following the end of vehicle assembly at GM’s Oshawa factory in 2019.

One of the three shifts at FCA’s Windsor minivan plant was cut in July amid shrinking sales in the segment, putting about 1,375 people out of work. Meanwhile, uncertainty surrounds long-term production plans at its Brampton plant, which builds the aging but profitable Dodge Charger and Challenger muscle cars as well as the Chrysler 300 sedan.

Ford’s Oakville plant will reportedly be without a production mandate after 2023. Citing industry sources, AutoForecast Solutions in June said the automaker no longer plans to build the next-generation Ford Edge crossover in Oakville. Ford has not confirmed the report.

“Ford of Canada and Unifor must work collaboratively to ensure we remain operationally competitive amidst intense global competition,” a Ford of Canada spokeswoman said in a statement. “It is a shared responsibility with Unifor to ensure the company can emerge from the COVID-19 crisis positioned for future success. Together, we can strengthen the business case for auto manufacturing in Canada.”

No GM assembly plant is covered under the current contract although the union still hopes to secure long-term commitments for the St. Catharines Propulsion Plant and the new aftermarket parts operation in Oshawa.

Long-term uncertainty about the pandemic and economic recovery could hurt Unifor in its bid to secure product commitments, analysts said. The union also faces headwinds from 2019 contracts between the companies and the UAW, which leave Unifor fewer options to work with for production mandates. And as the November presidential election draws near, the Detroit automakers might come under pressure to avoid major investments outside of the United States.

“This is a tough hand to play,” said Kristin Dziczek, vice president of industry, labor and economics at the Center for Automotive Research in Ann Arbor, Mich.

Dias, whose union has sparred in recent years with GM, said he is a “realist” who understands the challenges the industry faces during the pandemic and economic downturn. But Unifor will not change its approach to negotiations, he said, adding that he was optimistic the union would secure gains for its members.

“When the companies are doing incredibly well and making money hand over fist, they come to the table as if they’re losing money and because their argument is always about whipsawing us against the UAW and the UAW whipsawing against us,” Dias said. “There’s always the threat, so who cares?”

Unifor is likely to spend the next four weeks determining which automaker to select as its target for pattern bargaining. Historically, the first contract ratified by members sets the pattern for the other two. The union is set to announce the target on Sept. 8, less than three weeks before the contracts expire.

“There’s a lot of work to be done in a very short period of time,” Dias said.

The talks come as the automakers attempt to navigate the pandemic and its economic fallout globally. GM, for instance, reported a $758-million loss in the second quarter. Ford reported a 50 percent drop in revenue on the quarter, though it reported a $1.1-billion profit in large part due to its investment in Argo AI.

Unifor is likely to play up Canada’s strengths, including its educated and skilled labor force and a favorable Canadian-U.S. dollar exchange rate.

“If we can’t find solutions when they would print money here in Canada, then we’ll never find a solution,” Dias said during the July 7 edition of Automotive News’ “Daily Drive” podcast.

Labor relations between the Detroit 3 and unions in Canada and the United States have been contentious in recent years, particularly at GM. UAW workers struck GM’s plants in 2019, as did Unifor workers in Ingersoll in 2017. Unifor also launched a cross-border media campaign against GM’s decision to end vehicle production in Oshawa in 2019.

Union leaders are scheduled to meet first with executives at FCA at 9:30 a.m. ET, followed by GM at 11:30 a.m. and Ford at 2 p.m. Unifor leaders are then scheduled to hold a press conference at 3 p.m.