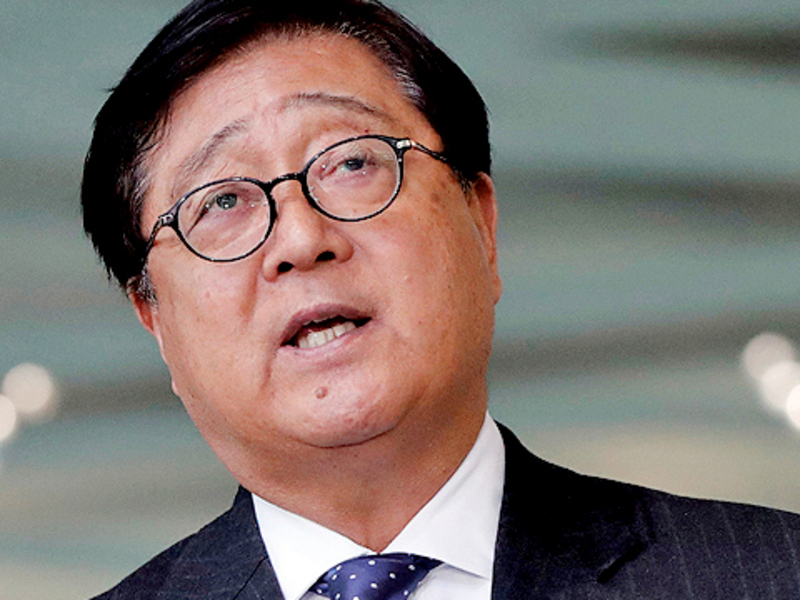 The 71-year-old executive stepped down effective Aug. 7, the Japanese automaker said in a release.

The company did not give details about his health condition but said that Masuko would be staying on as a “special advisor” to the company he has led for 15 years.

Current CEO Takao Kato will take over as temporary chairman, the company said.

Masuko became president of Mitsubishi Motors in 2005 and cycled through various positions at the top, including the CEO and chairman posts, during a pivotal period at the small-sized Japanese player. Masuko hatched numerous plans to reboot the brand’s flagging fortunes, oversaw its foray into electrified vehicles and helped pen its 2016 partnership with Nissan.

With Mitsubishi then part of the Renault Nissan alliance, Masuko exerted a stabilizing influence over the company when the alliance was nearly torn apart by the 2018 arrest of Carlos Ghosn, who was ejected from the group after positioning himself as chairman of all three companies.

Masuko ascended to the top of Mitsubishi Motors even though he transferred into the company late in his career, a rarity in Japan, where company lifers typically climb to the top of the ladder. He was sent by Mitsubishi Group’s trading firm Mitsubishi Corp., then one of its top shareholders, to help revive the automaker after its failed relationship with DaimlerChrylser.

He stepped in just before the Great Recession shook up the global auto industry.

Nevertheless, Masuko pushed ahead with rebranding Mitsubishi as a purveyor of electrified vehicles, crossovers and SUVs.

Mitsubishi tried to carve out a niche spanning the segments with its Outlander PHEV plug-in hybrid crossover. But fragile finances meant Mitsubishi was usually strapped to invest deeply in new technologies for electrification and autonomous driving.

Masuko, then already 65, seemed poised to ease himself into retirement in 2014, when he handed the presidency to Tetsuro Aikawa, a veteran engineer noted for leading development of such Japan-market minicars as Mitsubishi’s eK Wagon and the egg-shaped i.
Masuko took the then-vacant CEO position in addition to remaining chairman.

As part of the revival plan under Masuko and Aikawa, Mitsubishi decided to shutter its only North American assembly plant, the underutilized factory in Normal, Ill., it opened in 1988 as a joint venture with then-partner Chrysler. At the time, it was the only Japanese-owned U.S. auto factory whose hourly workers are represented by the United Auto Workers.

Mitsubishi also dangled plans for various new EVs and plug-in hybrids, none of which materialized.

But any rebound was soon derailed in 2016, when Mitsubishi admitted it had been overstating fuel economy ratings on four minicar models sold in Japan by Mitsubishi and Nissan.

The bogus fuel economy results were discovered when Nissan noticed discrepancies and called out Mitsubishi.

Mitsubishi’s sales tanked and so did its share price.

Mitsubishi’s plunging stock created a window for Nissan, then run by Ghosn, to swoop in under the pretense of being a white knight and take a controlling 34 percent in Mitsubishi. Aikawa resigned to take responsibility for the scandal, and Nissan sealed the new partnership in late 2016. Ghosn installed himself as Mitsubishi chairman; Masuko stayed on as CEO for continuity.

When Ghosn was arrested in 2018, fired as chairman and then dismissed from the Mitsubishi board in early 2019, Masuko was the last man standing. Masuko began paving the way for a new generation of leadership with the appointment of Kato as CEO in June 2019.

In his last year at the helm, Masuko was preoccupied with soothing the turmoil at the Renault Nissan alliance and trying to reposition Mitsubishi, again, for a more profitable future.

In a direct repudiation of the rapid global expansion pursued by Mitsubishi under Ghosn, Masuko coined a new strategy called Small But Beautiful.

Mitsubishi would focus on the Southeast Asian market where it is strong, and scale back operations in other markets where it is weak. In Europe, for example, Mitsubishi will freeze deployment of new vehicles as step toward leaving the market.

As Masuko steps down, the automaker he led for more than a decade is poised for its second-straight year of losses, as already-plunging sales are exacerbated by the COVID-19 pandemic.