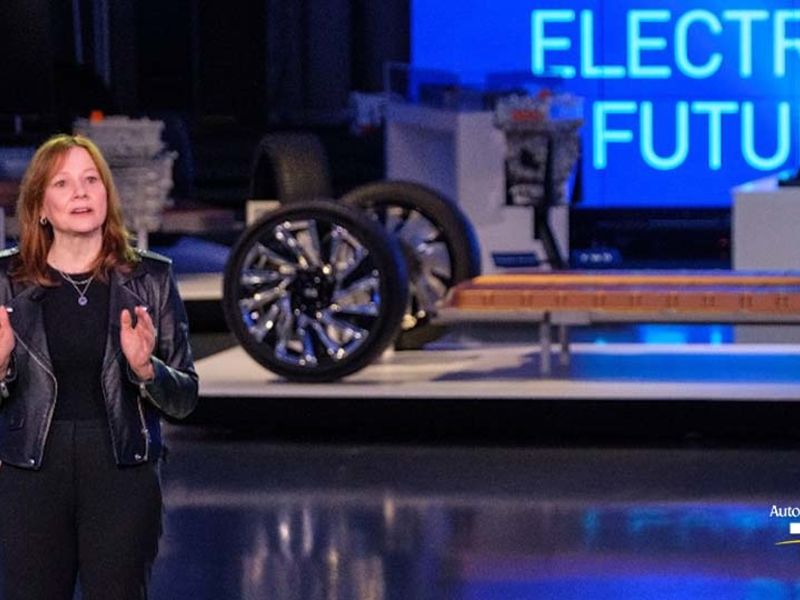 DETROIT — General Motors is pondering a provocative move based on a predicament it has faced for years: Pure plays on electric vehicles are all the rage, while old-school auto manufacturing can’t get any love.

The idea — to spin off GM’s electric-vehicle operations as a standalone entity — was raised by analysts with CEO Mary Barra during the automaker’s earnings call last week. It’s no wonder she voiced openness to the concept. People familiar with the matter say it was floated internally in 2018.

GM now is war-gaming the idea as the company ponders different ways to get credit for its EV plans, though a spinoff isn’t actively being prepared, said the people, who asked not to be identified discussing internal deliberations. Barra was publicly asked about it in light of Tesla Inc.’s soaring valuation and the easy access to capital that unproven EV startups such as Nikola Corp. have pulled off by merging with blank-check companies.

“Investors are telling us every day that they are willing to invest in electric vehicles,” said Emmanuel Rosner, the Deutsche Bank analyst who asked Barra about the idea of a spinoff on July 29. “But they are doing it with electric-vehicle companies, not legacy companies.”

A GM spokesman declined to comment beyond referring to the remarks Barra made during the carmaker’s earnings call.

“We are open to looking at and evaluate anything that we think is going to drive long-term shareholder value,” she said, adding that “nothing is off the table.”

Investors have poured into Tesla shares this year, bidding up its market capitalization to as high as $304.8 billion — more than eight times what GM is worth. Nikola, which isn’t expecting any meaningful revenue until next year, had a higher valuation than Ford Motor Co. in June and early July, athough its stock price has settled back down.

Aspiring EV makers are now trying to replicate Nikola’s strategy to combine with a special-purpose acquisition company and publicly list their shares. They include Fisker Inc., whose founder failed to get his first EV venture off the ground, and Lordstown Motors Corp., which is making a long-shot bid to salvage an Ohio plant that GM closed last year. None of the companies have sold a single vehicle.

The view within GM is that the startups attracting billions of dollars of investment have a fraction of the capabilities Barra touted back in February and March.

First, she tried to sell investors on the idea GM had transformed from a car manufacturer to a technology leader that could sustain profits even when global auto sales slump. She followed up that pitch with another on a battery system called Ultium that will power EV models for each of the carmaker’s brands starting next year.

While GM was unable to stay in the black during the second quarter, when the coronavirus decimated car production worldwide, its loss was much smaller than anticipated. The company expects to restore profitability in the second half of the year.

But the resilience of GM’s core business hasn’t translated into a higher-priced stock. As of Wednesday, the shares were down 28 percent this year. GM shares on Thursday afternoon gained 1.5 percent to $26.74, well below the $33 price at which the company went public in November 2010.

One way for GM to be better rewarded for its plans to roll out a wide range of EV models could be to spin off at least partial ownership of the operations and get investors to help foot the bill, Rosner said. It has earmarked $20 billion of investment for self-driving and electric vehicles by 2025.

“The biggest motivation in all of this is access to capital,” said Rosner, who rates GM shares a buy. “It’s the willingness of investors to give GM money over time.”

There is a precedent for this. GM acquired autonomous-vehicle company Cruise Automation in 2016 and has since sold minority stakes to SoftBank Vision Fund, Honda Motor Co. and T. Rowe Price Associates Inc., bringing in billions of dollars that have helped fund development and reduced its investment risk. Former GM President Dan Ammann now runs Cruise.

GM’s EV operations include an advanced battery lab that creates proprietary cell chemistry, a partnership with South Korea’s LG Chem Ltd. that just broke ground on a factory in Ohio and two assembly plants in Michigan that are dedicated to making EVs. The Chevrolet Bolt has been in production since 2016, and the automaker will unveil its battery-electric Cadillac Lyriq crossover Thursday evening. Barra has vowed to have at least 20 EVs for sale globally by 2023.

GM hasn’t walled off its EV operations as an entity within the company that reports its own earnings results the way it has with Cruise and its lending unit, GM Financial. A spinoff would take some work in this regard.

And there is risk involved, said Dan Levy, a Credit Suisse analyst with the equivalent of a buy rating on GM shares. Investors could get behind the idea initially, but there is no guarantee they will tolerate losses and routinely back the new company with fresh capital the way they have with Tesla for more than a decade.

The other risk is that investors have shied away from GM shares despite its aggressive plans to build EVs. Spinning off those operations could leave the market even less enthused.

Said Levy: “They will still have a legacy business that the market doesn’t value.”