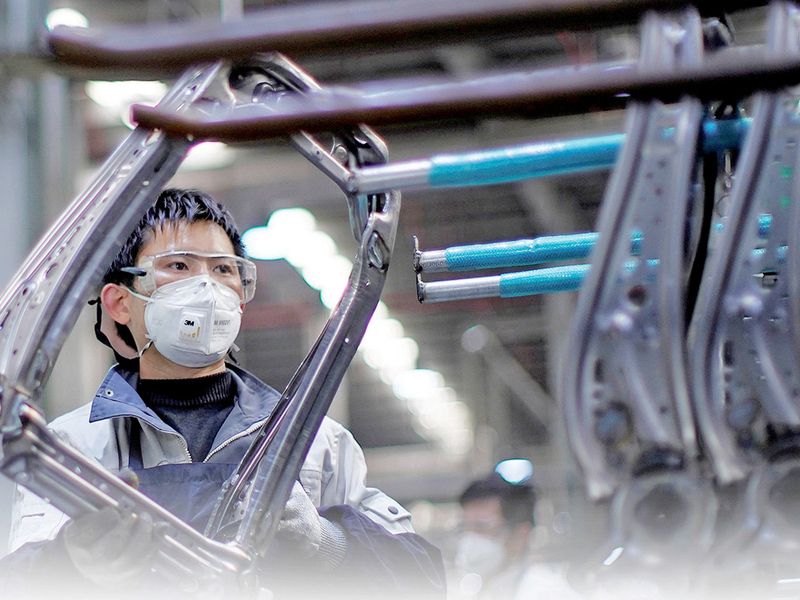 When global supplier Hyundai Mobis said last year it would shutter an overseas manufacturing facility and build a new electric-vehicle components plant in Ulsan, South Korea, it did not mention China.

But as it prepared to invest in Korea, the diversified Hyundai Motor Group-affiliated supplier also slashed production in Beijing.

It was a telling moment for China as a source of global auto parts and materials. It signaled that future industry growth may skip China in favor of other production locations.

While China continues to export billions of dollars worth of vehicle content annually to automaker customers in North America and elsewhere, a shift has occurred over the past two years. The China parts trade has been buffeted by multiple challenges at the same time, and volumes today are lower than in the past.

The trade battle with the Trump administration in Washington has resulted in U.S.-bound Chinese products being hit with punitive tariffs. Rival nations have stepped in to offer viable low-cost manufacturing locations to compete with Chinese factories. A promising new trade agreement among the U.S., Mexico and Canada has made Mexico, in particular, a more attractive potential supply base than in recent years. And the COVID-19 pandemic and its resulting shutdown of plants around the world has made automakers more leery about relying on supply lines across the ocean.

Hyundai Mobis is not alone in its response.

A supplier of exterior parts to Mazda’s vehicle assembly plant in Guanajuato, Mexico, increased production capacity in Mexico by 50 percent to transfer an assembly line from the Chinese province of Jiangsu. Growing logistical challenges with the Chinese parts rung up more than $5 million in extra costs for Mazda, Reuters reported.

Similarly, Minth, a Chinese supplier of trim and exterior parts that sells to several North American automakers and had worldwide sales of $2 billion last year, has established operations in Mexico. The company sold $419 million in parts to customers in North America in 2019.

Another Chinese supplier, Minghua, has operated a plant in Greer, S.C., for the past two years, supplying injection-molded parts for BMW’s nearby U.S. vehicle production.

To support a growing North American customer base, rather than shipping from China, Minghua said it will invest $33.9 million in a factory in Puebla, Mexico, to supply Volkswagen and Audi there, according to the Center for China-Mexico Studies at the National Autonomous University of Mexico.

These capacity shifts are part of a larger industry drive to “reshore” vehicle content to North America, particularly by pulling production out of China.

“Before COVID, you did hear companies talking about near-shoring and reshoring — those aren’t new terms,” said Jennifer Blackhurst, a professor of business analytics at the University of Iowa’s Tippie College of Business, who studies supply chain risk management and shortening supply chains.

“But the fact that COVID shut supply chains down and put people in a panic — that really highlighted the need for reexamining the best way to design and manage the global supply chain.”

China grew rapidly as a source of U.S. vehicle content over the past decade, largely because of its low-cost labor. But rising labor and production costs have enticed companies to look elsewhere. Competing Asian locations have been catching up. Budding manufacturing landscapes in Vietnam, India and Thailand have cut into China’s role.

And now the United States-Mexico-Canada Agreement is offering more incentive for automakers to source within North America. The North American Free Trade Agreement, which the USMCA replaced, required vehicles to contain 62.5 percent North American content to be imported duty-free. The USMCA raises that threshold to 75 percent within three years, with various stipulations. That will put new pressure on automakers to source from U.S., Mexican or Canadian factories.

China is already seeing the effects of the shifts.

Imports of parts from China have been further reduced this year by the widespread disruption caused by the pandemic.

“Redesigning the supply chain is something companies in general are looking at, even if it’s not bringing everything back to the U.S.,” Blackhurst said. “You’re going to see some companies re-looking at where they source from, but it’s not easy to flip a switch and just have that happen.

“We’re going to see more either going to low-cost countries or reshoring to the U.S. because of the risk that a place like China poses for a supply chain,” she added.

Reshoring is a larger trend in U.S. manufacturing, beyond automotive.

U.S. imports of all goods from China declined by 17 percent last year, representing a displacement of roughly $90 billion worth of Chinese products, according to the 2020 Reshoring Index from consulting firm Kearney.

At the same time, U.S. manufacturing imports from other Asian countries increased by $31 billion in 2019 — almost half of which came from Vietnam.

“There are very capable countries — Indonesia, South Korea, other countries — that are capable of producing quality automotive-grade products,” said Doug Mehl, a partner in Kearney’s automotive practice. “It’s better for OEMs to have shorter supply chains so they can react to volume changes or logistics.

“The best case is a shorter supply chain with cost-effective labor,” he added.

A spokesman for General Motors said the automaker expects no major changes in its sourcing strategy as a result of existing challenges with China or challenges brought on by COVID-19.

“China Tier 1 supply exposure for our North American plants is limited to a very small set of specific components,” GM spokesman David Barnas told Automotive News. “Although we continue to assess various ‘what if’ scenarios as a part of our ongoing decision-making processes, we expect no significant change in our current strategies.”

The shift from China has been gradual, said Michael Dunne, CEO of ZoZo Go consultancy, which works with Chinese manufacturers. The change, he said, is “more of a marginal adjustment to minimize the risks of having all your eggs in one basket.”

“The combination of U.S.-China trade tensions and COVID has definitely prompted, inspired, motivated suppliers to say, ‘Let’s be smart about this. There are other markets in Asia where we can and should diversify our portfolio,’ ” Dunne said. “We’ll see a process of rediscovering markets that in their own right are large and dynamic and full of potential.”

But China will continue to offer customers the combination of efficiency and scale that is hard to come by elsewhere, he added.

“It’s a colossus in size and scale,” Dunne said. “Any talk about supply chain movements away from China must take into consideration that most of what’s in place will remain in place, if only to serve that massive home market. That’s not going away — that’s not changing.”

One country that stands to benefit from the U.S. supply chain rethink may be Vietnam. In the first quarter of this year, Vietnam received new foreign investments related to both full-scale vehicle production and components.

A young labor force and lower wages relative to China, along with a more predictable and stable political system compared with other countries in the region, have cast Vietnam as a lower-risk location.

Speaking at a press briefing last month, a senior Trump administration official said it is the U.S. government’s desire to move more commerce to Mexico and Latin America, as opposed to Asia — and that shift is starting to occur, he said.

“This falls into our greater realignment of the … supply chain that we are now trying to bring back home — to realign them from east-to-west to a north-to-south supply chain,” the official said.

“Companies have seen firsthand during the health crisis the benefit of having a north-south chain. They were able to have greater contact with those countries, there was greater ease in working with those countries, as opposed to those that were more exposed on the east-west supply chain,” he said. “In that realignment, Mexico has the most to gain.”

This means that Mexico could gain at least some portion of what has been sourced from China in recent years, said Larry Keyler, global automotive sector leader at accounting and consulting firm RSM US. But he does not expect a mass exodus of auto companies out of the Asian workhorse.

Production moves drive up costs and take months, if not years, to implement, he said.

“When you consider the massive investments the OEMs have made in manufacturing on a global basis, and the amount of continued R&D and automation and robotics that are going on, the thought of ‘I’m just going to shift my supply chain from Asia to Mexico or somewhere else in the world’ doesn’t move as swiftly as you might think,” Keyler said.

Indeed, despite the changing logistics equation of China, not all companies are interested in taking on the expense of moving elsewhere.

Jacques Aschenbroich, CEO of Valeo, the industry’s 10th largest supplier with 2019 sales of $18 billion, told the Aix en Seine economics conference in Paris last month that suppliers likely will relocate only when their customers are ready for them to.

“Our final customers and auto parts clients aren’t ready to pay more if our supply chains were relocated,” Aschenbroich said. “So if neither of them puts a value on the risk, there is no chance that supply chains will be relocated.”

Automakers feed China’s hunger for crossovers
Ford ad calls out Chevy, Jeep, Toyota over California emissions
This Rusted Toyota Camry Has Fender Flares Made From License Plates
Volkswagen Sells Out Of ID.4 1ST For U.S. Within One Day
Polestar Precept will go into production