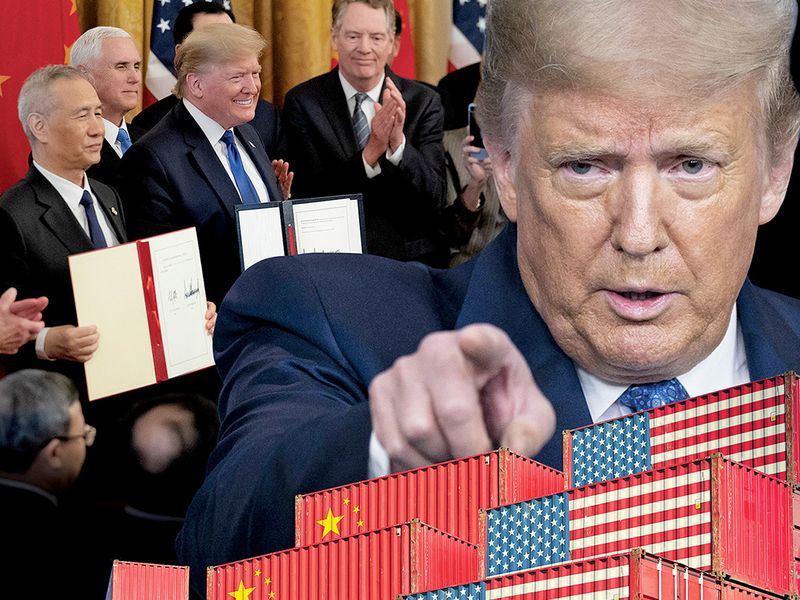 Editor’s note: An earlier version of this story mischaracterized the ideology of the bipartisan Coalition for a Prosperous America.

President Donald Trump, true to his “America First” promise in the 2016 campaign, has confronted China over its trade practices, treatment of intellectual property and alleged currency manipulation. His tenure has been marked by a two-year trade war with escalating tit-for-tat tariffs, followed by a compromise with Beijing — and a resumption of tensions over matters political and pandemic.

As this year’s election season ramps up, the stakes are high for an auto industry in turmoil as it faces the COVID-19 pandemic and ensuing recession while also untangling a new North America trade arrangement.

While China remains a potentially attractive place to sell vehicles or source parts, companies must make major investments knowing that Washington or Beijing may quickly ruin their plans.

“As companies try to figure out their global supply chains, especially in the COVID-19 era, there is a lot of uncertainty about what the tariff system is going to look like — not only under the Trump administration, but also if there is a change in administration,” said Charles Moore, a managing director for consulting firm Alvarez & Marsal’s North American restructuring division. “It just really challenges suppliers and OEMs to be making longer-term decisions with so much in flux.”

The first phase of a U.S.-China trade agreement inked in mid-January, intended to roll back some tariffs and boost Chinese purchases of U.S. products, briefly stabilized the relationship, trade policy experts say. But extra purchases have fallen short, and Trump blames China for the coronavirus pandemic. And last week, tensions heightened as Washington ordered the closure of China’s consulate in Houston, alleging economic espionage after people were filmed burning papers at night. China, calling the order an “unjustified act,” retaliated by ordering the closure of the U.S. consulate in Chengdu.

China’s entry into the World Trade Organization in 2001 represented a “big bet” that the country would gradually open up, reduce tariffs, become more democratic and make market access easier, said Michael Dunne, CEO of ZoZo Go consultancy and an expert on U.S.-China auto dealings. But to get there, China would be given “enormous, unfettered access” to the U.S., he said.

As China’s economic might and ambitions grew — it’s now the world’s largest auto market, and President Xi Jinping wants China to dominate in electric vehicle technology — Trump demanded a reality check on how that bet was paying off.

“Has China made tangible strides toward liberalizing its economy, opening up, making it more accessible, making trade freer — or not? On so many fronts, they came to understand that actually, despite many promises, China had not moved much,” Dunne said.

Trump said he would no longer let the U.S. be taken advantage of by its trade partners. China was particularly vexing to him, as well as to many across party lines. He blamed China for the trade deficit, which in 2016 was more than $346 billion, and the loss of manufacturing jobs. In 2016, then-candidate Trump called China’s policies “the greatest theft in the history of the world.”

Trump has been a strong proponent of tariffs to prompt the reworking of trade arrangements, a sentiment frequently expressed in speeches and on Twitter. In 2018, he imposed washing machine and solar panel tariffs that went into effect in February. The following month, he imposed a 25 percent tariff on steel imports and a 10 percent tariff on aluminum on all but a few select countries, directly affecting the auto industry.

That April, China retaliated with tariffs on $3 billion worth of U.S. products. After talks between the U.S. and China that spring, the U.S. on July 6 imposed a 25 percent China-specific tariff on 284 products, including iron and steel. China met it immediately with a retaliatory 25 percent duty on 545 U.S. goods, including automobiles, which already faced a 25 percent tariff.

Automakers that export vehicles from the U.S. to China, particularly luxury brands BMW and Mercedes-Benz, found themselves in a vulnerable position. Bernhard Kuhnt, CEO of BMW of North America, told Automotive News in April 2019 that “the biggest headwind, without any question, is uncertainty about what’s going to happen with the tariffs.”

The nations called a truce in December 2018, with China agreeing to temporarily remove its additional duties on vehicles and parts. However, tensions rose, and more tariffs were threatened and issued throughout 2019. But in December, following multiple rounds of talks, the two countries announced a phase one deal that cut some U.S. tariffs on Chinese goods in exchange for Chinese pledges to purchase more of American farm, energy and manufactured goods and address some U.S. complaints about intellectual property practices.

With additional uncertainty caused by the coronavirus pandemic, it’s difficult to measure the trade war’s direct impact on the auto industry, Dunne said, but it’s clear the Detroit 3 have faced a declining auto market in China after spending billions to localize vehicle production.

“If you look at the performance of the Detroit 3 in China, they had their peak years in 2016 and 2017. Since then, it’s been a downward spiral,” he said. “GM sold a record 4 million vehicles at that time. This year, they’ll probably roll in at about 2.6 million — a huge reversal after so many years of growth and profits.”

As demand in China fell below the country’s automaking capacity, Chinese factories were poised to supply the U.S. with Ford Focus sedans and Volvo XC60 crossovers.

But the trade war stymied any large-scale effort to import autos made in China to the U.S., said Brad Setser, the Steven A. Tananbaum senior fellow for international economics at the Council on Foreign Relations, a non-partisan think tank.

China has, however, made some concessions to address U.S. concerns about mandatory joint ventures by loosening corporate ownership rules, benefiting Tesla Inc., which built a factory near Shanghai that started production in October.

“The tariffs and the other measures that [Trump has] taken show that he recognizes that we can reverse the predatory nature of this relationship, and we can stand up and say the U.S. needs to have a strong manufacturing sector,” said Jeff Ferry, chief economist at the bipartisan Coalition for a Prosperous America. “It needs to be self-reliant, and we need to stop allowing China to destroy our industrial base.”

The COVID-19 pandemic and Trump’s fight-first rhetoric cloud the outlook on the U.S.-China trade front.

During a campaign rally in June, the president referred to the coronavirus as the “kung flu,” and at a White House press conference this month, he targeted presumptive Democratic presidential nominee Joe Biden’s career as a “gift to the Chinese Communist Party.”

Trade policy experts agree China is not on track to meet the additional $200 billion of U.S. product purchases over the next two years, as outlined in the phase one agreement. And on July 10, Trump said he was not currently thinking about negotiating a phase two trade deal — intended to address other key issues such as subsidies, cybersecurity and digital trade — as relations between Washington and Beijing sour over handling of the pandemic and other issues.

U.S. Rep. Debbie Dingell, a Michigan Democrat and member of the House Congressional Automotive Caucus, agrees with Trump that China needed to be confronted over trade, but she says his style has been ineffective. “The way he has handled China has been irresponsible,” she told Automotive News. “It’s emotional. It’s not consistent.”

Republican U.S. Rep. Mike Kelly, an auto dealer in Pennsylvania, said the focus should not be so much on what the president has said, but on his policy.

“He spoke very clearly: His message was, ‘America first,’ ” said Kelly, co-chairman of the Automotive Caucus.

The November election could lead to a shift in toughness and tone with China, but Scott McCandless, a principal in the tax policy services group for PwC’s Washington National Tax Services, cautions that, for the time being, “tariffs are here to stay.”

There will continue to be friction with China no matter who wins the election, according to Jeffrey Schott, a senior fellow at the Peterson Institute for International Economics.

Trump currently trails Biden, the former vice president, in many polls, but he also trailed Hillary Clinton as Election Day 2016 approached, so the outcome is far from certain.

Biden was critical of the phase one deal, saying in February that it “won’t actually resolve the real issues at the heart of the dispute, including industrial subsidies, support for state-owned enterprises, cybertheft and other predatory practices in trade and technology.”

More recently, he has said he would sanction China over its imposition of a new national security law in Hong Kong.

A Biden administration would probably work more closely with international allies to develop a coordinated response to China, Schott said, rather than what the Trump administration has done, which is “go it alone.”

Bloomberg and Reuters contributed to this report.

US: BEV Market Nearly Doubled Through April 2021
Aston Martin sues car dealer in cash wrangle
2022 Jeep Grand Wagoneer Gets MPG—Just Not Many
2022 Kia K9 In The Flesh – Here’s What We’re Missing In The States
Skoda’s Next EV Will Be A Small Crossover, Report Says