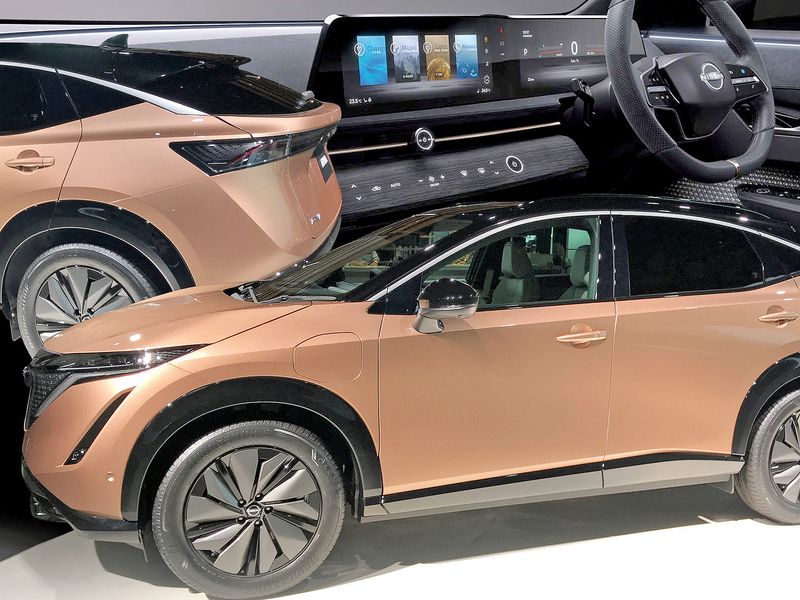 TOKYO — Embattled Nissan Motor Co., seeking to amp up its electric vehicle street cred, says the company’s long-awaited Ariya crossover will be a new Tesla-fighting machine that packs “sports car-level power” and a 379-mile range by Japanese measurements — or an estimated 300 miles by U.S. measurements.

The high-end, all-wheel-drive version of the new, all-electric vehicle will deliver torque approaching that of Nissan’s vaunted GT-R sports car, with a 0 to 60 mph time of about 5.1 seconds. It opens a new era of electrification at Nissan that is as much about performance as zero emissions.

The vehicle goes on sale in mid-2021 in Japan but will not reach the U.S. market until late next year, showcasing the brand’s newest technologies and design directions. It will sport Nissan’s latest hands-off autonomous driving system, while its dedicated EV platform allows for an ultra-roomy cabin with a flat floor.

The Ariya bests Nissan’s Leaf EV hatchback in almost every way, but the real competition will be the growing ranks of electric crossovers, starting with the Tesla Model Y compact crossover.

Nissan Chief Vehicle Engineer Hikaru Nakajima said his team, which has been working on the vehicle for five years, benchmarked the Model Y, though the goal wasn’t to compete with it on all fronts. Among the Ariya’s advantages, Nakajima said, is more interior space than in the Model Y.

As Nissan’s first EV entry in the key crossover segment, the Ariya is critical to jump-starting the company’s new four-year revival plan. The Ariya will underpin Nissan’s push to sell more than 1 million electrified vehicles a year by March 31, 2024.

“For Nissan, the Ariya is not just another new model. It is a model that opens a new chapter in the history of Nissan,” Uchida said.

To herald the arrival, Nissan also unveiled a new brand logo. The revamped emblem is a more two-dimensional, minimalistic reimagining of the current stylized sun badge and will be used on upcoming vehicles as they are introduced or freshened.

The Ariya will be offered in two-wheel-drive and all-wheel-drive layouts and have two battery options.

Powertrain output will range from 160 kilowatts with a two-wheel, 65-kWh battery configuration, to 290 kilowatts for the awd Ariya with a 90-kWh battery.

The awd versions use Nissan’s new e-4ORCE powertrain, which has two motors — one on the front axle, one on the rear.

By contrast, Nissan’s Leaf Plus has a 62-kWh battery with 250 pound-feet of torque.

Nissan hasn’t detailed plans for deploying the 2.0 version to other markets. But Nakajima said the U.S. version is expected to debut with the technology. Nissan has announced plans to introduce ProPilot systems in more than 20 models in 20 markets worldwide as part of its four-year midterm business plan.

The Ariya also will get Nissan’s ProPilot Remote Park auto-parking system and the company e-Pedal feature, which combines accelerator and brake functions into one pedal, as in a go-cart.

A new interface technology will enable people to use natural speech to adjust the Ariya’s settings, and the vehicle’s software system will be upgraded through over-the-air updates.

The Ariya also debuts a new design language inside and out.

Inside, engineers cleared away the center tunnel by pushing the air conditioning and heating unit into the front motor compartment. The front row now has a roomy, walk-through feel.

“The actual [design] language you see in the Ariya is one for the EV family,” said Nissan global design chief Alfonso Albaisa. The planned electrified models in Nissan’s midterm plan will share this type of DNA, he added.

Naoto Okamura contributed to this report.