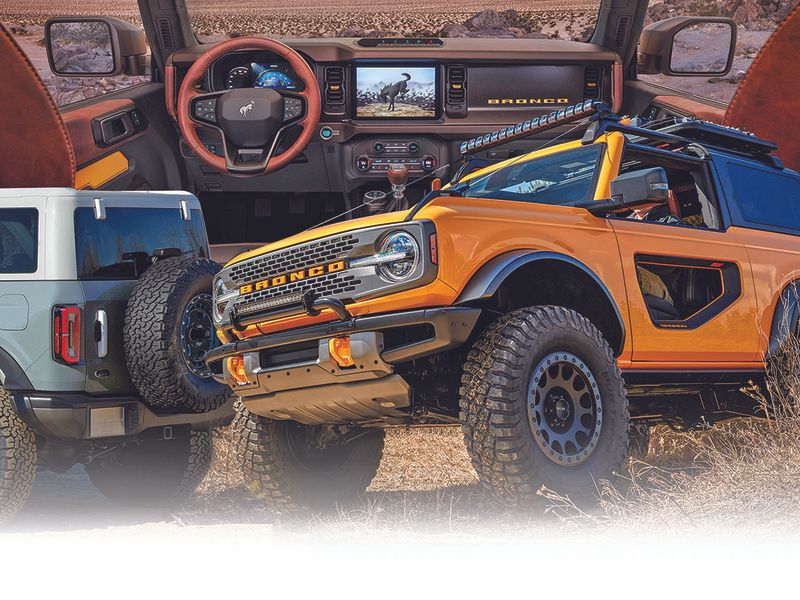 Tarwacki, as the store’s general manager, had a front-row seat while Jeep posted record sales and dominated the off-road market with a diverse customer base.

“It was a little bit of everything — the loyal buyer who had multiple Wranglers but also younger people and families who just wanted a cool ride,” he said. “Jeep’s done a fantastic job building what they have.”

Now he’s trying to take a piece of it.

“There’s a loyal, lifetime Wrangler enthusiast that we might not be able to pull away,” he told Automotive News. “However, I think there are a lot of people who looked at it as the only option they had, and we should really be able to capitalize with them.”

Ford Motor Co. views the Bronco as a key piece of its long-brewing turnaround under CEO Jim Hackett. Designers spent five years — a stretch in which Jeep sold more than a million Wranglers in the U.S. — developing an SUV that would both pay homage to its rich heritage and show off the latest technologies.

Many features were added to one-up Jeep, such as the 35-inch tires included in the Bronco’s Sasquatch package that are 2 inches bigger than the largest available on the Wrangler. Unlike the Wrangler, the Bronco’s removable doors can be stored in the back, and the open-air roof isn’t bisected by a cross bar.

And if the message wasn’t clear enough, COO Jim Farley bluntly told investors this year the Bronco would be “a much superior product” to the Wrangler.

After years of buildup, the Bronco’s debut was well-received.

Celebrities and athletes tweeted glowing remarks about the SUV after it was unveiled virtually on ABC and other Disney-owned TV networks. The website taking $100 deposits crashed under what Ford called a “stampede of traffic,” and reservations for the Bronco First Edition — limited to 3,500 copies — filled up in less than a day.

“From both a technical analysis and an emotional reaction perspective, this thing looks like it will have a very good shot at converting existing Jeep owners into Bronco buyers and will certainly convert non-Jeep general enthusiasts of off-roading,” automotive analyst Karl Brauer said in an interview. “But having a backlog of interested parties before the vehicle arrives at dealerships isn’t that tough to do. The winners are the ones that have a solid amount of demand six months, 12 months after the cars are available.”

The key to the Bronco’s appeal, executives say, is its versatility.

In addition to the two- and four-door Bronco SUV, Ford revealed the smaller Bronco Sport, a less extreme crossover meant to appeal to customers who like the Bronco’s looks but may not want to slog through muddy trails.

Ford designed both vehicles to be highly customizable. “With one hour and a wrench,” Chief Designer Paul Wraith said, customers can essentially strip the Bronco bare and upgrade a number of components.

One area without as much choice as some enthusiasts would like, however, is the powertrain. The Bronco comes with a 2.3-liter four-cylinder EcoBoost engine standard, or buyers can upgrade to a 2.7-liter V-6. A manual transmission is available only with the base engine. Some off-roading purists hoped Ford would have included a V-8.

“If you’re looking at a potential Achilles’ heel in the Bronco’s launch plan, that’s what it is,” Brauer said.

Jeep appears more than happy to exploit that weakness.

Hours before the Bronco made its debut, Jeep revealed a Wrangler concept powered by a Hemi V-8. In a not-so-subtle ad accompanying the reveal, the 450-hp concept tears through the countryside, the growl of its engine scaring off a herd of wild broncos.

While it’s unclear whether Jeep will build the vehicle, Brauer said it’s likely the first of many counterpunches coming before the first Broncos reach dealership lots in the spring.

“Jeep still has about 12 months to respond,” Brauer said. “I think they should be worried, but FCA isn’t known for resting on its laurels when it’s challenged. Whether it’s Ram or muscle cars, when someone messes with them owning the specs in a given segment, they tend to react fairly quickly.”