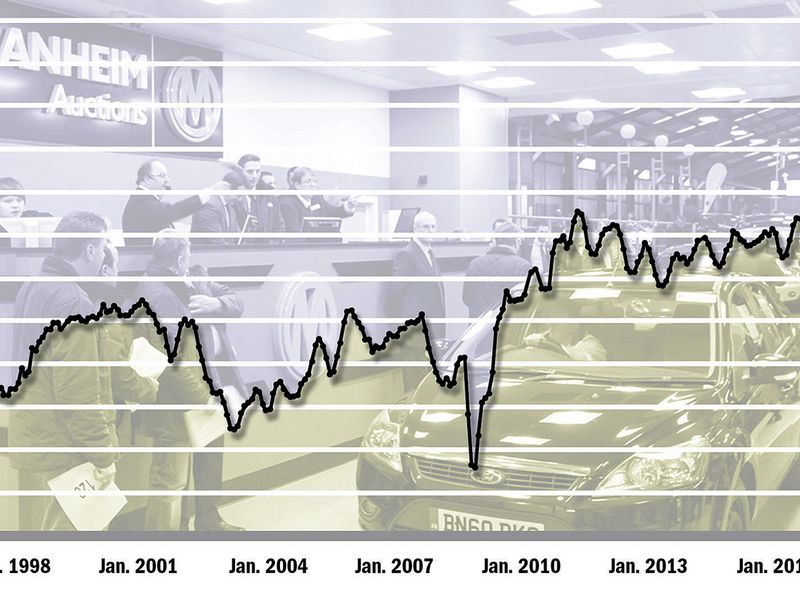 As new-vehicle inventory at dealerships wanes across the U.S., more shoppers are turning to used cars, leading to record-high auction prices as dealers scramble to replenish their stocks.

For the wholesale market, it marks a quick snap back from a steep decline in the spring. And while dealers now have no problem unloading vehicles at auction, obtaining used vehicles they can sell is now trickier — and much pricier. Cox Automotive reported last week that prices for vehicles sold at its Manheim auction unit in June were the highest in the 25 years it’s been tracking the data.

Scott Gruwell, owner-partner of Courtesy Automotive Group in Arizona, attributed the rise to shoppers returning to the market in May and June after being mostly sidelined by the coronavirus pandemic in April. That created higher demand with dwindling supply.

“For a while it wasn’t that bad, but towards the back half of June and the first days of July, it’s been extremely difficult,” Gruwell said. “The market supply is pretty tight.”

Industry observers point to a few reasons for the lopsided recovery. One, new-vehicle inventory is in short supply because of plant closures this spring and, in the case of General Motors, a UAW strike last fall. Second, during times of economic turmoil, shoppers often gravitate toward more affordable used vehicles. Reduced incentives over the past two months on new vehicles have only added to this phenomenon.

Still, there have been only modest increases in retail used prices, according to J.D. Power. For the week ended July 5, retail used prices rose 0.5 percent from the previous week and were 2 percent above pre-virus levels.

But industrywide wholesale auction volume for that same period was 17 percent above J.D. Power’s pre-virus forecast. Wholesale auction prices were up 0.9 percent for the week ended July 5 compared with the prior week, the company said in a report last week. That marked 11 straight weeks of increasing prices, and it occurred during a typically slower period that included the Fourth of July holiday.

During that 11-week period ended July 5, wholesale auction prices rose 24 percent and stood 8 percent higher than at the beginning of March, J.D. Power said. The company said it expects wholesale prices to remain relatively strong in the near term.

Wholesale used-vehicle values on Cox Automotive’s Manheim Used Vehicle Value Index rose 9 percent in June vs. May. The index, a measure of price change for used vehicles sold at Manheim auctions in the U.S., hit a record high for June and posted a 6 percent year-over-year increase. It marks a wild swing from the index’s “historic decline” in April of 11.4 percent, Cox Automotive Chief Economist Jonathan Smoke said last week.

Cox estimated that total used-vehicle volume, wholesale and retail, dropped 12 percent year over year in June. That drop is in part related to the tighter inventory.

Courtesy Automotive Group’s Gruwell said he watched as wholesale values “dropped like a rock” in March and April. Courtesy had anticipated that struggling rental-car companies would unload inventory.

So far, that hasn’t happened. Both the wholesale and retail used-vehicle markets have been relatively strong since the beginning of May.

“There’s really two large factories for used cars, other than trade-ins and street buys,” Gruwell said, pointing to cars coming out of rental fleets and lease returns. “The rental-car companies held tight,” he said, adding that many lease returns have been delayed, too.

Asbury Automotive Group Inc. CEO David Hult also recalled that rapid drop early in the pandemic, calling it unprecedented in his 34 years in the automotive business. Asbury opted not to shed used inventory at those fire-sale prices, as some other retailers did, Hult told investors in a business update Tuesday, July 7.

“We sat on it because I just knew the valuations weren’t real,” he said.

Asbury reported last week that its used-vehicle volume rose 1.5 percent in June compared with a year ago as gross profit per used vehicle soared 27 percent.

“Overpaying for inventory and creating lower margins isn’t going to benefit anyone,” Hult said. “So we’re thoughtfully looking at this every day and going store by store, being strategic as to how we can acquire inventory.”

Even so, an uncertain road lies ahead. “By no means is the crystal ball clear, especially for the next three to six months,” said Cox Automotive’s Smoke.

Much will depend on the pandemic’s trajectory. Cases of the virus are surging in parts of the U.S. less affected during the outbreak’s early weeks.

Cox’s latest forecast calls for wholesale used-vehicle values to peak this month, followed by a slight decline later this summer and into fall, Smoke said. After stabilizing near year-end, values are likely to rise to new highs next spring, he said.

Gruwell said he’s adapting to the fluctuations. “It’s a pretty fluid market,” he said. “You just got to pay attention to what’s going on.”

Jackie Charniga contributed to this report.