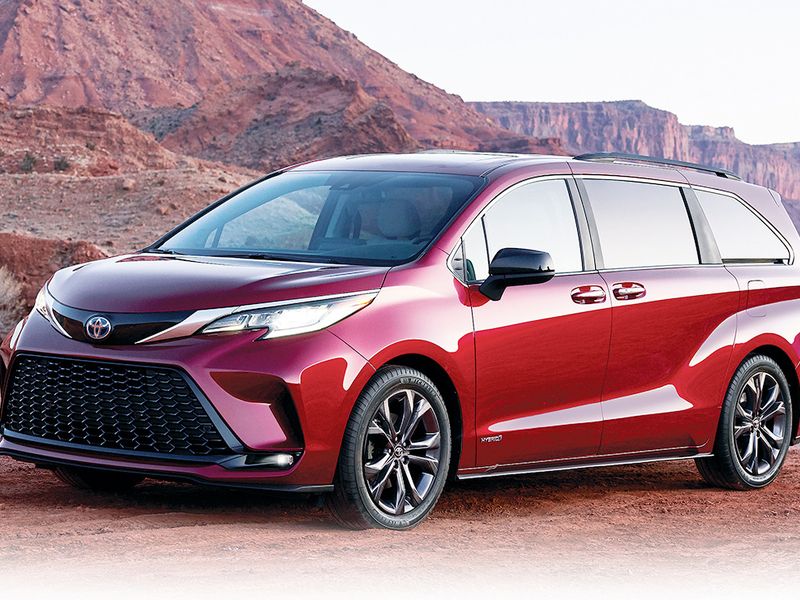 The minivan market is shrinking, but it isn’t a lost cause.

Chrysler, Toyota, Honda and Kia are doing battle for the remaining consumers still drawn to the segment’s practicality even as three-row crossovers eat into the base of would-be minivan buyers. Conquest opportunities may be slim, but brands are working to stand out with bolder styling, hybrid engines and all-wheel-drive capability.

Those still loyal to minivans are seeing automakers raise the bar as the minivan segment evolves.

Toyota said it deliberately avoided a boxy look with the 2021 Sienna, which will be offered only as a hybrid. Chrysler, on the other hand, believes it can bring in some of the 700,000 people who switched from passenger cars to utility vehicles last year with its sleekly designed Pacifica, which is gaining the option of all-wheel drive and the next-generation Uconnect system this year.

Meanwhile, Kia gave a preview of the next-generation Sedona when it unveiled the global Carnival, which has the styling of a crossover but the sliding doors of a minivan.

Tim Kuniskis, head of passenger cars for Fiat Chrysler Automobiles North America, said during a media preview of the 2021 Pacifica that car buyers switched to utility vehicles to get more space, size and capability. Those factors, he said, give consumers “a perception of more safety.”

The 2021 Pacifica was freshened with a restyled grille to go along with a new LED taillamp spanning the width of the vehicle, similar to the Dodge Durango and Charger.

Chrysler hasn’t offered an awd minivan since 2004. The brand also added the Voyager last year as a value play and effectively a substitute for the Dodge Grand Caravan, which was the top-selling minivan in 2019 and will be discontinued at the end of the current model year.

Matt DeLorenzo, managing editor of Kelley Blue Book, said minivans will never be the big sellers they were in the 1980s and ’90s, but their practicality means “there will be buyers who need them more than they want them.”

“There is a definite niche to be served by a few players,” DeLorenzo said in an email.

Sam Fiorani, vice president of global vehicle forecasting for AutoForecast Solutions and owner of three minivans over the years, said the vehicles haven’t been able to overcome a negative image, even as automakers update them with sportier looks.

Consumers would rather drive “cooler” crossovers, he said, such as the Ford Explorer, Mazda CX-9 or Chevrolet Traverse.

Fiorani, who uses his 2014 Chrysler Town & Country to haul his son’s go-karts with ease, said it’s a sad phenomenon because minivans are “arguably the most efficient packaging of a vehicle.”

There’s still loyalty in the minivan segment for automakers to tap into. A KBB.com study last year showed that 46 percent of minivan owners said they planned to replace one minivan with another.

Alison Anziska, vice president of marketing and analytics at Edmunds, has owned three Honda Odysseys over the past decade. She has five children and said the Odyssey’s comfortable seating and ample cargo space make it great for road trips.

But the Sienna’s hybrid powertrain is appealing, she said, so whether she remains with Honda will depend on how the Odyssey evolves. Her youngest child is 4, so she plans to stick with minivans for a while but sees herself moving on at some point.

“I don’t see the minivan as a permanent car decision,” Anziska told Automotive News. “I think there comes a point in time when that level of practicality is not needed on a daily basis and you can switch back to a nice luxury SUV for the same price.

“But I still consider myself [in] those prime years. You’re in the minivan market for, like, 15 years, and then you’re ready to move on when you’re not lugging all that sports equipment and children’s backpacks and stuff.”

The fact that the Pacifica has added an awd option on its gasoline version, DeLorenzo said, shows this part of the segment is heating up.

“As far as hybrids go, Sienna does represent a threat for buyers looking for alternative powertrains, but the Pacifica’s trump card is its plug-in capability and the fact that it’s eligible for the federal tax credit for electric vehicles,” DeLorenzo said. “Chrysler is hoping that the Grand Caravan buyers migrate to the Voyager and perhaps more of [the] Voyager production will pick up the rental-car business owned by Grand Caravan.”