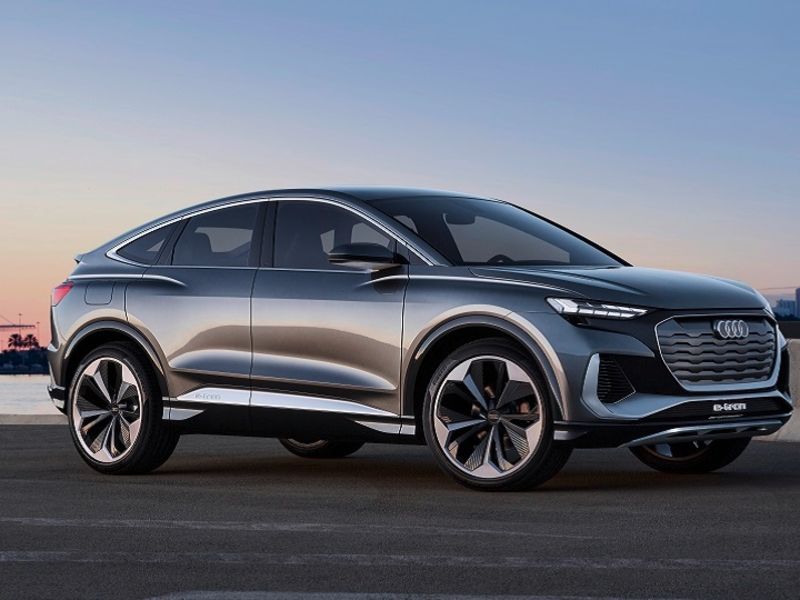 FRANKFURT — Audi will add the Q4 Sportback e-tron, a sportier-looking version of the upcoming Q4 e-tron compact electric SUV, to its expanding range of battery-powered cars.

Both models will go on sale by next summer in the automaker’s global markets as entry-level full-electric cars.

Audi unveiled pictures and details of the Q4 Sportback e-tron on Tuesday, saying the coupe-styled, four-door car will be positioned in the upper third of the compact segment.

The Q4 Sportback e-tron has a more dynamic look than the Q4 e-tron with a steeply sloping roof and a prominent spoiler that lends it the silhouette of a fastback, despite its raised seating position and higher riding height.

This gives the Q4 Sportback a small aerodynamic edge over its sibling, according to Audi Chief Designer Marc Lichte.

“This is the sportiest SUV coupe we have ever done,” he said. “This spoiler is reduces the drag coefficient and that means longer driving range.”

The Q4 Sportback e-tron and Q4 e-tron are “identical twins” technically speaking, Audi said. They have a range of more than 450 km (280 miles) measured under Europe’s WLTP testing standard.

The Q4 e-trons are based on Volkswagen Group’s MEB electric vehicle platform that also underpins the VW ID3 compact electric hatchback, which goes on sale in Europe in September, and the upcoming VW ID4 crossover.

“We are using the group’s full power and technical expertise for the new electric Audi and this makes the Q4 e-tron models a cornerstone in our electrification strategy,” said Markus Duesmann, CEO of Audi since April, during a video presentation to journalists.

The two Q4 e-trons will allow customers to choose from Audi’s most popular body styles – the SUV and the Sportback, Duesmann said.

They are powered by the same 82 kilowatt hour lithium ion battery and two electric motors that deliver a combined output of 225 kilowatts (302 hp).

Roughly 80 percent of the range can be replenished in as little as a half hour when charged at 125 kW.

Thanks to the 510 kg (1,124 lbs) weight of the battery, the vehicle has a center of gravity comparable to a lower riding sedan.

Handling is given an additional boost by its near perfect 50:50 weight distribution over the two axles and an independent multilink rear suspension.

The Q4 Sportback e-tron’s interior has Audi’s virtual cockpit as well as an augmented reality head-up display that can project directions directly onto the street.

Audi aims to offer more than 20 full-electric models in its key markets by 2025. Its current full-electric cars are the e-tron and the e-tron Sportback. The e-tron GT sports sedan, a Tesla Model S rival based on the Porsche Taycan, is due by next year.