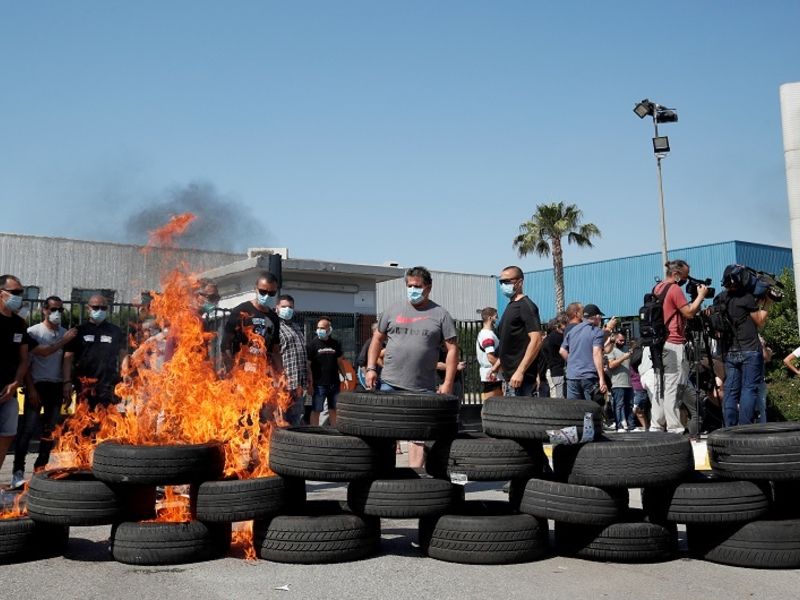 MADRID — Patricia Notario’s life started unraveling when she first heard rumors that Nissan would shutter its car factories in Barcelona.

It was during Spain’s state of emergency to contain the coronavirus, and the 36-year-old and her partner, also a Nissan employee, were confined to their home like millions of others.

The couple had put all their savings into a new apartment a few months earlier and were awaiting a decision about their mortgage. After the automaker — which has been building vehicles at the site since before Notario was born — confirmed the news in late May, the fallout was hard.

The bank rejected the couple’s loan application, the owner balked at returning their 40,000-euro ($45,000) down payment, and the temporary housing the couple had rented until they could move into their new home turned into a type of limbo.

“Our future is black,” said Notario, staring at a blank TV screen.

She’s not alone. About 25,000 workers in the Spanish industrial hub have their livelihoods on the line. It’s a scene that could play out in car towns around the world as the coronavirus crisis accelerates a structural shift in the overcrowded, fast-changing auto industry.

Nissan’s decision to shut down its three plants in the scrubby hills outside Barcelona is part of a broader reorganization with alliance partners Renault and Mitsubishi Motors, which involves cutting global production by 20 percent. The move is linked to the broader strains facing the sector as the era of the combustion engine gradually draws to a close.

“The transformation of the auto industry is unstoppable, it’s a new industrial revolution, and the only alternative is to adapt or die,” said Tomas Diaz, a Nissan worker and an official with the Comissions Obreres union in the Catalonia region.

“Today is Nissan, but tomorrow it can be any other plant.”

Car sales are plunging, and a recovery is expected to be long and slow. The prospects for traditional vehicles are particularly gloomy.

Major economies, accounting for 13 percent of global car deliveries, have committed to phase out diesel and gasoline engines, some as early as 2025.

An 87 percent decline in battery prices in the past decade and a green push by the European Union will drive electric car sales up in Europe from just over half a million last year to 2 million in 2025, Bloomberg NEF predicts.

Car plants, long a provider of middle-class incomes for blue-collar workers, are being separated into two classes: those with a future in the electric world and those that will be sidelined sooner or later.

If nothing changes, Notario, her partner and Spain’s other 600,000 auto workers will be left out of the green jobs revolution. While some electric models are assembled in Europe’s second-biggest auto producer, all of the region’s electric-car supply chain is concentrated in northern Europe and Asia, where the batteries are developed.

“You could see the factory had less production,” said Notario, as her 11-year-old son plays video games in the next room. “We never had the feeling the plant would close.”

Workers have been on indefinite strike since early May. They gather for weekly updates outside Nissan’s Montcada i Reixac plant — a stamping facility that supplies nearby factories, effectively halting all the company’s operations in the area.

Signs of anger are everywhere. A tower with the Nissan logo is stained with red paint. Along the factory fence, workers hung uniforms smeared with slogans such as “our virus is the closure” and “worker for sale.”

A protest camp has been dubbed “La Resistance,” and the name is emblazoned on a blue trailer truck nearby. A small cafe serves snacks and sandwiches to raise money for the strike fund. Picket lines are manned around the clock to prevent supplies and machinery moving out.

On a rainy day in June, union leaders climbed a precarious set of metallic stairs to address about 400 people. Four assemblies had been called that day to keep the crowd small and comply with social-distancing requirements. Workers wearing blue surgical masks listened in silence.

Officials tried to rally the group by questioning Nissan’s argument that the plant is no longer competitive. They sought to sow hope by asserting that a closure could be avoided if Renault takes over. If all else fails, they urged the government to make it harder for Nissan to fire people.

“We did not find any viable solution or alternative, due to overall capacity globally and regionally,” Gianluca de Ficchy, chairman of Nissan Europe, said in a statement to Bloomberg, adding that the process is moving ahead.

And Renault, like most other automakers, has its own issues. The French company, which has three sites in Spain, is wrestling with the politically tricky task of lowering capacity and cutting jobs at home. Vehicle assembly could be phased out at some factories like Flins near Paris, while two other sites could be closed or sold, sparking the ire of unions and intense political scrutiny.

Montcada i Reixac is north of Barcelona, far from the sea and the vibrant Catalan capital. Squeezed between highways and pierced by a cement factory, industry is part of the town’s makeup — about 200 cargo and passenger trains, rumble through every day. Mayor Laura Campos is following the developments with dismay.

“Hundreds of families from this town have worked in the auto industry, going back generations,” said Campos as she waited patiently at a railway crossing for a train to pass. “A Nissan closure would be a catastrophe of epic dimensions, both economically and socially.”

Much of the town’s industry disappeared during the financial crisis, which hit Spain hard. While the recovery brought in some new employers, many are logistics operations which employ less people and pay lower salaries, leaving many families vulnerable, said Campos.

“We need a full industrial plan, or we will be out of the game in the next five years,” said Josep Maria Vall, head of Catalan Automotive Industry Cluster, a lobby group that represents local suppliers. “We still have our last shot, but if we miss this opportunity, we probably won’t be able to ever recover.”

Spain’s cash-strapped government unveiled a 3.75 billion-euro stimulus program for the car industry earlier in June. About 500 million euros is earmarked for promoting new technologies and retraining workers. The rest will mostly go toward programs to replace older vehicles with new ones, including diesel and gasoline cars.

The indirect boost to local auto plants is only temporary, and a longer-term plan is needed. Barcelona’s Zona Franca industrial site hosts an incubator for 3D-printing startups near another Nissan plant affected by the closure.

The Catalan government is hustling for new investment, but competition is tough, according to Economy Minister Pere Aragones.”We are working to have the maximum number of investments in the electric-car value chain in Catalonia,” he said. “This is a moment of transformation for the whole sector, and we think that with every difficulty comes an opportunity.”

Jordi Fernandez, Notario’s  partner who has started to study for a technical degree, has a worried look on his face after returning from the plant.

“I keep thinking about people finishing school, some will get a university degree and they’ll be fine,” said Fernandez. “But how about people like us — those that will never study at a university, or that can’t afford it? Where are they going to work?”