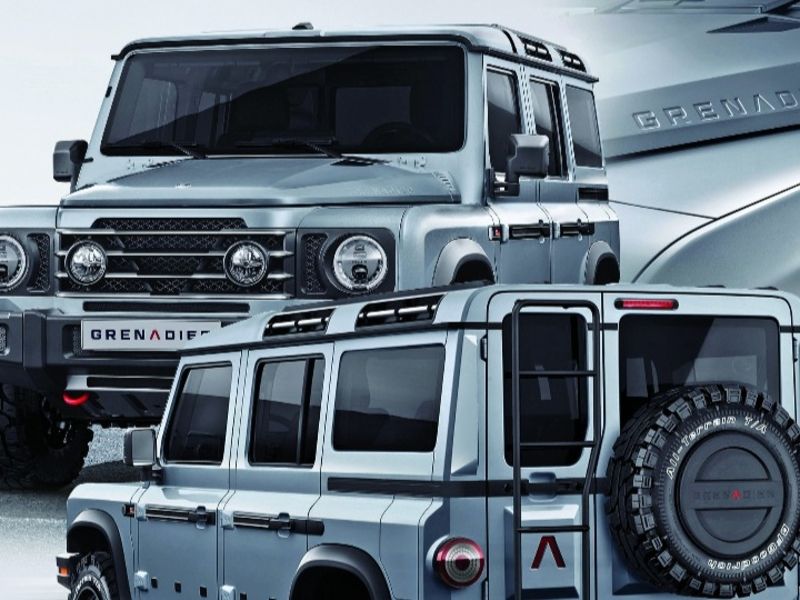 Britain’s Ineos Group, one of the world’s largest chemical companies you’ve likely never heard of, is preparing to enter the auto industry with a new-from-the-wheels-up utilitarian SUV.

It’s a boxy, rugged-looking, midsize four-by-four whose size and shape makes it a near doppelganger for the classic Land Rover Defender 110 wagon that ended production in 2016. And it could land in the U.S. in 2022.

The Grenadier’s perhaps-too-strong resemblance to the iconic Land Rover could be a risky bet.

Jim Ratcliffe, the Richard Branson-esque chairman of Ineos Group, tried to buy the classic Defender’s production tooling from Jaguar Land Rover in 2016 and continue production. When JLR declined, Ratcliffe, one of Britain’s richest men, decided his company would build its own utilitarian SUV aimed it at the same market — adventurers, sportsmen, builders and farmers, a segment Ratcliffe believes Land Rover left in the dust with the 2020 Defender.

The new Defender, which has no carryover parts from the classic model, is just now arriving at U.S. dealers.

It’s far more civilized, refined and advanced than the original agrarian Defender, a vehicle which traces its roots back to 1948.

When JLR learned Ineos was planning to build a vehicle similar to the classic Defender, company lawyers moved to trademark its shape. But last fall, a judge in Britain’s Intellectual Property Office denied JLR’s request, reasoning that the Defender’s shape was not much different from other off-road vehicles. JLR is appealing that decision and has moved to protect the Defender’s shape in other markets.

Unlike some other newcomers to the auto industry, Ratcliffe doesn’t have to worry about raising capital to fund the $1 billion Grenadier project. Ineos last year booked $61 billion in global sales. The company employs 23,000 people in 34 businesses in 183 manufacturing centers in 26 countries. It produces specialty chemicals, petrochemicals and oil products used in thousands of products, such as paint, mobile phones and medicine.

Ineos’ financial heft enabled the company to hire many of the industry’s top suppliers and write whatever checks were needed to fast-track the Grenadier to production. Magna Steyr in Austria is handling the Grenadier’s body engineering. MBTech, a German company partially owned by Daimler, is doing much of the product development work. BMW will provide gasoline and diesel engines. The rugged steel frame comes from the same supplier that builds the Toyota Land Cruiser’s frame, Ineos officials say.

A plant under construction in Bridgend, Wales, gives Ineos access to an experienced work force. A Ford engine plant there is closing this fall after 40 years.

Ineos decided to debut the production-intent model now because it wants to test the vehicles free of camouflage and also create a little buzz among potential customers pining for the old Defender. But showing the final design now might also have a legal angle. If JLR sues, a legal dispute could be settled by the time the Grenadier goes on sale.

JLR has fought to protect its intellectual property. In recent years, it won a lawsuit in China against an automaker that was building a compact SUV virtually indistinguishable from the Range Rover Evoque. JLR also successfully sued Canadian company Bombardier and prevented the use of the Defender name on small, recreational off-road buggy.

The cottage industry catering to the classic 1948-2016 Land Rovers has grown in the four years since classic Defender production ended. Companies in the U.K., U.S. and elsewhere are hauling dilapidated old Land Rovers out of barns and garages. They are rebuilding them with modern components and selling them for six-figure prices. The business is so lucrative that even Jaguar Land Rover’s classic division is restoring and modifying customers’ classic Defenders.

It’s this Defender-mania that the Grenadier is hoping to capitalize on. If all goes according to plan, the Grenadier will start production sometime in 2021 and arrive in the U.S. the following year with two models — an SUV and a stubby short-bed, four-door truck. U.S. distribution plans have not yet been worked out. The thinking is to “land and expand,” said Mark Tennant, Ineos Automotive’s commercial director. That is, the company would start sales, possibly direct to consumers in markets where demand for rugged SUVs is highest.

During a media preview of the 2021 Grenadier, company officials said the vehicle has been designed to be capable, durable and reliable.

They said the Grenadier’s bill of design was inspired by the same requirements that created the original 1940 U.S. Army jeep — the exact vehicle after which Rover Co. patterned the original Land Rover.

“From the earlier discussions about the old Land Rover Defender being retired, [we said] could we do something similar because we believe there is a gap in the market,” said Tennant.

“What we wanted to do is get back to a simpler concept where off-road capability takes precedent. We were really very focused from an early stage making a vehicle that would stand on its own four tires. You look at the vehicle, and you know that’s what it is intended for. There’s a really strong sense of purpose in the design,” he said.

There will be at least one major difference between the Grenadier and the classic Defender — the interior. The Grenadier will have connectivity and screens, and will have a refined, spacious and comfortable interior, says Dirk Heilmann, Ineos Automotive CEO.

Even if the Grenadier comes to market in its current form, it could still face a bumpy ride. It will have to contend with the new crop of tough off-roaders, such as the Ford Bronco, the electric GMC Hummer SUV, a pair of off-road-capable vehicles from Rivian, the evergreen Jeep Wrangler and the new Defender.

Says Heilmann: “We have a massive task in front of us, building the brand and making sure everyone understands what the proposition is, what the vehicle is about and what we are about.”

Audi yanks bad banana ad
Should You Really Want A BMW M3 E46 In Your Life?
20 Moments That Made the 426 Hemi Great | MotorTrend
Tesla plans 5-for-1 stock split
Bentley Bentayga With Huge Spikes At Its Wheels Is An Abomination