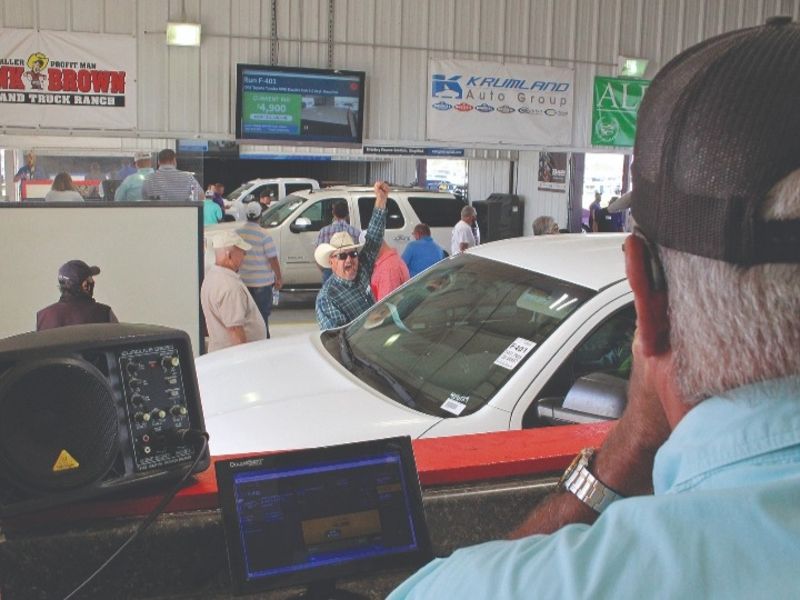 As in-lane bidders return to wholesale auto auctions amid the coronavirus pandemic, one thing is clear: Used-vehicle buyers want both physical and digital sales.

In-lane buyers at Manheim returned last week for the first time in three months at a handful of auctions while rival ADESA was allowing in-person buyers at more than two dozen of its locations.

Neither have returned to running vehicles physically through lanes.

But while these auction giants only now are allowing buyers back into the lanes after halting physical sales at the beginning of the crisis, some smaller auctions never stopped.

For example, XLerate Group, based in Indianapolis, continued hosting buyers at certain locations all along.

“Our preferred format is the combined format — physical and digital,” XLerate Group CEO Cam Hitchcock said. “And we believe that most of our dealers and consigners prefer that format. So when we’re able to offer that, when it’s safe and when it’s permissible, we’re clearly going to do that.”

In March, the spreading virus led the 13-auction XLerate Group, which also has seven mobile auctions, to completely close some operations and switch others to all-digital formats.

But at the company’s three auctions in South Carolina, Georgia and Florida, vehicles have continued to run through lanes with live bidders most weeks during the pandemic.

XLerate worked with local health departments and police departments in deciding how to operate various locations, Hitchcock said. Where physical auctions have continued, the lanes and offices now have markings to enforce social distancing, he said. The company provided personal protective equipment to customers and employees and put up plastic barriers. A continuous cleaning regimen is in force.

Over the past three months, as the severity of the outbreak varied greatly by region, there has been one confirmed case of COVID-19 among XLerate’s 1,200 employees and 400 contractors, and it was contracted outside the workplace, Hitchcock said.

At ServNet, a group of 24 independently owned and operated auctions, responses to the pandemic have varied by location. All ServNet auctions have worked with local and state health officials and law enforcement, said John Brasher, ServNet’s executive director. None of the auctions had in-lane bidding until early May, when a handful of locations invited dealers back. At that time, some of the auctions, such as one in Houston, invited top buyers by volume into the lanes for bidding.

At ServNet’s Akron Auction, attendees had to fill out a questionnaire crafted by the Centers for Disease Control and Prevention. In some cases, auction personnel took people’s temperatures when they came in, Brasher said. The Akron location also put large stickers on the ground with the slogan “BE SAFE & CAR FULL” as markers for social distancing.

ServNet’s auction leaders are “very cognizant” of the risks of opening prematurely, Brasher said, “because they’re the owners of the company.”

“They not only own the liability if something should happen,” he said. “But on top of that, these are their family members, the people they’ve been working with for generations and their customers they’ve known for decades.”

Through mid-June, ServNet had no reported cases of COVID-19 at any of its locations, Brasher said.

ServNet and XLerate saw a boost in online activity in April and May as they were forced to do more digital-only sales. Both were equipped for it, their leaders said. ServNet first did simulcast auctions in 1996. XLerate has switched to all-digital sales in the past amid major weather events.

But a completely digital auction world is still not a reality, and even the outbreak of a virus that spreads when people are in close proximity could not force a permanent shift. Even before the pandemic, though, some in the industry talked about ending the physical movement of vehicles at auctions for another reason: to eliminate accidents that have proved deadly.

Jim Hallett, CEO of Kar Global, which owns ADESA, bluntly told an industry audience last October that auctions will never be totally safe with cars running in lanes. Cox Automotive CEO Sandy Schwartz said in Automotive News‘ “Congress Conversations” series in May that he hoped no car would run through a lane “for at least the rest of this year,” adding that digital auctions are safer, quicker and “better for everybody.”

The executives have stuck to that so far, with vehicles appearing on screens even at locations that have welcomed back in-lane bidders.

On March 16, Manheim and ADESA each said they would switch to all-digital formats. Manheim didn’t invite in-lane bidders back until last week at five pilot locations. Another three locations are expected to follow in the coming weeks. In late May, ADESA opened six locations to in-lane bidders and expanded that to 28 as of last week. Like the smaller companies, ADESA and Manheim have implemented social distancing and other safety measures. At ADESA, buyers apparently have not rushed back into the lanes.

“The reality we’re finding is dealers want to come out and preview cars more than anything,” ADESA President John Hammer said. Some dealers then head back to their stores and bid remotely. The vast majority of ADESA and Manheim locations now allow in-person previewing before sales, company officials said.

KAR Global and Cox Automotive, which owns Manheim, have invested millions of dollars in digital and mobile wholesaling technology and have seen usage of their digital offerings grow. In 2019, almost half of Manheim’s sales and nearly 60 percent of ADESA’s transactions were done online. Manheim sold a record 23,000 vehicles via simulcast in a single day, President Grace Huang said.

ServNet’s Brasher said the number of digital sales at its auctions was “huge” in May, representing 62 percent of total sales for the month. But its auctions will not go all digital anytime soon.

“Many of our institutional sellers believe that the best market, best retentions, best prices are achieved with the presence of the physical buyers in the lane,” Brasher said.

Many dealers want to be there, too. XLerate’s Hitchcock said if other auction companies want to go all digital, “that’s their prerogative.”

“But I couldn’t see us doing that for a variety of reasons,” he said. “The biggest is that that’s not what our customers, and particularly our dealer customers, are indicating that they’d like to see.”