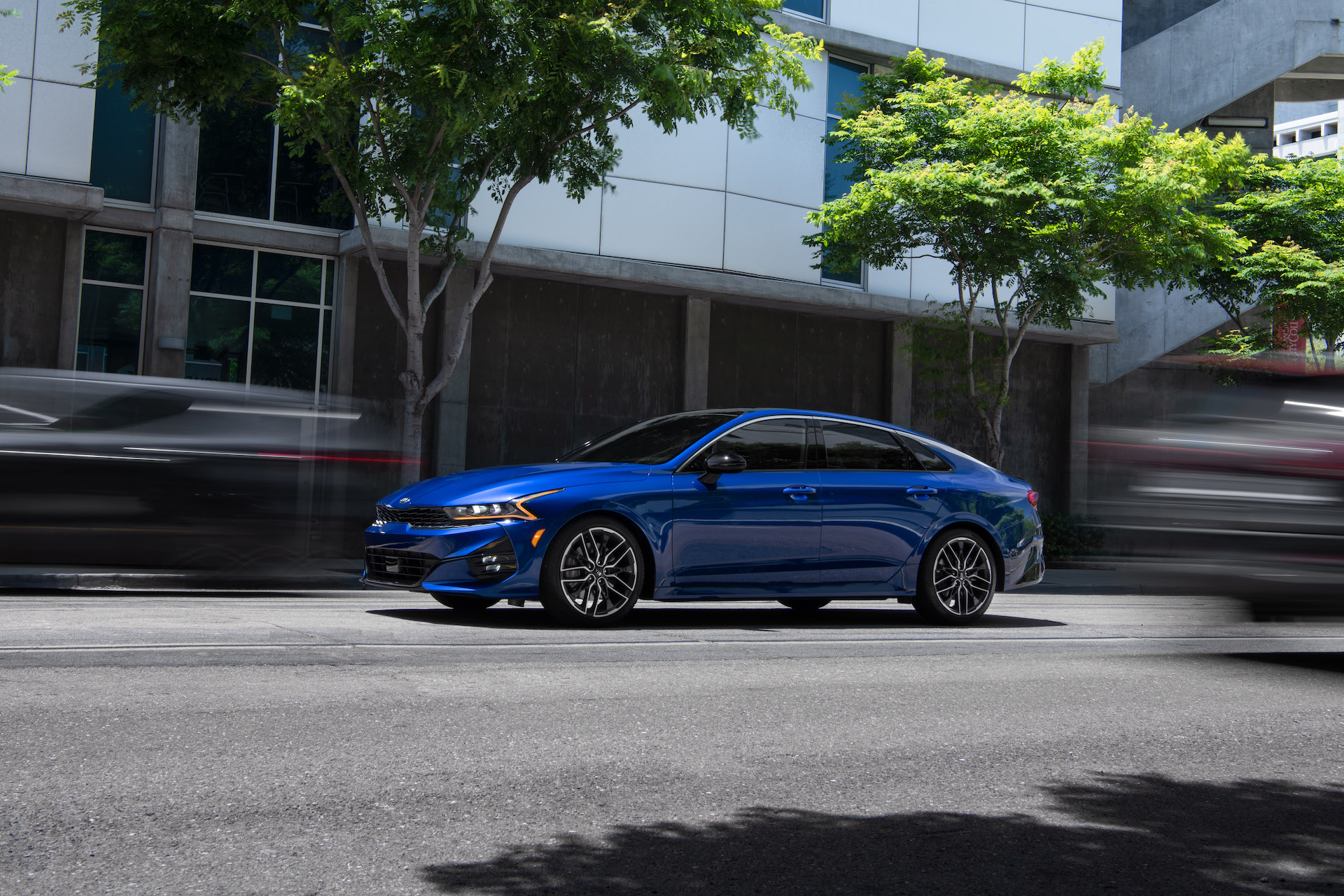 The 2021 Kia K5 marks a new era for the South Korean brand—and a new name is just the beginning for the automaker’s mid-size sedan formerly called Optima.

The 2021 K5 picks up where the Optima left off. The K5 is longer, lower, and wider than the sedan it replaces and will be available with all-wheel drive. A choice between two turbo-4 engines is all we’ll get for now, although hybrid versions could be in the mix soon.

When it goes on sale this fall, the Kia K5 will compete with mid-size stalwarts such as the Honda Accord, Toyota Camry, and even the Hyundai Sonata, which is mechanically related to the Kia. Kia hasn’t yet said how much it will cost, but it’s likely to cost more than the outgoing Optima’s $24,115 starting price. The K5 will be available in LX, LXS, GT-Line, EX, and GT versions.

Edgier than jorts but much better looking, the 2021 Kia K5 is sharper, meaner, and tenser than the outgoing Optima, which didn’t look bad either.

The new K5’s signature—like the related Sonata—is its lights that slash around the sides and into the honeycomb grille. Kia’s grille here is more hawkish, underscored by creases in the hood that angle toward the sedan’s beak. See what we did there?

The K5’s hood lines are along the body sides, similar to the outgoing version, and meet below the windshield cowl at a malfunction junction in the sedan’s only bad look from the pictures we’ve seen.

The body sides are sculpted with a heavy bend at the bottom to visually lower the car. (Good for cars, bad for jorts.) The Optima’s old “floating roofline” has been grounded in the K5, at least in most colors in the new version. A chrome strip running the length of the roofline reaches back around toward the rear window in a single accent that acts as a halo.

Around the back, a short decklid and full-length rear taillight span the trunk.

A 180-horsepower, 1.6-liter turbo-4 powers the K5 in every trim except GT. It’s paired to an 8-speed automatic and front-wheel drive. All-wheel drive is available on GT-Line and EX trims for the first time and clutches in for all-weather traction.

A 290-hp turbo-4 will be offered on K5 GT models that drives the front wheels only via an 8-speed dual-clutch automatic transmission. Kia says it can accelerate up to 60 mph in less than six seconds. We’ll be the judge of that.

The 2021 K5 rides atop a wheelbase longer by 1.8 inches than the outgoing 2020 Optima, which should make for a more spacious sedan. The outgoing Optima offered just 35.6 inches of rear seat leg room, less than the Accord and Camry, but 15.9 cubic feet of cargo room, which is generous for its class.

The new K5’s interior theme is broad and wide, with an available 10.3-inch touchscreen mounted above the climate controls in the center stack. (An 8.0-inch screen is standard.) A 12.3-inch digital instrument cluster faces the driver, and an available 8.0-inch head-up display adds yet another screen.

Cloth, synthetic leather, or leather upholstery is bathed in interior ambient lighting in the K5 and the dash can be finished with metallic or wood surfaces.

In addition to upsized touchscreens, a head-up display, leather upholstery, and bigger wheels, the Optima will offer advanced safety features, a voice-recognition system, premium audio by Bose, and navigation.