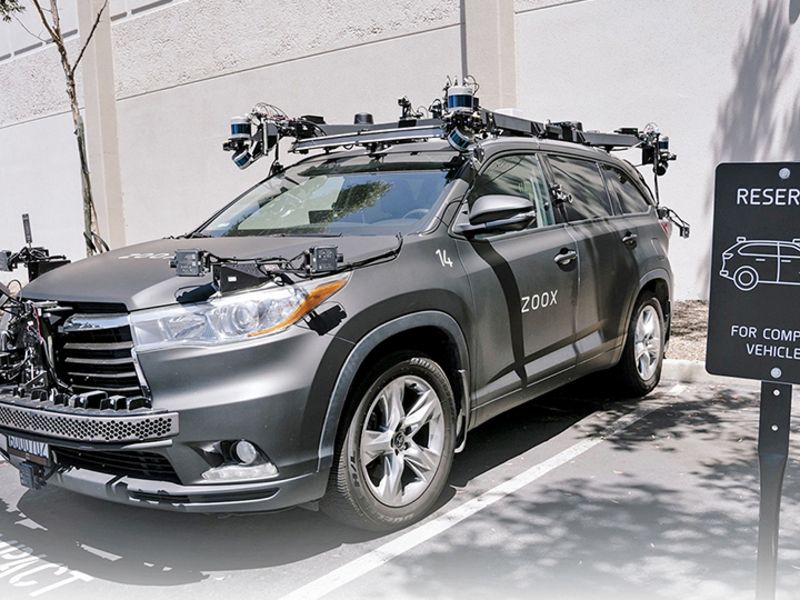 Of all the ambitious projects attempted in the short history of self-driving technology, no company has been more audacious than Zoox.

Since the startup’s founding nearly six years ago, its executives have pursued an arduous path that involves developing their own autonomous driving system, creating their own vehicle platform from the ground up and building their own ride- hailing platform all at the same time.

So it seems fitting perhaps that another aggressive company, Amazon — which has sought to do nothing less than dominate American retail — has emerged as a potential suitor as Zoox readies itself for sale.

Last week, The Wall Street Journal reported Amazon was in “advanced” discussions to purchase Zoox at a significant discount to the $3.2 billion valuation it achieved during a 2018 funding round. A company spokesperson said Zoox would “not comment on rumors or speculation” regarding a potential sale.

Succeeding in any one of its three simultaneous endeavors would be a capital- heavy proposition for Zoox, which has amassed $955 million to date. During the coronavirus pandemic, with fresh funding difficult to come by, accomplishing all three has become cost-prohibitive.

“It’s a tough business, and they chose a particularly tough path,” Sam Abuelsamid, principal analyst at Guidehouse Insights (formerly Navigant Research), told Automotive News. “From a purely technical standpoint, it’s a wise decision. Anyone who succeeds in this will use vehicles specifically designed for robotaxi service. From a business perspective, it’s a challenge.”

Whether Amazon or other prospective suitors would be interested in running that robotaxi business — or using Zoox’s bespoke electric vehicle platform at all — are intriguing questions.

While some observers have surmised an Amazon acquisition suggests the retail giant would seek to compete with the likes of Uber and Lyft, Abuelsamid and Asad Hussain, mobility analyst at PitchBook, see the potential match more as a chance for Amazon to add to a burgeoning logistics empire that competes with UPS Inc. and FedEx.

“Zoox’s modular electric platform enables that. And Amazon has clearly been very interested in the autonomous future. Right now, this is them being opportunistic and taking advantage of market conditions favorable to buyers.”

Amazon’s autonomous ambitions have been apparent since 2016, when the company made its first parcel delivery via unmanned drone. In January 2019, it showcased its six-wheeled Scout delivery robot. One month later, it made an investment in Aurora Innovation, the self-driving technology company formed by former Google, Tesla and Uber executives.

At roughly the same time, Amazon led a $700 million investment round in electric vehicle startup Rivian, and it has since ordered 100,000 of the company’s delivery vans, slated to hit the road by 2024.

Exactly how a Zoox acquisition would complement or compete with Rivian’s EV platform remains unknown. Amazon could utilize Zoox’s self-driving system on Rivian’s electric vans, but there’s also value in the bidirectional capabilities of the Zoox prototype, particularly in congested urban environments. Bidirectional means the vehicle can reverse directions without turning around.

A mashup of Zoox and Rivian technologies and business plans, Abuelsamid says, might be a win-win for the two companies.

“I could see Amazon taking the Zoox vehicle to Rivian and saying, ‘OK, build this one for us too,’ ” he said. “Now Rivian is using more of their production capacity. You could adapt Rivian’s batteries, motors and electronics, and now they have extra scale. It helps their economics, and Amazon could use both types of vehicles.”

From utilizing automated robots in its warehouses to its growing fleet of Boeing 767 aircraft, Amazon has assembled many pieces in an end-to-end transportation infrastructure that could realize cost savings of as much as $20 billion, according to a Morgan Stanley research note issued last week. Purpose-built delivery vehicles help fill in a middle ground.

It’s not just about transportation.

Over time, a Zoox acquisition could result in further service enhancements for Amazon Prime customers in the form of discounted grocery deliveries from Amazon-owned Whole Foods or cheaper fares in a ride-hailing network, should Amazon decide to pursue that route.

Right to the doorstep, via Amazon-owned Ring, the company could ostensibly vertically integrate the journeys of people and goods.

“All these aspects of their business point to them wanting to control everything from top to bottom,” Abuelsamid said. “You can almost think of it as the same concept behind the original Ford Rouge plant. Raw materials went in one side and a finished Model A came out the other side.”

Other suitors for Zoox may exist. Hussain posits there are reasons Apple, Intel, Nvidia and Toyota could all be potential bidders for an autonomous startup viewed favorably throughout the industry. But Amazon may have the war chest to outbid competitors.

“It’s a question as to how they’d use that technology,” he said, noting the investments in Rivian and Aurora. “It’s a lot of opportunity.”