As consumers continually turn towards SUVs and crossovers, it seems as though fewer and fewer enthusiast-focused cars are available. Many manufacturers, such as Ford, are caving to the pressure of buyers and in some markets, such as the United States, have completely stopped selling traditional cars and sedans (except, in Ford’s case, for the Mustang).

With this in mind, Hyundai has to be applauded for launching a second-generation Veloster back in 2018. The South Korean automaker could have very easily made the decision to kill off its intriguing three-door when the first-gen model had run its course, but it didn’t. Instead, it decided to drastically overhaul the coupe – and this is the result.

Fun can come in small packages

Hyundai says the Veloster Turbo with the six-speed manual consumes 7.3 l/100 km (32.2 U.S. mpg) over the combined cycle. We weren’t quite able to match that, but recorded an impressive average of 8.2 l/100 km (28.6 U.S. mpg) with a mix of urban driving, motorway driving, and a brief dash through some twisties. 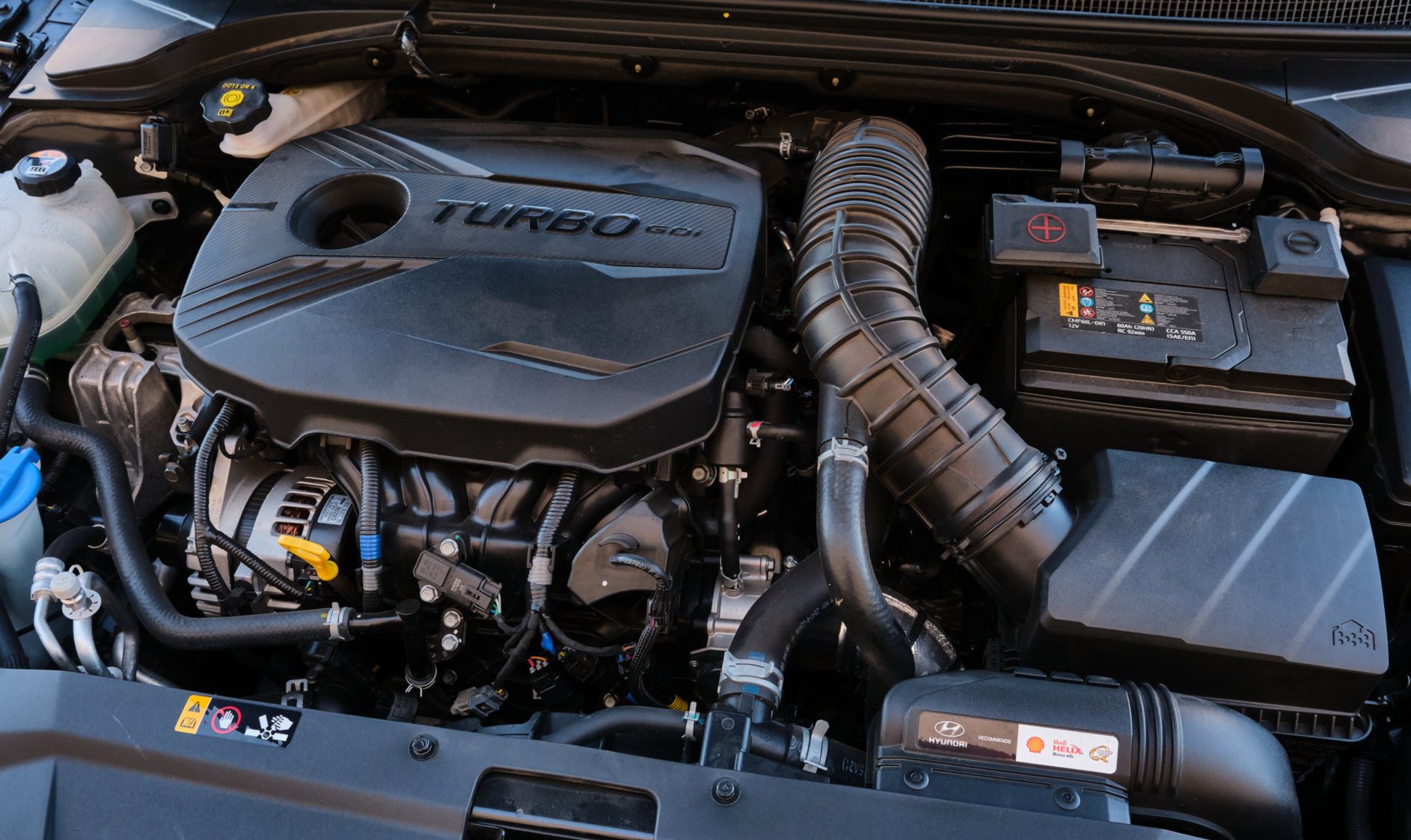 Heading into my week with the three-door Hyundai, I expected it to feel quite similar to the Kia Cerato GT I tested a few weeks earlier as both feature the same engine. Much to my surprise, they feel very different.

Setting off for the first time, I was instantly struck by how lightly-weighted all the controls are. Hyundai has clearly made a point of ensuring the Veloster Turbo appeals to enthusiasts and the general public alike, resulting in a very light shifting mechanism and a light clutch. The steering is similarly light and suits the character of the car very well. Everything feels about 40 per cent lighter and more forgiving than the Hyundai i30 N and is perfectly fitting for a vehicle competing in the growing warm hatch/coupe space.

Found at the back are dual tailpipes that produce a throaty growl when you push the throttle, making the car feel very sporty. When inside, however, the exhaust is inaudible and rather than using a fake noise generator like the Cerato GT to amp-up the atmosphere in the cabin, there is no such fakery in the Veloster. That can be viewed as either a good or a bad thing. On one hand, the sounds coming from the engine bay are authentic, but on the other hand, they are also very bland for a car like this, as the engine doesn’t sound any more special than the standard 2.0-liter you’ll find on entry-level i30 models.

Making up for the lack of theater is an engine that offers good grunt, no turbo lag, and consistent pull throughout the rev range. The 1.6-liter turbo can feel a little strained at higher revs, but it’s enough to get the coupe going at a good pace. The positive engagement of the shifter adds to the fun.

It comes alive through the twisty stuff

It is in the twisties where the Veloster Turbo really shines and makes the most of its compact size. Turn into a corner with some pace and the MacPherson struts at the front end and multi-link suspension at the rear give you a good idea of what’s going on, which allows for easy mid-corner adjustments to be made. Driving the Hyundai through the hills somewhat reminded me of the Toyota 86. Obviously, the Veloster is front-wheel drive where the 86 sends its power to the rear, but both are cars all about momentum, and when you build up enough speed, they both thread through corners like a hot knife through butter. It really is a joy and felt far more engaging and light on its feet than the Cerato GT. Morover, the brakes are also excellent. 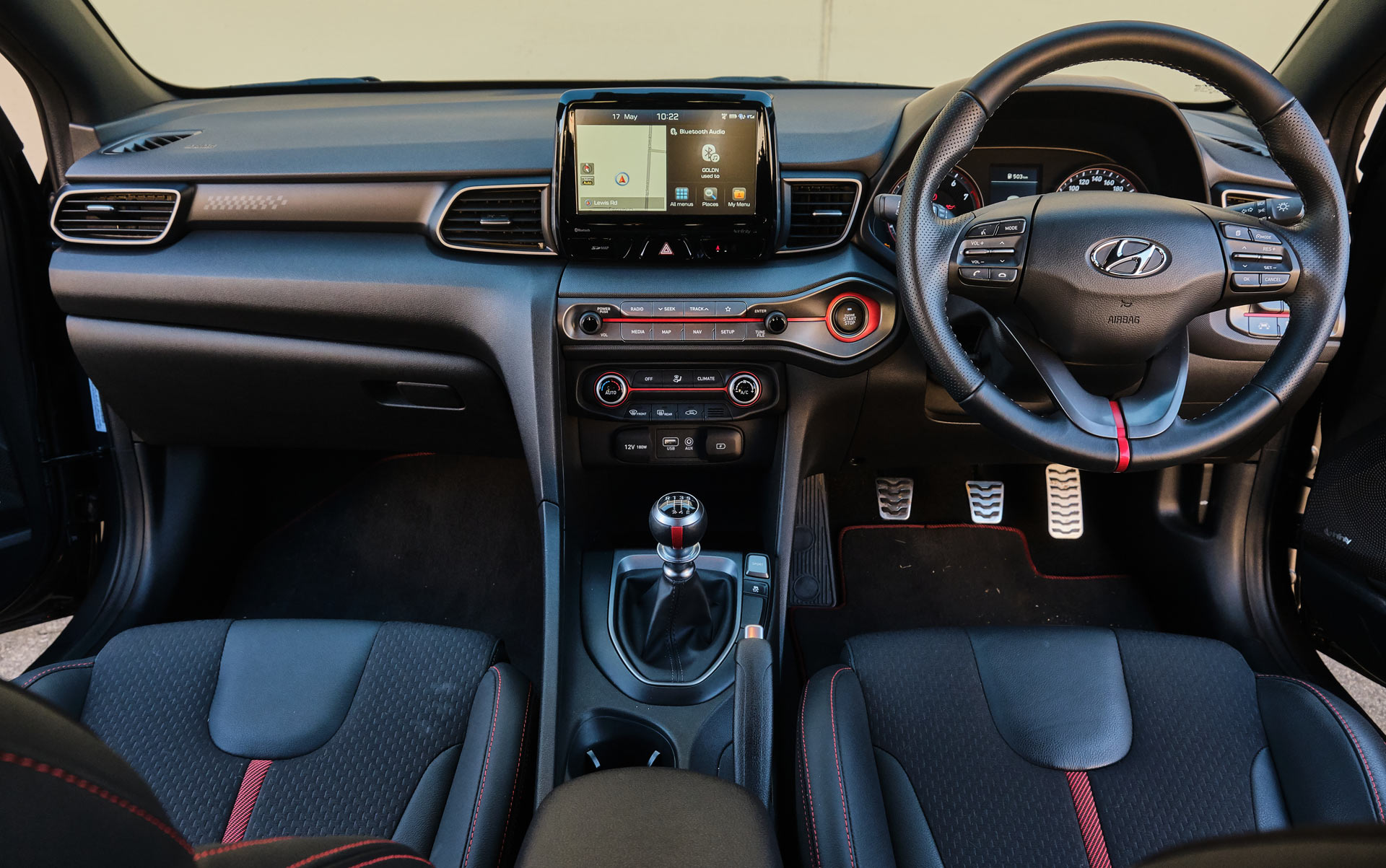 Inside, the 2020 Hyundai Veloster is made distinct from its Korean siblings thanks to some custom switchgear across the dashboard. Adding to the sporty appeal of our test car were a host of bright red accents.

The steering wheel is familiar Hyundai, as is the infotainment system sitting atop the dash. Like other Hyundai and Kia models, the infotainment software is easy to follow and understand but is starting to feel old in its design and graphics. Included within the system is a setting to display variables such as turbo boost, g-forces and engine output, which makes for a nice little feature.

Mechanically, the Turbo and Turbo Premium are identical, with most of the differences found inside. For example, the Turbo Premium gets rain-sensing wipers, leather-appointed seats, a power-adjustable driver’s seat, Qi wireless charging, sunroof, electro-chromatic auto-dimming mirror, Head-Up Display, ventilated and heated front seats, a heated steering wheel, and exterior goodies like bespoke wheels. 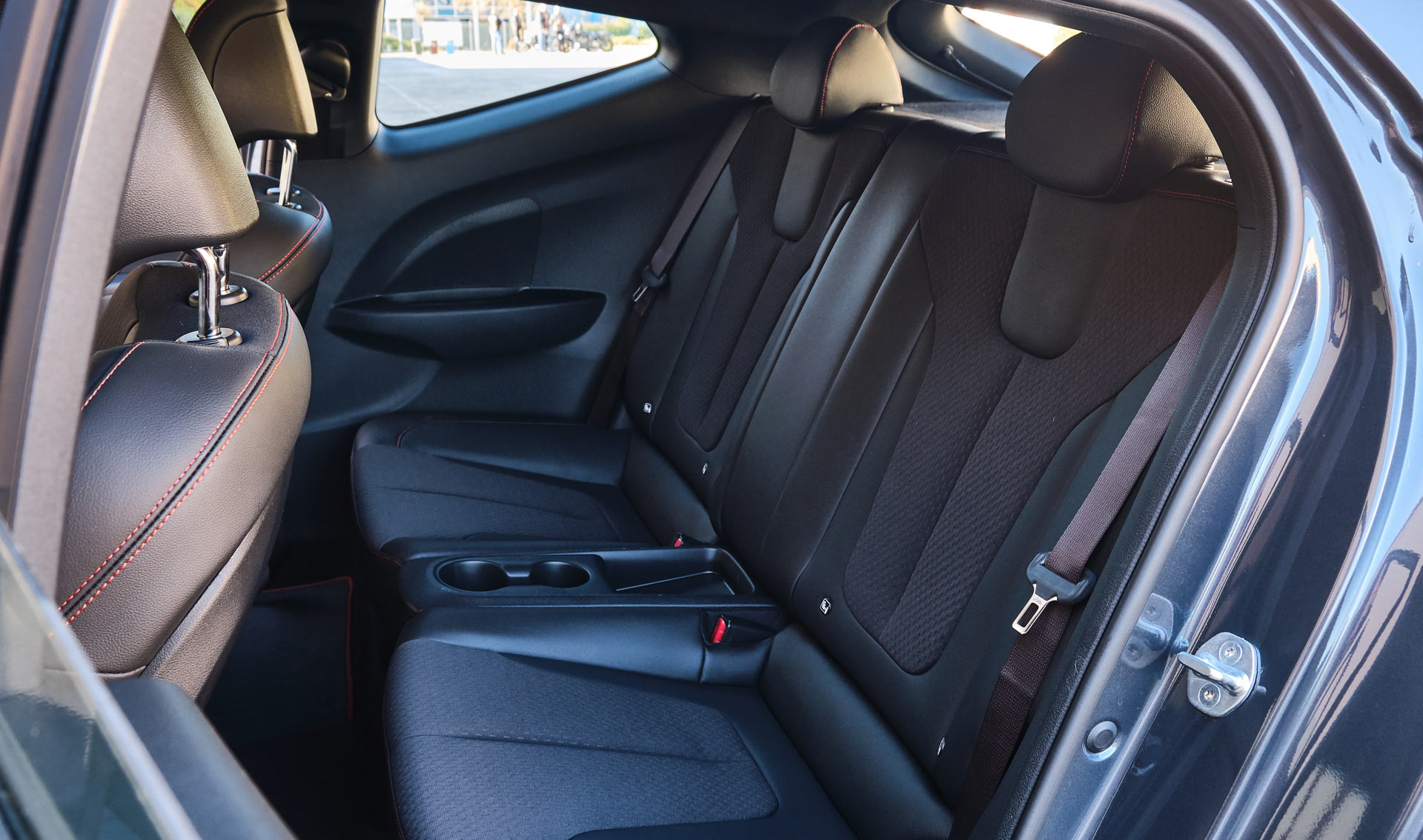 At the rear, space is cramped, as one would expect. While legroom is decent, tall rear passengers will get a sore neck every time they’re forced to sit back there. The boot is 303 liters (10.7 cubic-feet) under the shelf; not amazing, but not terrible either.

It sure ain’t cheap 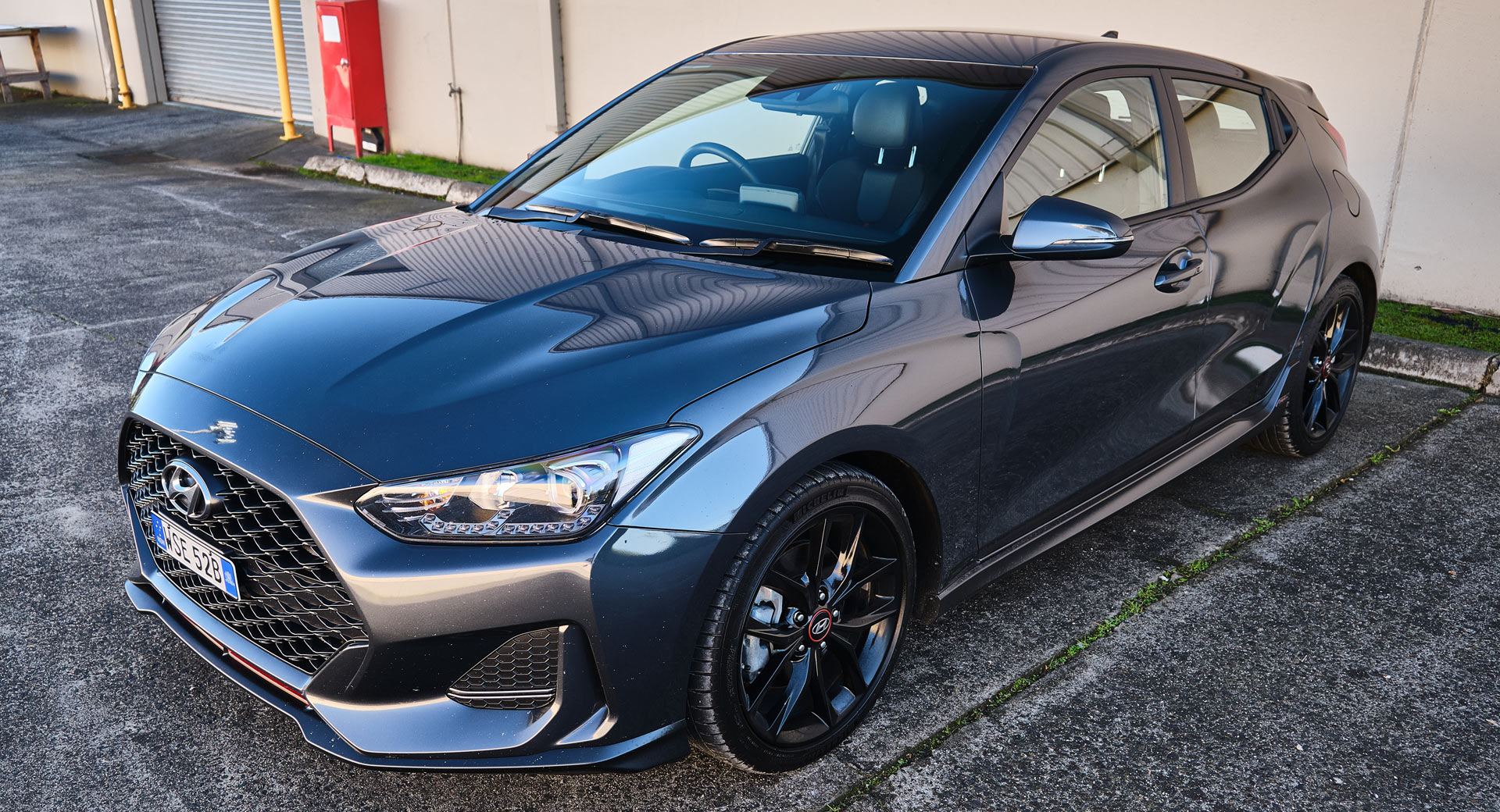 Prices for the Veloster Turbo and Turbo Premium could be viewed as being at the upper echelon of what buyers will be willing to pay locally. In fact, the Hyundai i30 N is available from AU$45,742 (US$30,287) driveway (without any end of financial year discount) with the sole six-speed manual available. Not only does it offer greater performance than the Veloster, but it is also far more practical.

However, history tells us that people are willing to pay a premium for coupes and we have little doubt that the looks alone will be enough to convince a number of buyers to opt for the Veloster over the i30 N – that, and the fact that it’s bags of fun to drive. 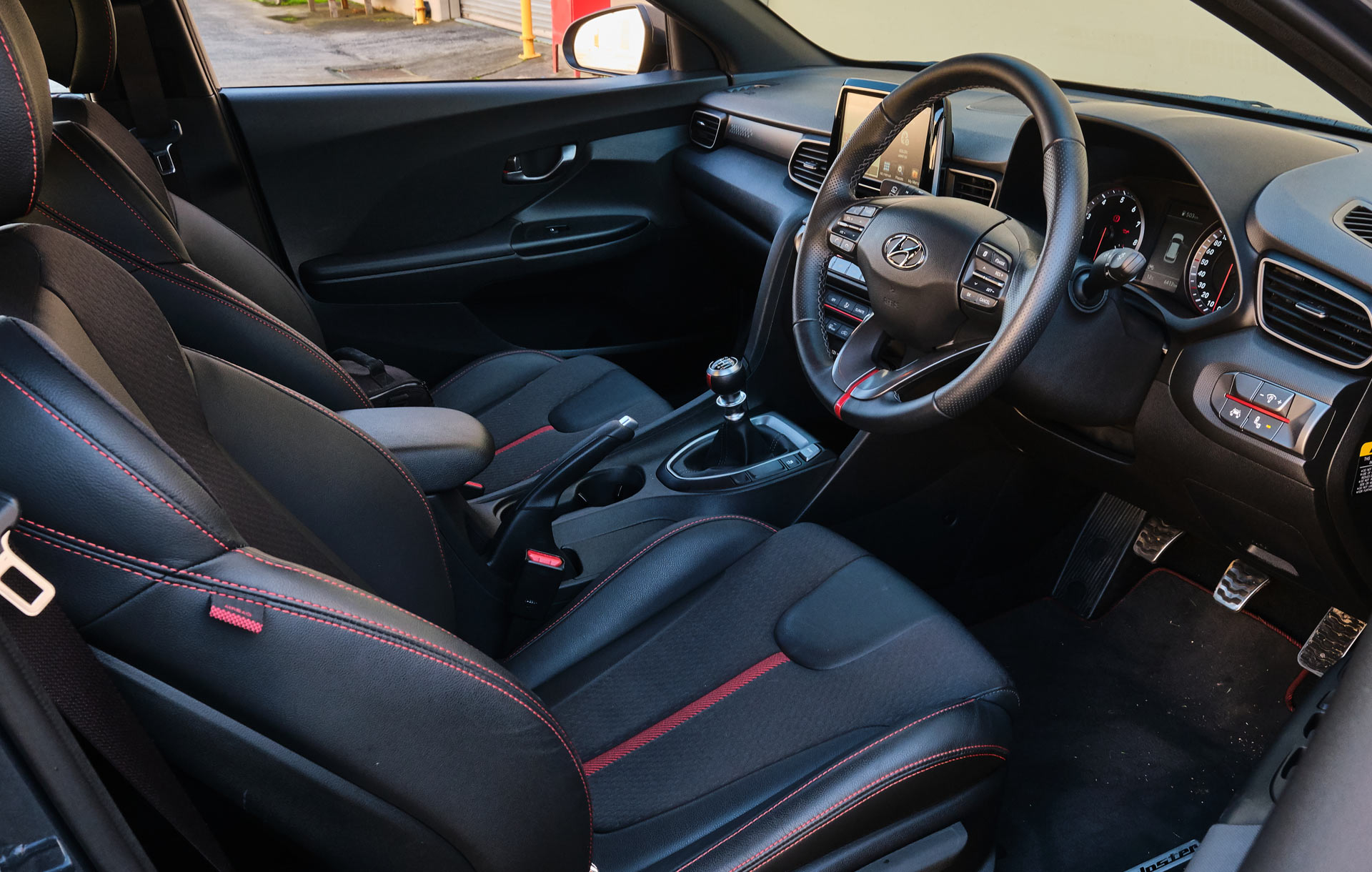