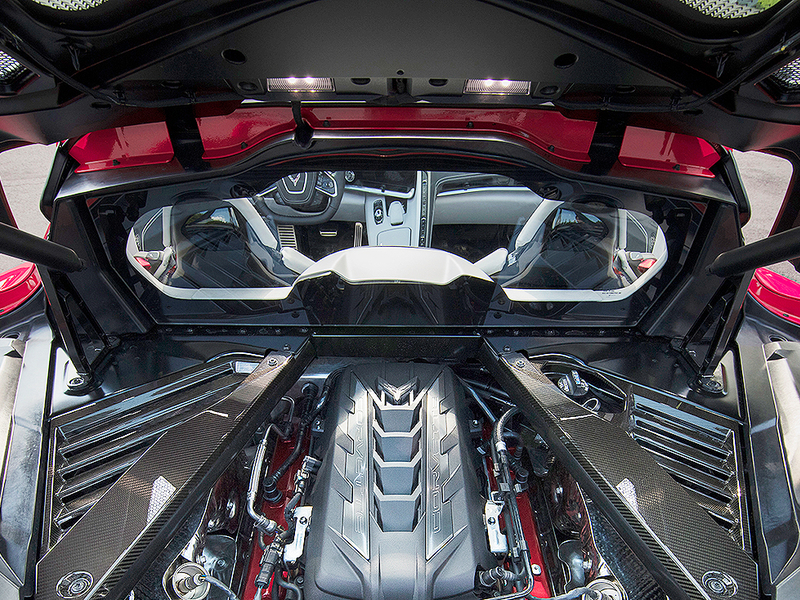 On Chevrolet’s upcoming midengine Corvette, there’s no need to ask what’s under the hood. Its engine is visible through a clear hatch in the body. That meant engineers not only had to put up impressive horsepower and torque numbers, they also had to make sure the looks of the V-8 matched its performance. If the Corvette were a ring, its designers said, the engine would be its jewel.

“The engine really was intended all along to be a kind of showpiece of the car,” said Mike Kociba, General Motors’ assistant chief engineer for small block engines. “There is now a window. You can see into our world directly for the first time.”

A polycarbonate insert in the engine compartment cover behind the driver exposes the 490-hp, 6.2-liter V-8, which means every part that can be seen had to be painted and finished.

“Engineers, we’re very functional. Every feature, facet you see of course is purposeful, but generally in our mindset, it’s just purposeful,” Kociba said. “Now you want to take that extra step and say it not just has a function, it has a style. That really takes us out of our comfort zone.”

The engineers and designers went back and forth for about a year before finalizing an engine that achieved their design and performance goals. At times, the two teams had to break through a language barrier of sorts before making progress.

“The first time I tried to explain beautification [to the engineers], they looked at me like I had three eyes,” said Paul Arnone, lead creative designer for performance interiors.

Designers would say, for example, that the black shade on certain components wasn’t “warm enough.”

“It’s almost a whole different language that they use. As an engineer, I have no idea what temperature has to do with color,” Kociba said.

“As you start working with them and they show you different examples, it absolutely makes sense.”

The team wanted the 2020 Corvette engine to be on par with that of a Ferrari or Lamborghini. “Even though we didn’t have the same price point, we still need to execute just as well,” Arnone said.

Designers pored over the finishes on each component and made sure everything was in “color harmony,” he said. For parts that are less attractive, they toned down the finish and made the colors less eye-grabbing.

The red engine cover is aggressive and looks high-tech, said Kirk Bennion, the Corvette’s exterior design manager. “It has a little bit of spinal quality in the veins going down the middle. It sets a different tone of the car. It’s not timid or anything like that. It’s a provocative part.”

But it isn’t just for show. It also keeps components in place and is “integrated into the workings of the engine,” Arnone said.

GM plans to start building the 2020 Corvette in February in Bowling Green, Ky. The automaker has invested $439 million over the past four years to ready the factory with new production equipment, a new paint shop and a low-volume engine production facility called the Performance Build Center.

With the move to a midengine layout, engineers and designers faced a unique challenge with the Corvette: no benchmark to start from.

“We were creating a baseline for this rather than looking at previous designs as a benchmark. There was a steep learning curve,” said Guy Samuels, GM’s creative designer for performance interiors.

They worked through several concurrent proposals over more than a year.

Designers touched nearly every component under the hood and hatch “just to make sure the car was truly and wholly designed and it just wasn’t piecemealed together,” Arnone said.

The design team even created a bolt style for the Corvette because it didn’t like any of GM’s preapproved bolts. Designers were part of the engineering conversation, which “lends itself to us having creative opportunity firsthand,” Bennion said.

When designing the bolts, the team drew inspiration from Ducati motorcycles. “All their bolts are internal drive, and they have a nice finish to them. They don’t scratch or mark,” Arnone said.

Some of GM’s engineering criteria prohibited bolts with an internal drive, so the team created a dual-drive bolt, which has a cleaner, more stylized look.

“It’s unique to the Corvette right now. It was definitely a different aspect of my job,” Arnone said. “I’ve been doing this for a while, and I’ve never helped develop a bolt.”

Tesla’s (TSLA) Elon Musk is within striking distance of a bonus worth $1.8B in options
Is The 2020 Buick Encore GX Worth The Premium Over The Encore?
Tesla takes 23% of China’s overall EV market in June; Model 3 sales rise 35%
DHL to cut 2,200 jobs at Jaguar Land Rover plants
Audi’s RS4 Avant Can Easily Outperform The BMW M340i Touring, Right?