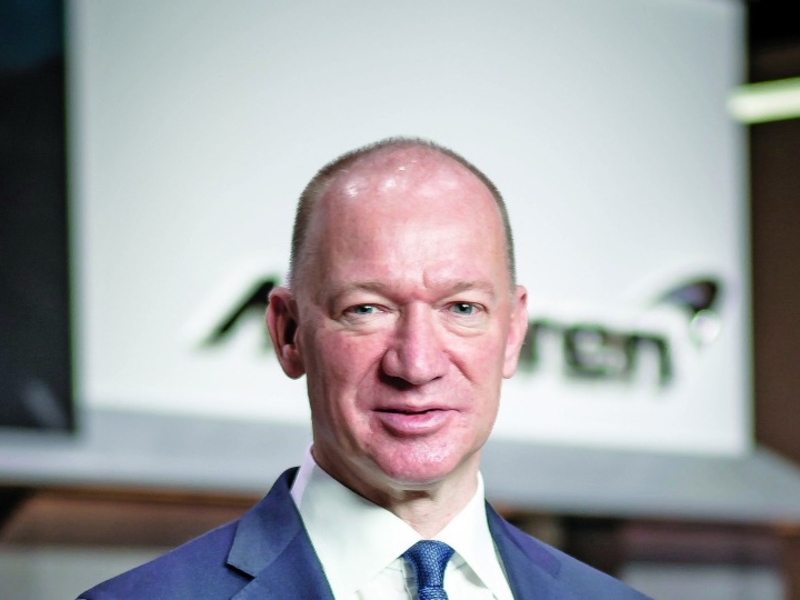 DETROIT — McLaren Automotive builds one thing and one thing only: supercars.

It has no SUVs to lean on for higher volumes, nor does it have partner automakers to turn to for a parts bin.

And McLaren as an automaker is still relatively young, with vehicle sales starting just eight years ago, in 2011.

Despite that, the British exotic brand is seeing success with an expanding product lineup focused on lightweighting and performance. And with McLaren’s Track 25 business plan, fresh products will arrive regularly through 2024.

McLaren sold 4,806 vehicles globally last year, a company record, and CEO Mike Flewitt is targeting about the same this year.

Flewitt, a former Ford of Europe executive who has been with McLaren since 2012, nearly all of the company’s existence as a road car maker in its current form, has seen plenty of change at parent company McLaren Group. When he joined, the company’s business predominantly came from its Formula One team, and the McLaren Automotive unit had just 30 retailers globally and produced 1,200 cars. The balance has since shifted, with up to 90 percent of the group’s revenue coming from the car-making unit today.

More changes are ahead, namely electrification. But that won’t take away from McLaren’s vehicles, he said: It will enhance them.

Flewitt, 57, spoke with Staff Reporter Jack Walsworth during a stop in Detroit. Here are edited excerpts.

Q: What does it mean for McLaren being an independent business?

A: It really is pluses and minuses. There are days when we have a supplier concern, a technology issue, cash flow is tight or something where you think, “Gosh, I wish I had that big partner, that big brother to look after me.” If we have a problem, we have no one to go [to]. If I think back to my days at Ford, even when I got to corporate officer, there was someone you could go talk to. This is it. Sometimes I say to my team, “Look around the room, guys. It’s us.” We’ve got to solve our own problems. That can be stressful, but equally it can be amazingly rewarding because the connection then between what you’re doing and the success of the company is so much more direct. In the same way that you’ve got to take responsibility for the tough things, you can also take responsibility and pride in the successes because you’re doing it.

What it does give us, though, is freedom. We are able to make decisions that are just absolutely right for McLaren, for the kind of cars we make, for what our customers want, so they’re incredibly focused. It does mean our technology set, our component set, is absolutely supercar specific. When people ask me, “Will you make cars in other segments, like SUVs?” we don’t have any components for that. But what we do have are components that are absolutely dedicated purpose designed for [the supercar] function.

Do you see North America continuing to be McLaren’s leading market?

I think it will be. I’m going to say forever, but that’s an awful long time, so certainly for a long time. Just take the demographics, the wealth. It’s almost a bit unfair when people say, “Which is the biggest market?” and I go, “Well, the U.S.” Because it’s kind of, like, of course it’s the U.S. We would be doing something wrong if it wasn’t. But right now, it’s the U.S., the U.K., Japan, Germany, China. The U.S. is going to lead that picture for quite a time. It’s a great market, a very healthy market. It’s got a mature understanding of the type of product. It’s got a lot of customers who love these kinds of cars. We’ve got excellent retailers here who know the market and know their customers. It’s a good many years ahead of most of the other markets around the world.

What does the China market mean for McLaren going forward?

It’ll grow steadily and slowly. The reality is that if you take the people with money in China, the generation that really first came into that kind of wealth pretty much [doesn’t] buy our cars. They’re delighted to be driven in saloons or SUVs, or they haven’t got the bug for sports cars. It tends to be their sons and daughters. We’re more selling to the second generation. One thing it does mean is our demographic in China is the youngest of anywhere in the world. Our customer age group is 25 to 28. It’s unbelievable.

And female buyers as well; it’s a very, very different mix in China. As that age group grows, I don’t think they’re going to lose their taste. They probably will still have their saloons and SUVs, but they’ll have their sports cars because they love them. And people will come up behind, so I see the market in China growing for us but steadily over 10 years, 20 years. Heck, if we grew by 25 cars a year, I’d be happy. [It] sounds like tiny volume in the automotive sense, but we’ve gone from nothing in 2013 to about 350 cars. We’ve got a plan over the Track 25 period that takes us to about 500 cars, and that will be really strong.

How much of a challenge is brand recognition for McLaren?

It was our biggest challenge at one time, if I go back to when I joined in 2012. I remember doing a survey in the U.S. on purchases over $150,000 and saying to people: Name a supercar company. We were the bottom of the list. Then you’d say, “What do you associate McLaren with?” and they’d say Formula One. This was very true of brand awareness then.

We’ve come a long, long way from that time. But still, I don’t think we have the brand awareness in our segment of some of the brands who have been around for 70, 80 years. Building that awareness is key.

I’m an engineer; I’m a production guy [at] heart, not a marketing guy, so I’m going to give you my theory on marketing. My theory on marketing, thinking back to when I did my master’s, is still down to two very simple things. One is that you’ve got to get your name on the shopping list. And then secondly, when you’re on the shopping list, you’ve got to have a reason for the customer to choose you. If we’re on a customer’s shopping list — if you say, “Hey, I’m going to buy a supercar; these are the five cars that I’m interested in” — if we’re one of those five cars and you go try them, I think we’ve got an extremely high likelihood of you choosing our car.

The chances right now of being on that shopping list are the challenge because we’re not as well-known as the established manufacturers. We’re still a startup in some ways; we’re still the new boy. People talk a lot about disrupters from a technology point of view, but we’re a little bit of a disrupter in the supercar market.

Track 25 was an effort to explain what we are and where we’re going. You don’t have to tell people what your business strategy is. We wanted to because we wanted people to understand the company better. And so I think we’ve come a long way in six years, but it remains one of our key areas of focus.

What do plug-in hybrids mean for McLaren going forward?

They’re essential. I don’t know any other way to meet the emissions challenges that we all need to meet globally. What’s being looked for in the U.S. isn’t so different than Europe. China is probably pushing harder than anybody else, so the only way we can get down, below 100 grams of CO2, is going to be with hybrids and plug-in hybrids initially. We’ve proven in the Ultimate Series with the P1, the P1 GTR and Speedtail that actually a hybridized powertrain can bring advantages, not just in emissions.

We’ll do our first series hybrid in the next couple of years, and that car will be a plug-in. It will have 25 to 30 miles of EV range. But most importantly, it will still be absolutely superb. It will be a better supercar than the one it replaces. That’s the key — to combine all those things. I’ve driven the preproduction cars, and it’s absolutely superb. It brings additional dimensions because you’ve got all the power and performance, more power and performance than the current range, but you have that EV capability if you want it. You can choose to start up in EV. My commute from my apartment to my office is 12 miles. I could do that on pure EV if that’s what I wanted to do. It brings more breadth to the product. I find hybrid exciting; I find EV challenging.

What’s the timeline for an EV from McLaren?

It’s going to be very dependent on the batteries being right. I’m not going to be very precise. It’s going to be between 2025 and 2030. But to put an exact year on it, I’d probably get it wrong. We need to get to a point where we can get the performance, the range, the recharge time and the weight. We need all of those. Because for us, if you think of it just as a power source, if somebody said, “Go make me an EV product,” I can do that. And I’d make the best EV product possible, but it doesn’t necessarily mean it’s the best supercar. And the point for us is, it needs to be the best supercar.

We’ve laid it out pretty much in Track 25. We will be — let me hedge my bets — somewhere between 5,500 and 6,000 cars. We’ll see the GT range filling out a little bit and balancing our supercars, and we’ll be staring at the next-generation P1, which will be again a real technology-leading car in that segment. We’ll probably see the whole range hybridized. We possibly won’t see an EV in there yet, but we may be in a good position to predict exactly when it’s coming along. We’ll probably have 100 retailers around the world and much better brand awareness because we’ll continue to grow.

Why closing car plants in France is a long and painful process
Remote work will broaden talent pool, exec says
2020 Ford Explorer vs. 2020 Lincoln Aviator: Which Should You Buy?
Russia’s Yandex plans to stay in Mich., double its Detroit fleet
Fiat slow to resume output, with demand low and inventories high