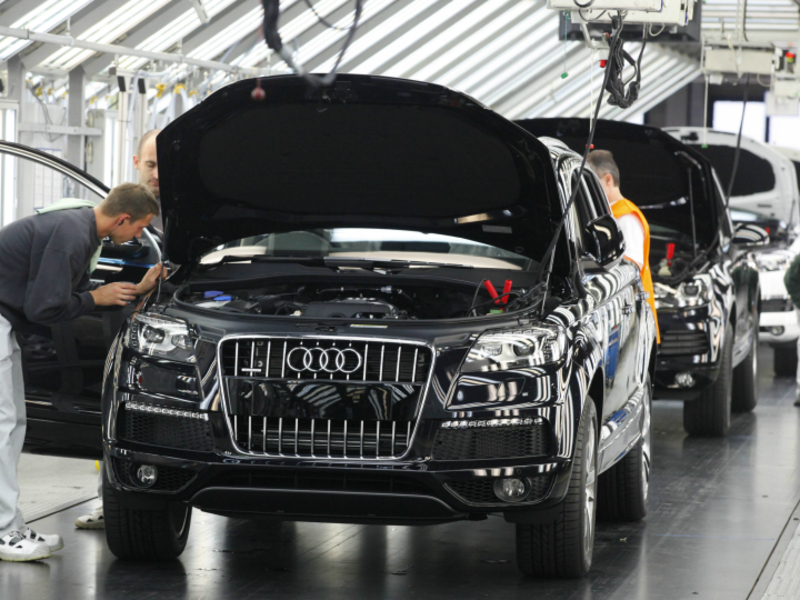 PRAGUE — In a steamy foundry behind a century-old Czech brewery, a mechanical arm pours molten aluminum into a two-story robotic mold. Within seconds, gleaming pump covers for diesel engines roll out for inspection.

The state-of-the-art production line at Motor Jikov Group in Ceske Budejovice, near the border with Germany and Austria, is running at full speed to deliver orders to Volkswagen Group’s Scania truck unit.

But the upgrades that cost millions of dollars represent more than the success of a well-run midsize business. Executives see them as a matter of life and death in a cutthroat industry gripped by existential dread.

More than a hundred companies like Motor Jikov are scattered across the Czech Republic, a stronghold of the European auto industry and a pillar of the national economy. They serve factories that build cars powered by combustion engines — and are squeezed by the rise of electric mobility.

“It’s a question of which companies are capable of surviving,” Motor Jikov General Manager Miroslav Dvorak said. “For us, this means foremost a huge investment, in order to reach the level of a completely new type of products.”

The Czech Republic and Slovakia, its former federation partner, make more cars per person than any other country in the world. The vast web of component-makers employs almost twice as many people as the car factories themselves.

Attracted by a cheap skilled workforce and proximity to major European markets, foreign investment has built up an industry that churns out millions of cars carrying the Volkswagen, Skoda, Hyundai, Kia, Peugeot and Land Rover logos.

The shakeup of an industry dominated by traditional cars for 120 years is pitting the suppliers against each other, in competition for a shrinking order book. Ultimately, this tectonic change will force them to replace about half of their total output, according to Dvorak. Sales of Czech car-parts makers totaled 460-billion-koruna last year ($20 billion), of which three-quarters were exports.

Advancing innovations and tightening environmental norms are upending all corners of the automotive world.
Just two weeks ago, Elon Musk announced that Tesla Inc. will build its new factory in Germany, the birthplace of the internal combustion engine.

The trend risks creating economic and social ruptures in the Czech Republic and Slovakia, where automotive investments have been a dominant driver of transformation after the fall of Communism 30 years ago.

“We are now in quite a dangerous period,” Petr Knap, an Ernst & Young’s partner in Prague, told a gathering of auto-industry executives on Nov. 12. “For the next two or three years, things may be evolving. But then we may see big disruptions.”

One of the drivers of the change is the European Union’s plan to cut carbon emissions by 40 percent from 1990 levels within a decade. With the transportation sector the source of nearly a quarter of global greenhouse gases, the Clean Energy Ministerial, a global forum with members including the EU’s largest economies and the U.S., wants to raise the share of electric cars to 30 percent of the total market by the same time.

At the core of the problem is the fact that electric cars require a fraction of the estimated 2,000 parts needed for an internal combustion engine. That means more competition for fewer parts and a threat to producers specializing in powertrains.

The Czech government estimates that about 40,000 jobs depend on the combustion engine, requiring programs to retrain at least some of those workers for electric platforms.

“The supply chain can’t survive with many participants in their present shape and form,” Ernst & Young’s Knap warned.

Even global automakers with more financial resources will face difficulties to adapt. Half of them are not in a strong position to handle the transition requiring a step-change in the production and sales of electric vehicles as well as the level of technological investment, according a report by Moody’s Investors Service.

“Now they want us to change the whole industry,” said Robert Kiml, a senior manager at the Czech operation of Toyota Peugeot Citroen Automobile. “Of course, we’re scared. Our suppliers have no clarity whether their business and investments are going to pay off.”

About half of Motor Jikov’s annual sales of 2 billion koruna come from products like the pump covers for Scania trucks or lube oil pump houses for Toyota. The company invests 5-8 percent of its revenue every year to diversify away from the combustion engine.

Helping with transition is Radomir Hrouda, Motor Jikov’s manager for technical education. His point of pride is a “clean room,” where workers pour over documentation and computer readouts. They were testing a mini assembly line to create battery covers for electric cars.

“Some things, we’ll have to toss out and start all over again,” he said. “As you can see, the future of electromobility is already here.”

2020 Kia Niro
Ford Mustang Mach-E And Tesla Model Y Caught Charging Together For The First Time
Tesla’s (TSLA) Elon Musk is within striking distance of a bonus worth $1.8B in options
DHL to cut 2,200 jobs at Jaguar Land Rover plants
Tesla Model Y 70 MPH Highway Range Test: How Far Did It Go?