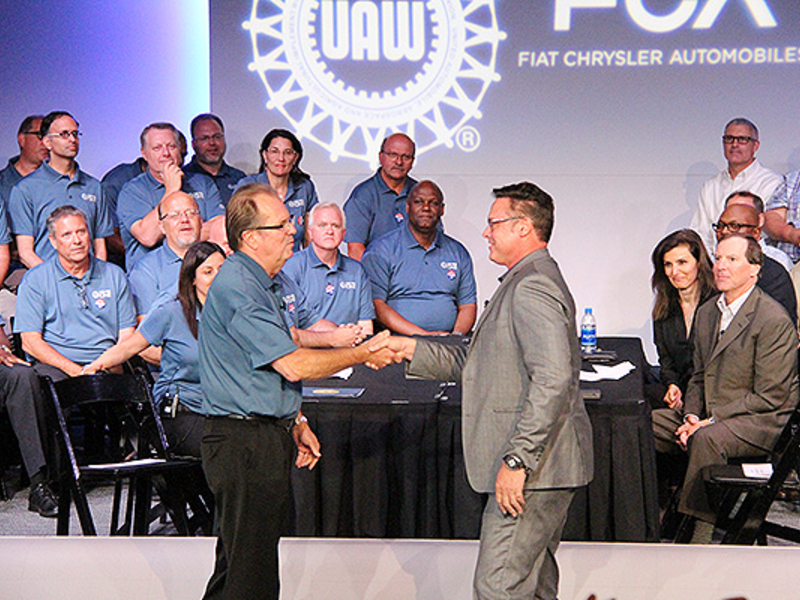 DETROIT — UAW members at Fiat Chrysler Automobiles will have to wade through a sea of controversy when voting on a new contract.

Blockbuster developments keep popping up as the automaker, embroiled in scandals while looking to set itself up for the future with a merger, tries to finalize a deal with the union. The potential tie-up with PSA Group and an ongoing corruption probe into the UAW already were casting large shadows over negotiations.

Then General Motors delivered another shock last week with its racketeering suit against FCA and three former executives. The timing stirs up more uncertainty at an inconvenient moment for FCA.

FCA views the timing of the lawsuit as a way to disrupt its contract talks and the PSA merger. In light of the controversy, the company says the merger talks are progressing smoothly. A person closely involved with the talks told Automotive News there’s “good chemistry between the teams.”

Art Schwartz, president of Labor and Economics Associates in Ann Arbor, Mich., said if he were in the shoes of FCA bargainers right now who have various controversies swirling, he’d simply do his job.

“They know that this is a pattern industry. They probably have some stuff they’d prefer not to be in the pattern, so they’re going to be pushing for that,” Schwartz said. He still thinks they’re “going to go ahead and execute their game plan.”

Art Wheaton, a labor expert at Cornell University, said the UAW’s talks with FCA would have been problematic regardless. He noted that ratification of the first proposed contract in 2015 failed. Wheaton said the lawsuit only makes things worse as negotiations continue. He thinks it was intentionally filed at this time to complicate the UAW talks and a potential merger.

Wheaton said GM could be getting antsy about the possibility of FCA getting ahold of products from its former brands Opel and Vauxhall. “That to me is the best thing the deal has to offer for Fiat and Chrysler,” Wheaton said, “because they can’t build good small cars.”

Wheaton believes a strike is possible if Fiat Chrysler does not go along with the pattern set by GM and Ford.

Ken Mefford, who works at FCA’s Warren Truck Assembly Plant in suburban Detroit, said corruption arose over the years because the union “got too complacent.”

Another worker, who asked not to be identified, said the rank and file have been “played by the international leaders. Still, due to working conditions overall, we need the union.”

“We are distrustful,” the worker said in an email.

Kristin Dziczek, vice president of industry, labor and economics at the Center for Automotive Research in Ann Arbor, Mich., said FCA’s negotiations already were complicated before the GM lawsuit, because of the “fairly rich pattern set at GM and Ford that will be very costly for FCA to follow, and the high expectations that the members have for achieving parity.”

She said FCA benefited in the past by “being able to say that they’re in a weaker position, and that they were less profitable. They had fewer members.” Now, FCA is highly profitable and has more UAW members than GM.

“They’re in talks to merge to become the fourth-largest automaker in the world,” Dziczek said. “It will be difficult for them to make the case that there’s a compelling reason why they shouldn’t take the pattern as it is.”