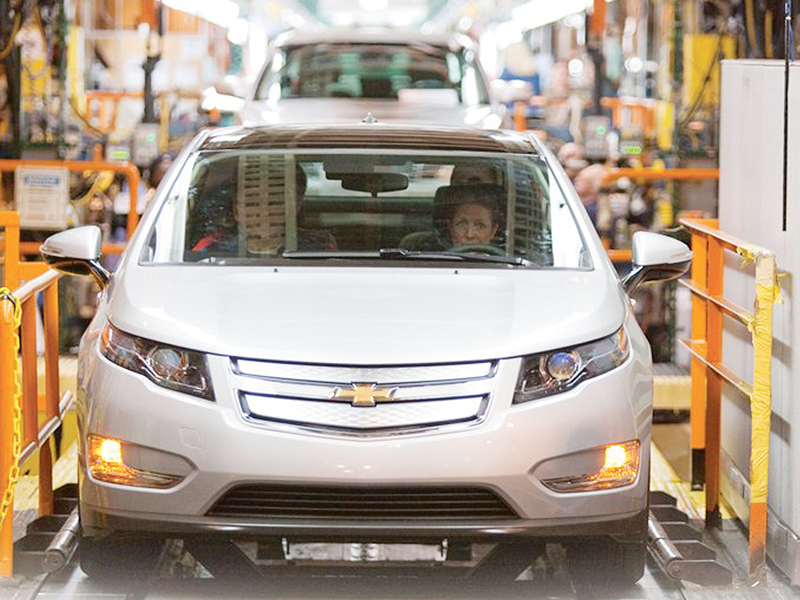 DETROIT — A year ago this week, General Motors told workers at Detroit-Hamtramck Assembly that their plant, which had been limping along on just one daily shift as demand for its aging sedans plunged, would shut down for good.

Instead, GM is giving D-Ham, as the closest plant to company headquarters is known, a key role in its road map to an electric future — along with $3 billion worth of job security for its work force.

“The auto industry as a whole is going toward EVs, and I know General Motors wants to be at the forefront of that,” said John Hatline, a skilled trades trainer who has worked at the plant for more than three decades. “We are looking at a pretty viable future.”

But the plan to save D-Ham with electric pickups, vans and SUVs, as well as the battery modules to power them, is far from a sure bet. With electric vehicles accounting for just a fraction of sales, the billions that GM committed to the plant under its new contract with the UAW represent a huge gamble on an unproven and uncertain market.

And the plant will need extensive retooling to switch from gasoline-powered sedans to battery-electric trucks, meaning workers are still facing the likelihood of a lengthy layoff starting next year.

Production of a pickup and van is scheduled to begin in 2021, followed in 2023 by electric versions of the GMC Sierra and Cadillac Escalade, according to LMC Automotive, a closely watched provider of industry sales and production forecasts. The UAW contract says GM intends to employ 2,225 workers at D-Ham once everything has ramped up, nearly triple the size of its work force today.

“What makes it sort of unprecedented is the scope of EV production at GM,” said Stephanie Brinley, principal automotive analyst at IHS Markit.

The dollar amount GM pledged to D-Ham in the contract signals a long-term shift in strategy. The automaker likely believes that “what they are doing there will affect their manufacturing for quite some time,” Brinley said.

Detroit-Hamtramck is the only one of four U.S. plants targeted for closure by GM’s sweeping restructuring effort detailed last November to be spared by the company’s new UAW contract, ratified last month. The contract formalizes the closure of the three other plants on the list: Lordstown Assembly in Ohio, Baltimore Operations in Maryland and Warren Transmission in Michigan.

D-Ham, so named because the 4.1-million-square-foot factory straddles the city limits of Detroit and Hamtramck, has been severely underutilized since GM eliminated the second shift in March 2017.

GM has not disclosed what the plant’s full capacity will be after EV production begins, but LMC estimates that it will decrease to about 100,000 vehicles per year, from 160,000 today.

The plant is centrally located among GM’s other EV initiatives, including battery manufacturing south of Detroit and Chevrolet Bolt production at Orion Assembly in the far northern suburbs, and close to GM’s engineering hub in Warren, Mich. GM in March said it will build another EV alongside the Bolt on the same architecture.

“You could certainly argue that the center of knowledge is in the Detroit area,” said Ron Harbour, senior vice president of global automotive manufacturing at Oliver Wyman.

Production of the Chevy Volt plug-in hybrid, which started in 2010, was supposed to give D-Ham a major shot in the arm. But the car’s sales fell woefully short of projections, and production of the Volt and the Buick LaCrosse, a large sedan added in 2016, ended in February.

Today, the plant builds only the Cadillac CT6 and Chevy Impala — sedans with combined U.S. sales of 41,108 this year through September. CT6 production is slated to end in January, and the Impala will be discontinued in late February.

LMC expects the changeover to EV production to take about 18 months, which is “reasonable given what they have to do,” said Jeff Schuster, LMC’s senior vice president of forecasting.

GM has not confirmed the changeover timeline, but a spokesman said “there will be some significant downtime as the plant retools for its future product.”

GM will have to prepare the plant not only for the manufacturing requirements of EVs, but also for pickups and vans. If they are designed as body-on-frame vehicles, the plant’s body shop will have to adjust to build a box separately, Harbour said. “It also means a major change for the paint shop because of the pitch of the vehicle. It’s much longer if it’s a full-size pickup.”

Depending on how GM decides to build the EVs, a significant change could be fitting the vehicles to carry batteries, either through an updated floor pan or an all-new underbody, Harbour said.

Big retooling projects typically cost $1 billion to $2 billion, but “this is not the same thing as a normal plant changeover,” said Patrick Anderson, CEO of Anderson Economic Group, a research firm in East Lansing, Mich. “This is a bet on a new technology that’s intended to build products that American consumers aren’t yet buying.”

Opened in 1985, D-Ham is one of GM’s newer plants. The company’s plan incensed many in the region, not only because of the jobs that would be lost, but also in light of the controversy that surrounded its construction.

Detroit used eminent domain to clear out numerous homes and churches in Poletown, a large Polish-Catholic neighborhood, on behalf of GM. The region’s oldest Jewish cemetery is still located on the site.

Initially, GM filled the plant with robots as part of a strategy to compete with Japanese automakers that were rapidly gaining U.S. market share. But after the robots smashed into each other, as well as the cars, GM realized it could “do better with having more of the human element to stop the line and have more of a direct influence on quality control,” said Bernard Swiecki, director of automotive communities for the Center for Automotive Research.

The plant has “a high-tech thread running throughout its history,” he said. “Initially, it’s not because of what product was made there but because of how it was made through all the robotics. And then it was the plant for the Chevy Volt, which was cutting edge, and now this huge investment into electrified vehicles.”

GM is likely to receive significant incentive money from Detroit and the state of Michigan for its planned investment in the plant. One available incentive to manufacturers that renovate or expand aging facilities or establish high-tech operations can reduce the tax on machinery and equipment by about half, Anderson said.

“Without that incentive,” he said, “Michigan’s personal property tax on tools and machines would be so high that we would be closing nearly every factory in the state.”

GM is counting on EV demand to surge in the coming years to get a return on its big investment in D-Ham. It plans to launch 20 all-electric and fuel cell vehicles globally through 2023.

Battery-electric vehicle sales make up only 1.7 percent of the U.S. market, according to J.D. Power sales data through October, up from 1.3 percent a year earlier. The Chevy Silverado alone accounts for 3.2 percent of U.S. sales in 2019.

“Over the long term, EVs will become a much more significant part of the industry. It’s that short and medium term where the payout is far less certain,” said Tyson Jominy, vice president of J.D. Power’s Power Information Network. “Short term, getting consumers over the hump of considering an EV and getting them into the vehicles continues to be the challenge.”

Excluding Tesla, third-quarter retail sales of battery-electric vehicles averaged just 400 a month. “It is extremely difficult to make a business case to sell a vehicle in the U.S. that is struggling to hit 5,000 sales per year,” Jominy said.

EV growth faces major challenges, such as high prices, a lack of infrastructure and concerns about battery range and life span.

“Those are still pretty significant issues to get to the mass market,” Schuster said. “We don’t expect to see significant volume until those are dealt with.”

But GM isn’t the only automaker hedging its bets. Ford, Hyundai, Kia, BMW, Volvo, Porsche and others plan to launch more electric vehicles over the next few years.

At some point, “EVs are going to be the future,” Jominy said. “It certainly makes sense for this kind of investment, and GM is and remains one of the absolute leaders in the space.”

The success of GM’s strategy depends largely on consumer perception of EVs, said Hatline, the D-Ham skilled trades trainer. “If the public embraces it … I think this plant will be here for the next 30 or 40 years.”