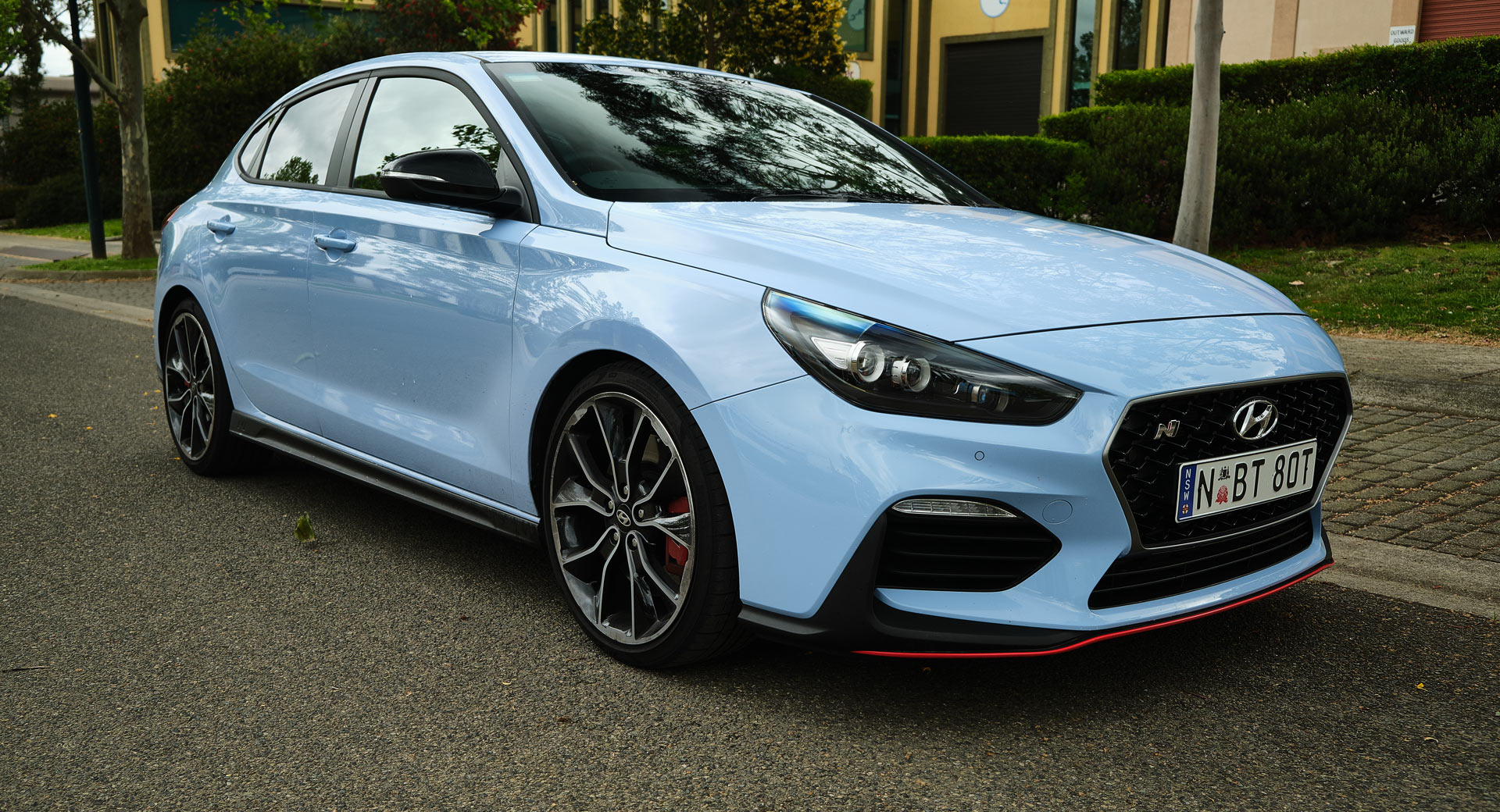 Hyundai’s decision to enter the world of hot hatches with little to no previous experience competing in such a segment was always going to be a risky move, yet it paid off – big time.

From the get-go, it was clear that Hyundai wasn’t messing about. Most notably, it poached BMW M division’s vice president for engineering, Albert Biermann, back in 2015 and quickly appointed him as the head of Hyundai’s newly-formed N division.

The results took everyone by surprise. With the i30 N hatchback, the car manufacturer didn’t just create a car that helped inject new life into the company’s range but one that quickly proved itself as a legitimate rival to the best of the competition, including established rivals like the VW Golf GTI. Earlier this year, we spent a week with the car and were left enamored by its breadth of abilities. Last month, Hyundai Australia was kind enough to hand us the keys to the second N model in its family, the i30 Fastback N.

It shouldn’t come as a surprise to anyone that the i30 N and i30 Fastback N are very similar, but there are some subtle differences that make them appeal to different sorts of buyers.

A powertrain that remains strong 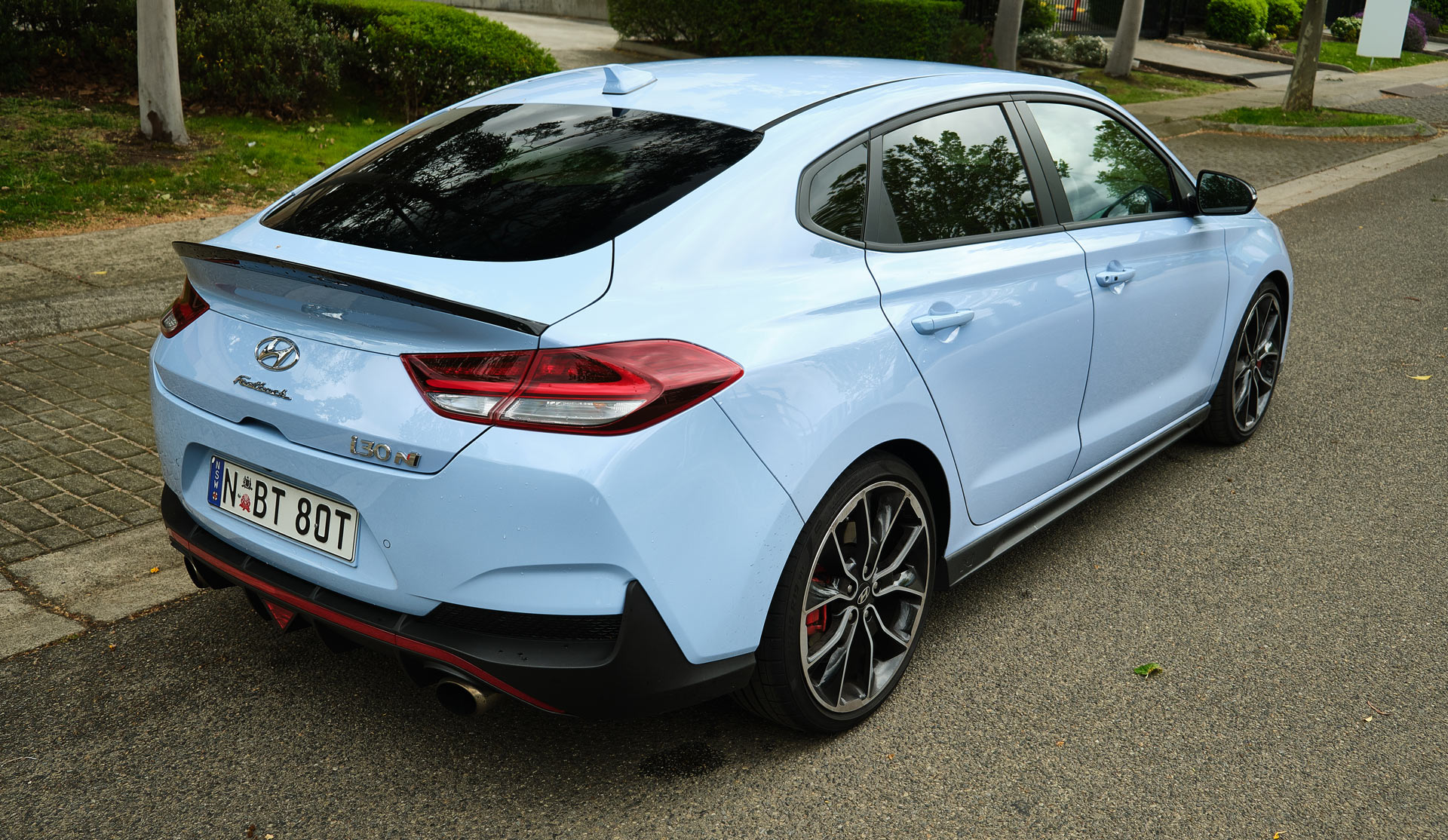 In Australia, the i30 Fastback N comes standard with a 2.0-liter turbocharged four-cylinder pumping out 202 kW (270 hp) and 353 Nm (260 lb-ft) of torque between 1450 and 4700 rpm and up to 378 Nm (278 lb-ft) of torque on Overboost between 1750 and 4200 rpm. Those in the land Down Under are rather fond of performance cars, hence why Hyundai only sells the i30 N hatch and Fastback locally in range-topping specification, rather than also offering the lower-spec 183 kW (246 hp) variant that’s available in some overseas markets.

Mated as standard to this engine is a six-speed manual transmission driving the front wheels through an electronically-controlled mechanical limited slip differential. Up until this point, there are no real differences between the regular i30 N and the i30 Fastback N. 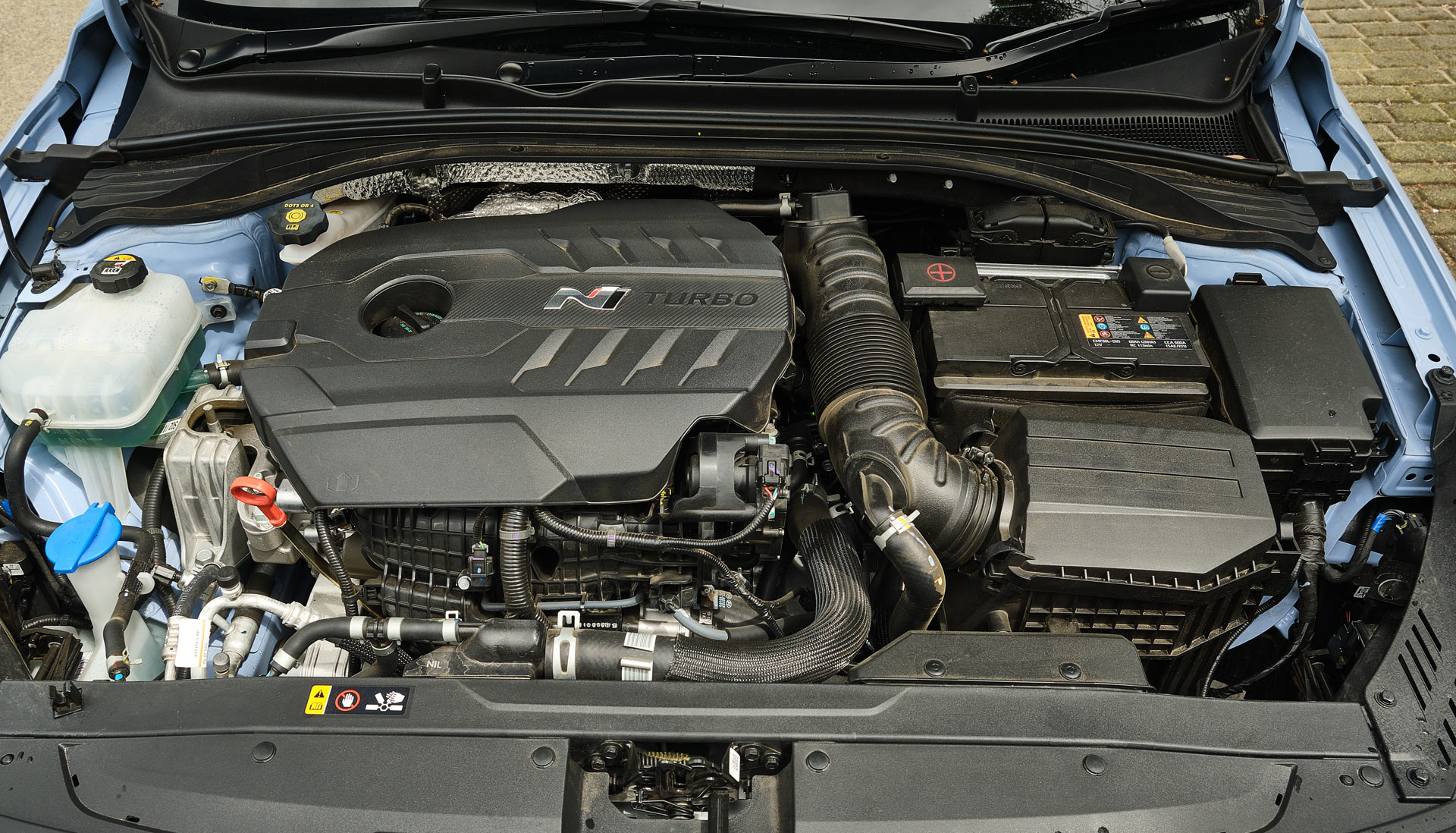 There are , however, some more minor mechanical differences between them. For example, the i30 Fastback N has 5 per cent softer front spring rates and the front anti-roll bar is 0.8 mm thinner. In addition, the bump stops used are 6 mm longer and 10 per cent softer than the hatchback and there’s a new front rebound spring that aids in better ride quality.

With the Fastback shape, the car is 120 mm (4.7 inches) longer and 28 mm (1.1 inches) lower than the hatchback. Both the wheelbase and width remain identical. The slightly larger proportions of the i30 Fastback N mean it is 12 kg (26 lbs) heavier than the hatchback. The car also sits 21 mm (0.8 inches) lower, giving it a 0.297 drag coefficient compared to the 0.320 Cd of the hatchack. The sprint to 100 km/h (62 mph) is dealt with in just 6.1 seconds compared to 6.2 seconds for the hatch. Such a small difference is impossible to pick, but it’s there.

Hyundai has engineered a masterpiece with the i30 Fastback N’s powertrain. From the moment you stab the throttle, it becomes apparent that this car means serious business. Pin it from a standstill and you’ll likely experience a little wheel spin or wheel hop from the front tires at the top of first gear, inevitably hurting the aforementioned acceleration figure slightly. To avoid lighting up the front tires, I often found myself short-shifting into second and making the most of the mighty in-gear torque that shoves you in the chest and pins you back into the seat. It’s intoxicating power and feels remarkably linear right up until the redline at 6750 rpm. 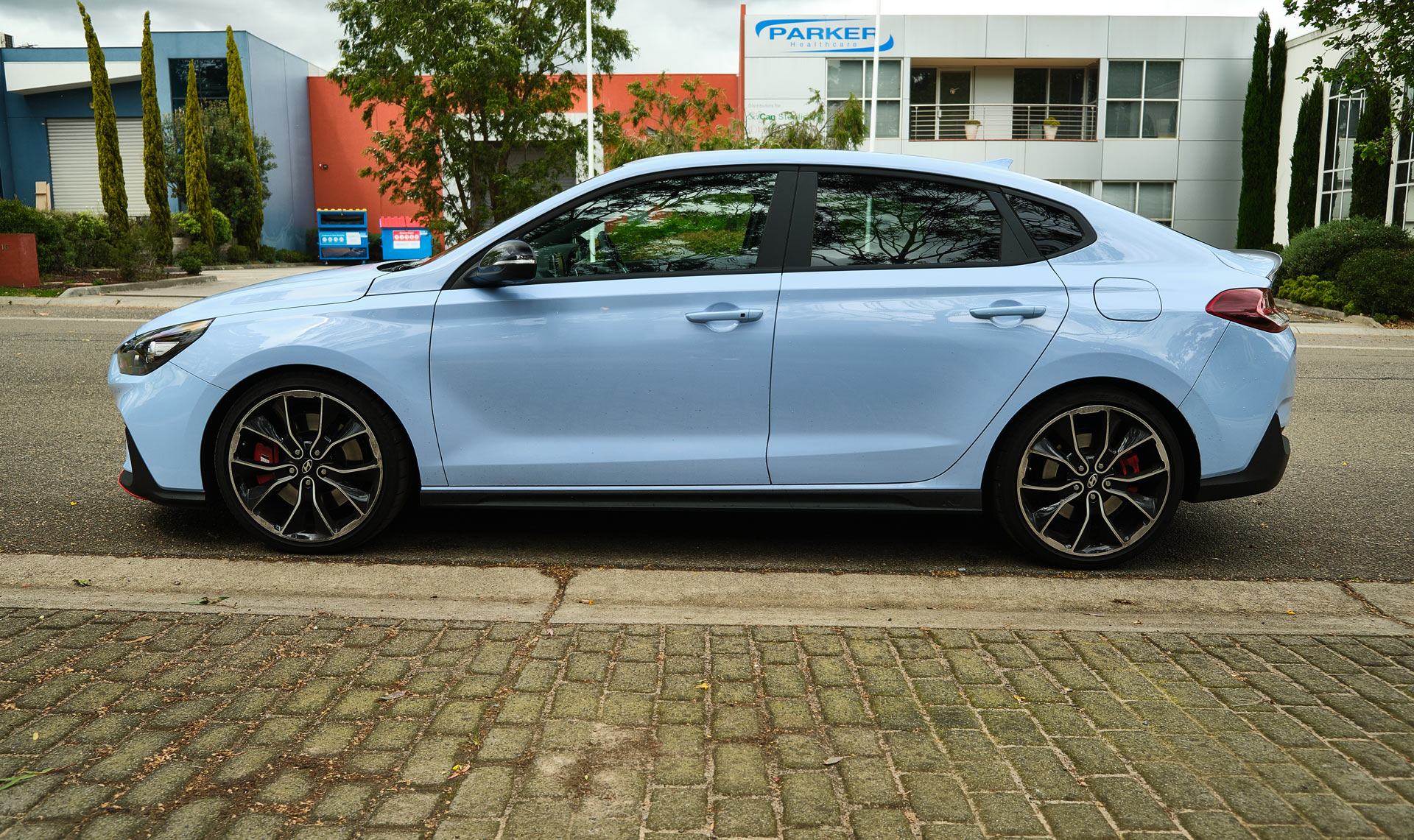 Adding to the thrill of driving the car is the launch control function, although it is finicky to operate and doesn’t always want to kick in. Apparently, you need to put the car in N mode, ensure the ESC is in Sport mode, push the clutch all the way in, engage 1st gear, quickly pin the throttle, and a message should appear telling you that launch control is enabled. When enabled, drivers can use the cruise control system to adjust the rpm that they want the car to hold. The system does work but not every time, and even when it is used, acceleration doesn’t feel any more brisk than without it enabled.

Begging to be driven hard

What the car loves is corners. And when I say ‘love’, I really mean it. Driving the i30 Fastback N for a week, primarily on suburban roads, it feels like a caged tiger pacing back and forth in a zoo just waiting to be released into the wild. By no means does it feel restless during everyday driving. Quick the opposite, in fact; it is very refined and easy to drive, especially with Comfort mode enabled. However, it’s impossible to not get the sense that the car just wants to be really used. I give in and head to the hills.

Unlike the Honda Civic Type R, the i30 Fastback N, just like the hatch, offers drivers lots of customized drive configurations. My ideal setup involved setting the engine to Sport+, the rev-matching to Sport+, e-LSD to Sport, exhaust to Sport+, steering to Normal, suspension to Normal, and ESC to Sport+ allowing for some oversteer. If you’re brave, you can slot the steering into Sport+, but after a spirited 10-minute drive through some twisty roads it’ll feel like you’ve done a rigorous gym workout. 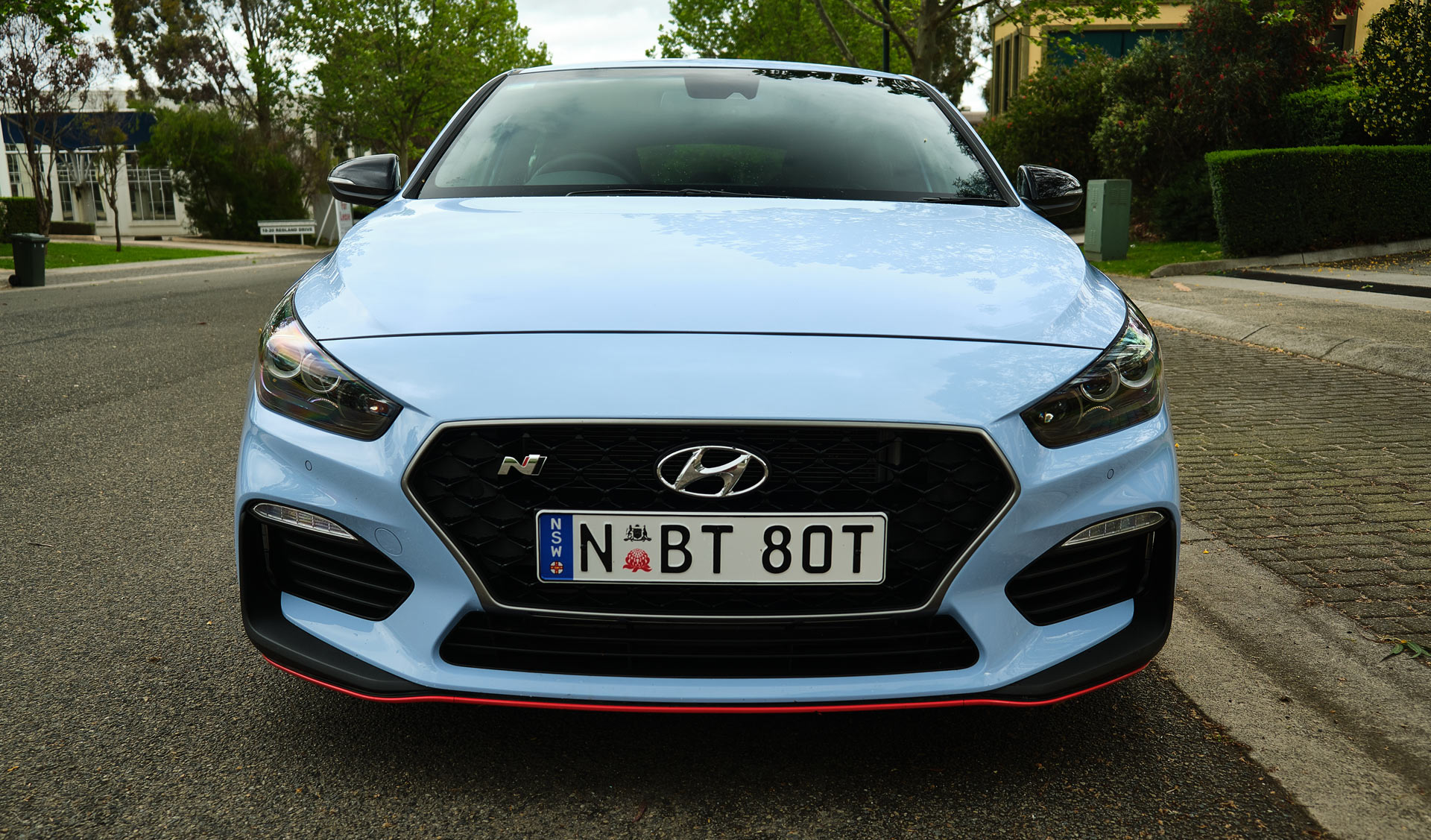 Immediately, the car inspires confidence. Push it harder and harder into corners and it rarely feels out of shape unless there’s an unexpected undulation through a turn. The 235 mm wide Pirelli P-Zero rubber offers extraordinary amounts of grip and understeer is virtually non-existent. The second piece in the remarkably handling puzzle, alongside the tires, is the e-LSD that shuffles power between the front wheels whenever you need it. It’s so effective that flooring the throttle in the middle of a corner doesn’t incite any understeer and instead sucks the car straight into the apex of the corner. Up a mountain road, I’ve got no doubt the N could corner faster than some all-wheel drive cars.

If I were to drive with a blindfold on and jump between the i30 Fastback N and the hatchback, I doubt I’d notice any differences in the driving experience – they feel identical. Where the Fastback does feel a little different is in the cabin. 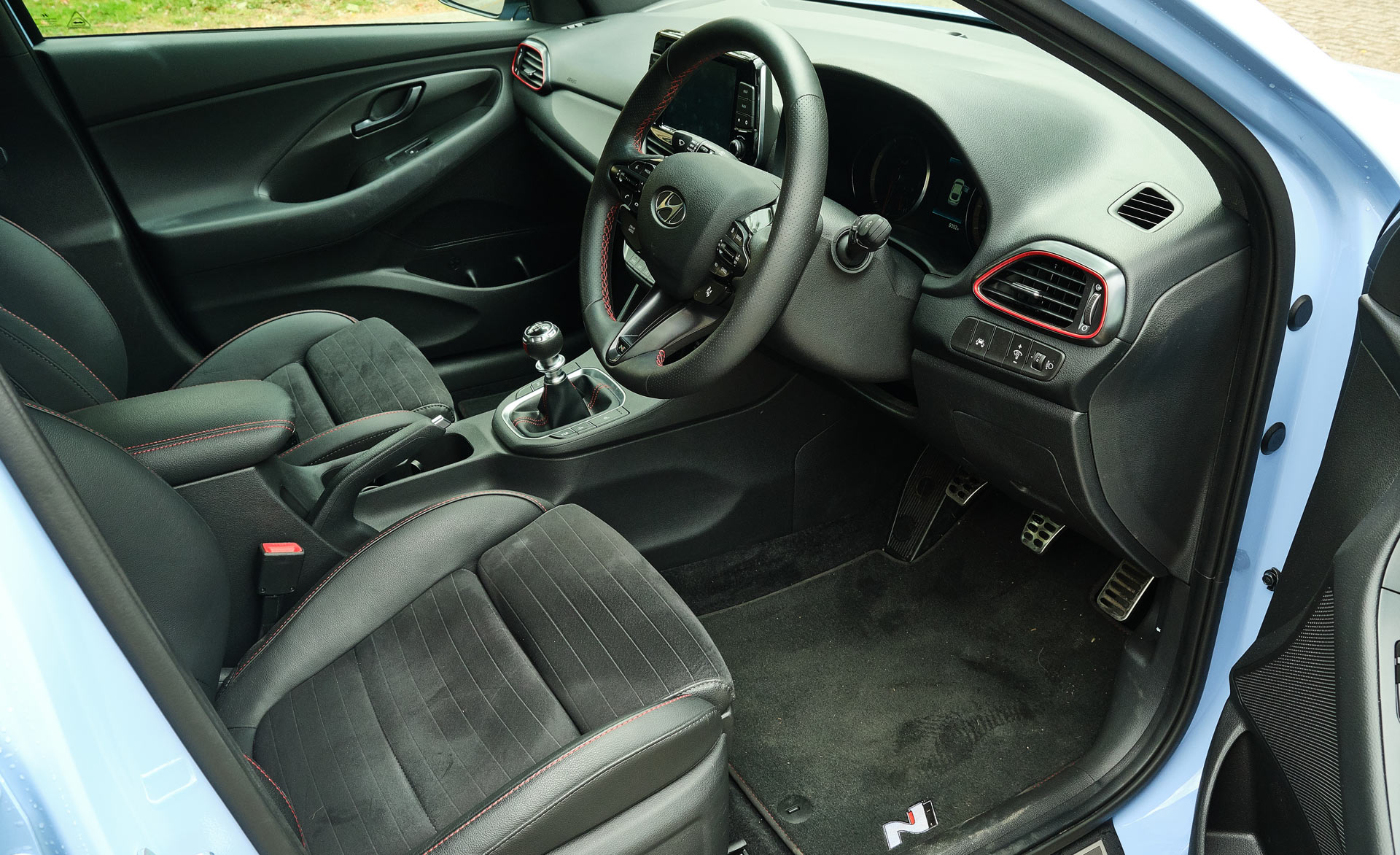 For starters, my tester came complete with power-adjustable seats with memory functions, something the hatch I drove lacked. In addition, Hyundai has ditched the light blue performance buttons on the steering wheel of the hatch in favor of simple black buttons. Both front seats also featured a heating function and the steering wheel was even heated. It also had push-button start. These small elements do make the car feel slightly more premium, while buyers can also opt for the Luxury Pack that includes a panoramic sunroof.

Luggage space sits at an impressive 450 liters (18.9 cubic-feet), a full 55 liters more than the hatchback. Treat the car gently and it will return 8 liters per 100 km (29 U.S. mpg) over the combined cycle. Achieving that figure would require the gentlest of right feet,though, something that’s hard to have while driving a car like this. 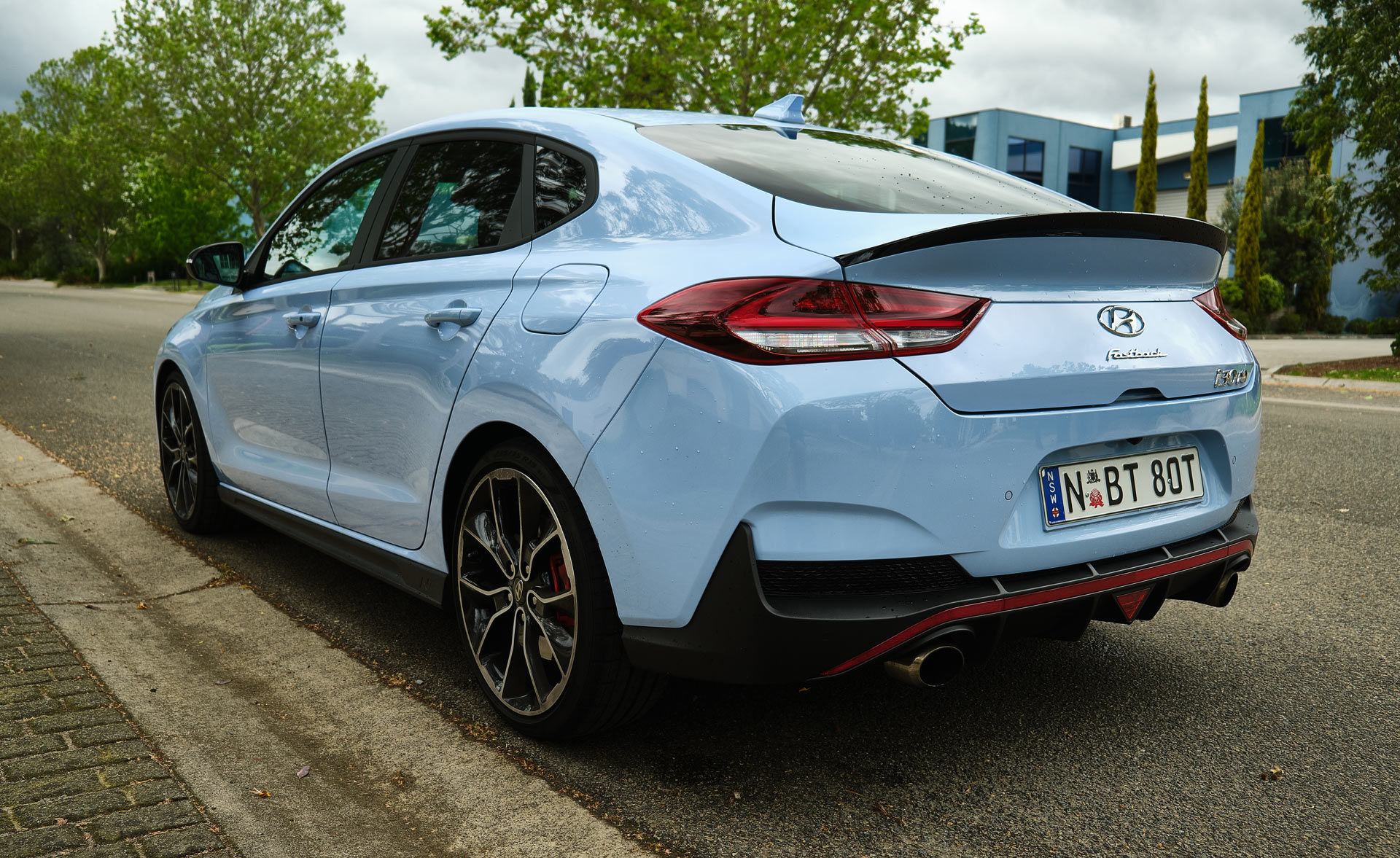 Aussie pricing for the Hyundai i30 Fastback N starts at $41,990 (US$28,721) plus on-road costs, making it $2,000 more expensive than the hatchback. Which would I prefer? Probably the hatchback, purely because I remain unconvinced of the shape of the Fastback’s tail. Either way, the i30 Fastback N is another feather in the cap of Hyundai’s N division and indicates the carmaker will continue building performance cars that hit it out of the park for years to come.