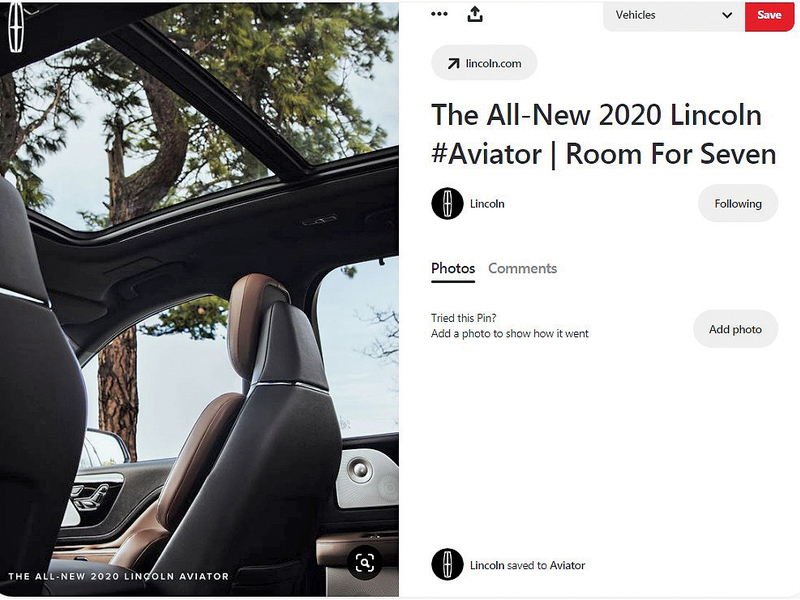 LAS VEGAS — One of the tenets of Lincoln’s reclamation is a focus on building interiors that feel like sanctuaries.

The brand has found an ideal platform to push this messaging: Pinterest, a website that allows users to search for photos or videos and “pin” them on virtual boards showing their interests. The boards often end up reflecting the luxurious tastes of its users, who tend to skew toward the upper end of the vehicle market.

Lincoln is one brand working to leverage the Pinterest crowd’s affinity for expensive vehicles. The site’s research has found that it reaches 60 percent of adults with household incomes of at least $100,000 and 80 percent of women in six-figure households.

Lincoln is using Pinterest to tout the expansive sunroof of its new Aviator crossover, along with the vehicle’s ability to “embrace” drivers by lowering itself as they enter the vehicle.

Lincoln media manager Matt Weber said the brand has promoted the Aviator on the site with “a mixture of paid and organic content.”

“We know that luxury customers have very complicated always-on lives,” Weber said during a presentation at the J.D. Power Auto Revolution in Las Vegas last month. “At Lincoln, we want to tap into their desire to be inspired and provide them with something that is really rewarding and positive in the vehicle. We do that by elevating the cabin experience.”

The Aviator content on Lincoln’s page, which funnels people to lincoln.com, runs through a gamut of features that would stand out to a luxury-minded “Pinner,” a name for Pinterest users. The brand also highlights the Aviator’s suspension, sound system and leather-trimmed “perfect position” seats that offer a massage feature.

The Lincoln page also has boards with artsy shots showcasing the Continental sedan and vintage Lincolns.

When users add a vehicle pin to their board, Gray said, it’s like taking a step closer to ownership. Getting the vehicle then becomes “a tangible embodiment of achieving their aspirations,” he said. “Over three-quarters of them say that they bought the car to achieve a personal goal.”