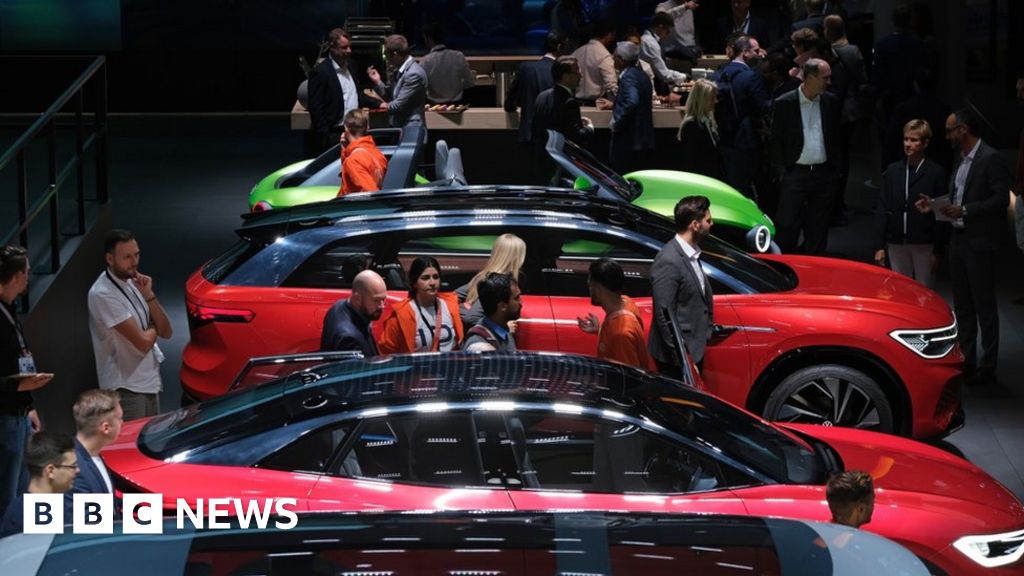 I have a love-hate relationship with international motor shows such as this week’s extravaganza in Frankfurt.

On the one hand, if you like cars, if you have a single drop of petrol in your veins, it’s impossible not to be impressed by the array of awesome engineering on display. And that of course is the general idea.

Manufacturers spend huge sums developing their latest four-wheeled fantasies, laden with up-to-the-minute electronic gizmos, which apparently will do everything for you except brush your teeth. They want you to be impressed.

But there’s a very big downside as well. The sheer scale of these events is staggering. Hundreds of exhibitors and hundreds of thousands of visitors are crammed into a series of giant pavilions, each the size of many football pitches.

On press day, every manufacturer has its own presentation, complete with flashing lights, wall to wall video and a booming soundtrack. Many of them happening at the same time.

It’s hot, stuffy and very, very noisy. Getting around is a major chore, especially in Frankfurt, where it can take 20 minutes to get from one side of the show to the other. I walked more than eight miles (13 kilometres) yesterday, just moving between interviews. As a colleague put it, “why does BMW have to be in another bloody postcode?”.

So why bother going? Well, for a start, it is a great way to take the pulse of the industry, to see what people are thinking, and what they’re worried about. I’ve attended far too many of these shows in my career, but each one has been different.

For many years now, the dominant themes have been electrification and automation.

At the major European shows in Frankfurt, Geneva and Paris there’s been endless speculative talk about the need to develop battery powered cars, and about how we’ll live with self-driving machines.

Porsche set to lead the charge at Frankfurt show

Electric car models to triple in Europe by 2021

But here in Frankfurt, what used to be speculation is becoming reality. The launch of Volkswagen’s ID.3 is being seen as a landmark moment. Not because it looks particularly flashy or exotic – it doesn’t – but because this is the first purpose-built electric car the German giant has produced, the first fruit of a €30bn (£27bn) investment programme, designed to turn the company into a market leader in electric cars.

There’s an irony here, of course. Four years ago, Volkswagen was a very different company. It was during the 2015 show in Frankfurt that the US environmental authorities dropped their bombshell, accusing the German company of deliberately manipulating emissions tests. Executive heads rolled, billions of dollars in fines were paid, and the company embarked on a very different corporate strategy.

Now the VW Group is well positioned to hit the front in a race to produce electric cars which other manufacturers have had no choice but to join – although established players in the market for affordable EVs, such as Renault, Nissan and Kia, can be expected to fight for every sale.

New EU rules which will be phased in from next year will force manufacturers to reduce the average emissions from their car fleets dramatically, or face hefty fines. Because the rules will apply to new car registrations, they won’t be able to design a few token low-emission models and leave them in a dark garage somewhere. They will actually have to sell them.

It’s fair to say this is making some car firms a little nervous. One problem with electric cars at the moment, leaving aside arguments over issues such as charging points, is that they cost more to build than conventional cars. That means prices are higher, yet they are less profitable to sell. That may change as the market develops, with economies of scale coming into play, but at the moment it is an issue.

Manufacturers, then, have been spending a great deal of money to develop new cars that will probably produce lower profits than existing models, at a time when the industry as a whole is facing up to a slowing global economy, falling sales in major markets and the effects of mounting trade tensions. The chief executive of Jaguar Land Rover, Ralf Speth, told me it all added up to a “perfect storm” for the industry.

Perhaps it’s no surprise then, that this show has seen fewer eye-catching concept cars than other recent events. I’ve become accustomed to seeing wacky fantasy models which claim to show off how self-driving cars will be integrated into our lives – such as Renault’s car-in-your-living-room .

Not so this time. Manufacturers are more concerned right now with getting electric cars into production and on sale than indulging in futuristic dreams. Of course, automated technology is still being developed at breakneck pace – and advanced systems, such as lane-keeping assistance, are finding their way onto cars in the showrooms. But most of the really sci-fi creations have been put away.

Not all of them though. Audi has still brought along its AI:Trail, a concept for a future self-driving off-road vehicle. It looks rather fearsome – a cross between a lunar buggy and something out of a Mad Max movie. With drones for headlights.

If the future really is dystopian, Audi at least will be ready.

EV upgrades may be final straw for some Cadillac dealers
This Mazda Miata Is Trying Hard To Be A Mini-Me Cadillac Eldorado
2021 Lincoln Aviator
Once again, Nissan turns to the Z for a dose of healing
Mazda North America elevates Brad Audet to marketing chief