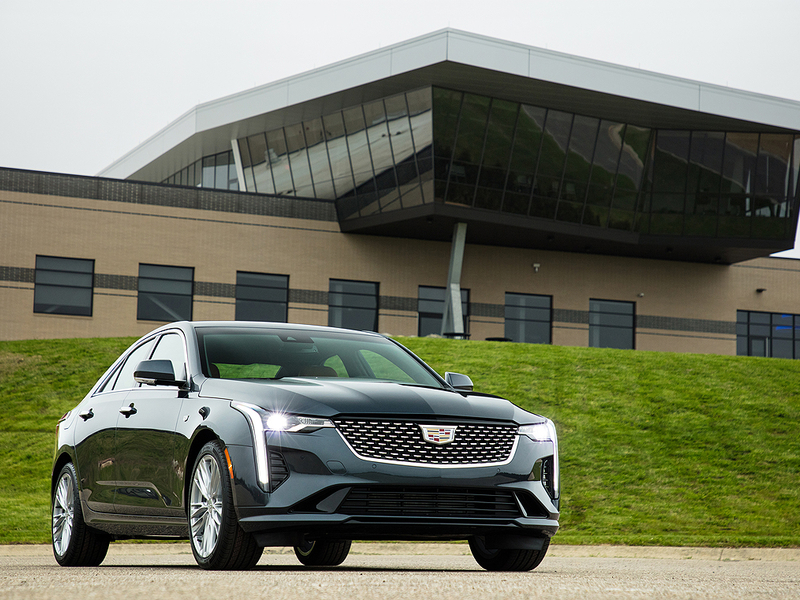 Cadillac on Thursday completed the reveal of its revamped sedan lineup with the CT4, a rear-wheel-drive compact that replaces the ATS as the brand’s lowest-priced nameplate.

The 2020 CT4, which will be available for ordering this year, is slightly bigger and heavier than the ATS. It comes with a choice of two turbocharged four-cylinder engines, with no V-6 option offered.

Cadillac has not yet announced pricing, and a spokesman said only that it would be less than the CT5’s $37,890 base price including shipping.

The CT4 is the fifth new or redesigned nameplate in the brand’s product overhaul, which includes one vehicle introduction about every six months through 2021.

Cadillac, which revealed the CT4 through a social media campaign that simulates its driving experience, showed the V-series version of the car at the Detroit Grand Prix in June.

The CT4 is powered by a standard 2.0-liter turbo or an optional 2.7-liter Dual-Volute turbo. The base engine is paired with an eight-speed transmission, while the 2.7-liter comes with a 10-speed.

The 2.0-liter engine produces 237 hp and 258 pound-feet of torque, vs. 272 hp and 295 pound-feet of torque for the 2.0-liter version of the 2019 ATS. The CT4 is about 4 inches longer than the ATS, which could explain some of the disparity, but the CT4’s engine also was tweaked for better torque response at lower speeds so drivers can make quick cuts, a Cadillac spokesman said.

Like the CT5 revealed in March, the CT4 has a softer, rounder silhouette than other vehicles in Cadillac’s lineup.

“We developed CT4 to appeal to youthful buyers in the luxury market who may be new to the Cadillac brand,” Andrew Smith, executive director of global Cadillac design, said in a statement. “The vehicle was intended to draw attention, using a combination of great proportions, taut surfacing and Cadillac family details that hint at the athletic driving experience this vehicle offers.”

The CT4 Luxury and Premium Luxury models feature bright exterior accents and grilles with hot foil stamping. The Sport and V-series versions have darker accents and details geared toward performance, such as rocker extensions, a rear spoiler and performance design wheels.

Continental self-sealing tires also are available on the CT4. All-wheel drive is available on all four trim levels, and the Super Cruise hands-free driving system will be available to CT4 buyers starting sometime in 2020.

The CT4 will be built in Lansing, Mich. Cadillac said pricing will be revealed closer to the start of regular production.